Dreams from their 2008 Obama

Dreams from their 2008 Obama

Thanks to reader Will who spotted this in Breckenridge, CO, and writes:

Not even sure what this one is supposed to mean …

It means that there are people out there in small bistros and cafés hoping that their 2008 Obama is gonna regenerate and he has not. And it’s not surprising then they get bitter, they cling to their dreams from their 2008 Obama, and have antipathy to people who don’t think like them or anti-Tea Party sentiment or anti-rich sentiment as a way to explain their frustrations. 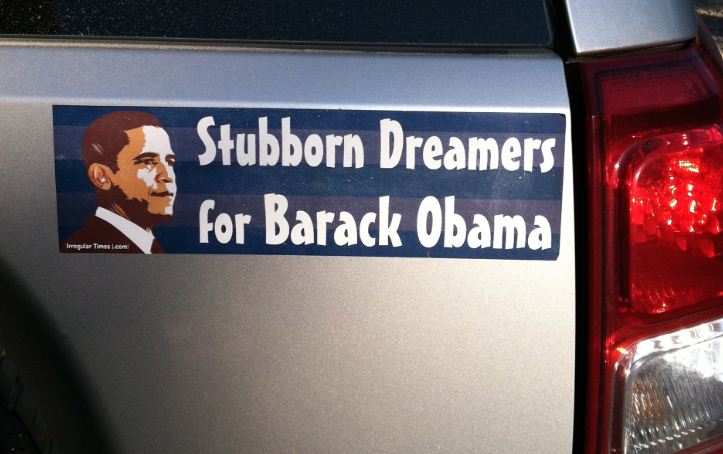 Each morning I look forward, with great anticipation, to your license plate post. Just like Hot Air’s Obamateurism of the day, you start my day off on the right foot. Keep up the good work!

Keep those photos coming, the bumper stickers series is a hungry beast which must be fed.

I think people who cling to their guns are far better off. At least they have something that’s tangible.

I’m wondering if it has something to do with the “DREAM” act supporters.

Eh, I read it to mean their meds aren’t working.

As the hippies used to say:

Reality is for people who can’t cope with drugs.

No surprise, really: something around 20% in Rasmussen polls still “Strongly Approve” of BO.
Which I still find astonishing.
Me? I’m stubbornly clinging to gravity making things fall to the ceiling, and the sun rising in the south. Despite the annoying facts to the contrary. It’s hardly more irrational than the lunatics who continue to support the amateur, failed collectivist poseur currently in possession of the White House. Anxiously waiting to see his eviction notice, next November.

Would you look at the picture of obama. He actually looks nice and uplifting instead of the harassed, bitter guy he is today. There are none so blind as they who will not see. Evidently there are still a lot of blind followng this POS. But to see him in this light is truly blind.

The obama today looks like he is ready to implode. It must be a mind destroying thing for a narcissist of his caliber to fail so magnificently when he thought he could not fail at all. He would tell you, however, that his failure is all our fault because we impeded him and his wonderful policies. I am perfectly willing to take any credit for this that I can.

Ever notice how our presidents age while in office. The job is not all parties, date nights, vacations and golf games. It is a horrific responsibility and not for the faint of heart. Having no knowledge of life in real time, obama thought it was going to be fun to be more important than anyone else in the world (in his eyes that would be as it should be). Most of the presidents have done their job to the best of their abilities with the wellfare of the country coming first. No so, obama. In his eyes, we are too big for our britches and need to be brought down a peg or two.

I don’t find it astonishing that so many still follow him. I will never forget during the campaign of 2008 the girl, among others, who was interviewed with the contra question of did she support Palin being obama’s running mate and she, giving off vibes that she knew what she was talking about, said she did. She was very self assured and others interviewed on the street did not know who that VP or any other member of the government was. These are the people who are voting for our representatives. These are the people who elect idiots who talk of Guam tipping over because of too many people on it to make our laws. These are the people who get something for nothing and want it to continue.

I think a very potent form of hashish might be involved here.

My screen saver is a picture of an Obama ’08 bumper sticker on the back of a mini-van. The license plate says, “support the arts”, and there is a sticker supporting a local left-wing radio station. The last bumper sticker says,”Not fooled by the government”. Classic cognitive dissonance.