As Obama talks up Son of Spendulus, it is important to remember how his promises of job creation fared last time.  Below are two charts, the second new for this post. …and my own Photoshop of the graph, focusing only on the human toll of Obama’s broken stimulus promises. These people are generally did not become unemployed in the first place because of Obama’s broken promises, although some surely did lose their jobs thanks to his commitment to crippling regulations on those businesses that aren’t lucky enough to be members of the Crony Capitalist Club.  However, Obama took responsibility for putting a certain number of the unemployed to work, and he failed miserably by his own metric. 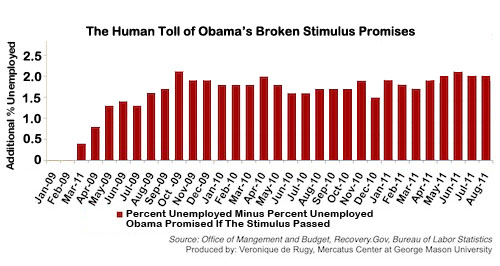 Let’s not get fooled again.

Don’t you think it at least somewhat disingenuous that the first graph starts at 6%? Kinda throws the proportions of maybe?
Criticism is good, fair criticism is better.

Basically, it’s close to the same unemployment, assuming these figures can be terribly accurate. Little blips are not real meaningful, only movement that indicates a trend. Importantly, the massive infusion of stimulus did nothing (the Democrats argue that it held the line). Here’s a good easy-to-read article on FDR and the Great Depression, which explains why the Democrats are wrong. http://www.fee.org/articles/tgif/news-flash-fdr-didnt-fix-the-economy/ Here’s another that’s more “moderate” and a little rosy (WW II probably fixed the Depression), but in the interests of “balance”: http://money.cnn.com/2009/02/10/news/economy/yang_newdeal.fortune/index.htm

“…Obama constantly reminds us, with some justification, that he was dealt a difficult hand. But the evidence is overwhelming that he played it poorly. His big government spending, debt and regulation fix has clearly failed. Relative to previous recoveries from deep recessions, the results are disastrous…”

The other number worth considering is “discouraged workers,” which has been rising dramatically in recent calculations, and which lowers the official unemployment rate and masks the size of the problem. The percentage of employed, working-age adults is most tellingly at an all time low.

As far as the hand he was dealt, Mr. Obama asked for the job and said he could do it. (But, agreed, he played it as poorly as possible.)

The other side of that coin is the underground economy, in which people reported as unemployed are actually employed, just as drug dealers, pimps and prostitutes.

Doesn’t anyone find Obama’s verbal tic curious? Washington must put people to work. Congress must do X. This bill will do Y. What the hell is this? It’s almost as if Obama believes Americans are helpless proles who are too stupid and lazy to do anything for themselves. Feh. This man does NOT understand Americans or what makes us exceptional. He’s spent his entire life as a societal parasite, standing up for parasites and relying exclusively on the generosity and apathy of the host organism.

Success for Obama has ONLY ever been defined as enlarging the parasite class at the expense of the ever-generous host. And now the host has decided that the Chief Parasite and his parasite-class have gorged enough. What a fool.

Notice the economy was shedding jobs at an increasing rate through 2008. With passage of the stimulus at the beginning of 2009, this trend reversed, jobs losses slowed, then were slowly added. Since the stimulus has petered out, job creation has stalled.