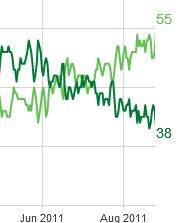 I would not put too much weight on this.  Yes, it is reflective of a growing discontent.

But for reasons which are beyond me, Obama remains personally well-liked.  Don’t be complacent, or underestimate his ability to overcome unhappiness with his performance.

The Axelplouffe strategy will be to tear down the Republican nominee and make the election about everything other than Obama’s job performance.

I don’t think that many people actually like him personally, I think many are still afraid saying that they don’t like the black guy will seem racist.

But you’re right about not getting complacent. He’s wounded, but he’s got the power of the White House and an all-in media behind him, and a poor nominee choice on our part can still hand him a very solid victory.

Curtis, when the media has to show Obama sitting in on Hurricane Hype Command Center, they are struggling to give Obama some credibility as to leadership. When photos are shown of the multiple teleprompters just to speak to 6th graders, one has to question that meme of the “smartest man to ever occupy the Oval Office.”

Like him personally? How do you judge you like someone personally when you have never met them? Is this an example of the “cult of personality?” I love Willie Nelson’s music (he’s a brilliant song writer) but personally, I don’t like HIM. He’s Nashville’s answer to Dennis Kucinich or Ron Paul.

I think American voters, as more of them wind up on the unemployment list, are going to care less about likability and more about capability.

No matter how well liked he is, O has shown over and over that he’s not a leader and has no plan other than to raise taxes and expand government. When people are out of a job or are hurting financially, I have to believe they’re going to pull the lever for his opponent. If he should happen to get reelected, than we’re in sorrier shape as a nation than I thought, and that’s very frightening.

Professor, it seems some pundits are a little more concerned with the falling approval rates than you are. Today Politico (now officially a member of the Obama press) has an article asking “Is Rick Perry Dumb?”

Seems I remember this very thing about Ronald Reagan. He was a “cowboy”, an actor, not very smart, yada, yada. The only things that are certain are death, taxes and the left-wing statists labeling any conservative as “dumb.”

One of the first lessons I learned upon entering the computer network profession (after 30 years or so as an auditor) was that intelligence manifests itself in many different ways. Previously, I had thought that anyone who sounds dumb probably is. In the computer business, I encountered numerous people (native speakers of English) who could hardly utter a complete sentence and for whom grammar was a foreign concept. But, put them to work on a thorny computer problem and they would perform miracles. Were these people dumb? Not in my book.

Perry doesn’t sound dumb to me (folksy maybe), but he may to some Eastern elites. But you can’t fault his political acumen. At worst, he knows how to find and follow good policy advice. That’s not bad, not bad at all.

People are willing to declare their ‘liking’ for individuals with whom they differ in most attitudes, particularly if the individuals are worthy of a minority label. It shows that the one doing the ‘liking’ is noble and multicultural. There are exceptions – for instance the ‘principled and tolerant’ leftists who despise GW Bush, and Condoleeza Rice, and Sarah Palin, and Scott Walker, and pull no punches demonizing them.

Has anyone seen the Jeffery Toobin article on Clarence Thomas in the New Yorker? Here’s a leftist who has probably spent the last 30 years singing in the anti-Thomas chorus of ‘dumb, unqualified robotic Supreme Court nebbish’. Suddenly he’s awakened to admit that Judge Thomas is a (choke) real legal scholar, and whose legal reasoning in SCOTUS decisions bears a real threat to outcomes-based blue-state Constitutional distortions.

I have more faith in his competence than his likability.

He’ll whine with self-pity, “Why can’t I just eat my waffle?”

Yet, he wanted to be president, but finds irritating and offensive any question that isn’t a powdered-sugar covered puffball thrown underhand slowly and straight over the plate. While we’re sitting in the stands, watching him at bat, looking annoyed as he waits for the easy pitch he’s convinced he deserves, there are no foot-long Dodger dogs slathered in mustard and relish … only peas … which we’ve been told, just like we’re children, we have to eat.

Each time he swings and misses … and the umpire, yelling “Bush!” refuses to let him strike out. The spectators, now sick of their peas, grow a little restless.

Not only does this batter, who does not belong in the major leagues, have a corrupt and biased umpire behind him, he doesn’t eat peas himself, and arrogantly demands to have his waffle and eat it, too. As if this isn’t bad enough, his team’s manager tells the crowd that the wannabe homerun king “will never allow you to go back to your lives as usual.”

LukeHandCool (who is not a professional sports fan, nor was he a fan of the “popular” kids in school who often wanted him to join their exclusive clique, but whom he found, mostly, with a few exceptions, to be unlikable people).

Obama is well liked as was the Music Man and other schemers in US history. Or people may be shy about saying they disapprove of Obama because they’ve been hectored by the socialist media that they would be racist if they didn’t like him. So they tell the pollsters they personally like him but detest his policies. But at election time you can’t separate one from the other especially with a rabid ideologue socialist such as Obama. Assuming repubs have a credible candidate, we may see another 1984 election, where Obama might not even capture his own state of Illinois.

If history is any guide:

2) We’re FINALLY getting to the point where some late night comedians are taking shots at him, and some news anchors aren’t defending him as vigorously. Its really becoming apparent to the public at large that O’s policies have failed. Its getting hard for anyone to defend him without getting ganged up on by a mob of outraged citizens pointing out negative economic indicators.

Most Americans who like or care for the president, see him, as the MSM reporters portray him, however the obama backstory, has two possible narratives.
#1)
The DNC/MSM/WhiteHouse, for the most part is the accepted bio.
#2)
The other, has been way too disconnected for most, see Rachael Maddow on how #2 is portrayed in the MSM. She only covered his BC, wait for the SSN rhubarb to hit the fan.

In order to accept #2, one must devalue and dismiss the entire DNC/MSM/WhiteHouse narrative. Which most democrats/independents voters have freely accepted to do and have fully rejected #2 “out of hand,” on first glance, second glance, and third glance.

However, as obama’s numbers fall, and voters seek reasons to believe, due to multiple signs of incompetence, political chicanery in behalf of him and his administration. A small percentage will seek comfort, and look into narrative two. Some can justify their initial choice, because they were totally deceived at the highest levels of trust. It was beyond their initial comprehension for #2 to even exist because it was so unAmerican, so deceptive, so ruthless which portray’s obama as con man, usurper and clown.

That is beyond belief to most, however as long as Obama keeps everything in his personal lock box, dems / independents will start looking for reasons to justify them going forward with obama, and narrative #2 is an available option to consider,

If narrative #2 collides with #1 there will be a sudden an immediate impact, which is beyond my pay grade to explain.

Obama’s uncle is another pea placed under the Obama mattress, as some Democrats, stopped eating their peas, and are placing them under the mattress.

One does not get a chance to rest when defending Obama, too hard, too tiring, everyone is exhausted from propping him up.

Obama losing a lot of sleep because his mattress is extremely uncomfortable.