Rhode Island still is without power in much of the state, including my neighborhood.  National Grid is estimating that power will not be restored to the entire town until September 5.

As of yesterday, as reported by The Providence Journal:

Electrical power was the biggest casualty of Tropical Storm Irene –– and the toll grew worse as the storm blew farther north. As the last gasps of wind knocked down more trees and branches overnight Sunday, the number of Rhode Islanders without power actually increased from 284,000 to about 344,000. That’s more than 60 percent of the customers left in the dark.

Besides breaking local power lines throughout the state, the storm also wreaked havoc on 18 of the company’s main transmission lines, breaking them in multiple places, said Timothy F. Horan, president of National Grid for Rhode Island and New Hampshire. Those breaks disabled 22 substations, a third of the total.

The situation is improved, but still bad, as of this morning.

Here is the National Grid map as of this morning (each solid pink lightbulb represent >5000 customers without power).  According to the site, there were still 2,932 outages affecting 112,041 customers (not sure if “customer” is household or estimated number of people): 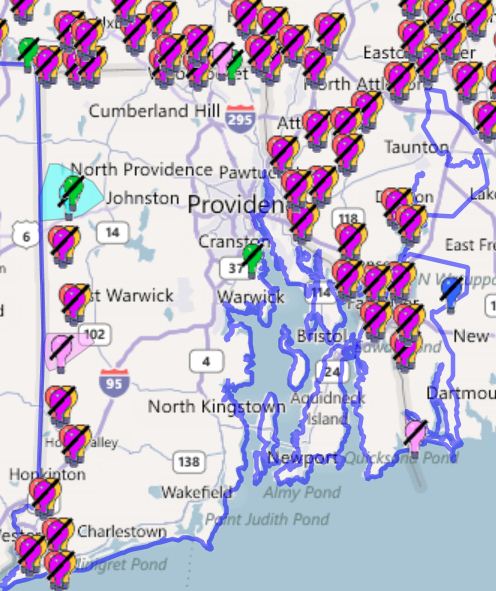 But it seems even “big government” has it’s limitations …

FEMA is making its own adjustments. To make room in its budget for cleanup efforts after Irene, the agency is delaying some rebuilding projects in Joplin, Missouri, where devastating tornadoes struck this year.
“For any projects that have not come in for approval, we’re not going to be able to fund those at this point. We’re going to postpone those,” FEMA Administrator Craig Fugate said at a White House briefing Monday, referring to some efforts in Joplin.
Missouri’s two U.S. senators released statements blasting the bureaucratic move.
“If FEMA can’t fulfill its promise to our state because we have other disasters, that’s unacceptable,” Republican Sen. Roy Blunt said in a statement.
The criticism from the state’s Democratic senator was just as harsh.

I feel for you.

If you think Irene is bad wait until the hits come from Environmental Protection Agency after all the coal plants providing electricity are completely shut down.

America will be like looking at satellite photos of North Korea at night; everywhere will be in blackout except for the light seen in the Statist conclaves NYC, Washington DC, Chicago and Burbank, Hollywood

Hope the power is up and running sooner than September 5. That’s a long time to wait.

No, THIS isn’t hype. It’s merely another playing out of the truth of Smith’s “Theory of Moral Sentiments.”

Its probably safe to assume they have all of their substations energized already – transmission problems get priority for restoration. I’d be very surprised if there were any substations still dead 3+ days after the storm hit. You work from source out – if you’re rebuilding distribution lines fed by a substation that has no power you aren’t getting any lights on.

Richmond got hit hard, as did Norfolk and the rest of the coast. Half of my company is spending the week helping Northern Neck get their power back on (they had 98% out of power Saturday). There’s still about 300k out of power in VA since Saturday, mostly in the Richmond area.

You’d be amazed how far afield linemen go during storms. We had crews from NC and AL in hotel rooms last Friday as far north as DC. As each area gets cleared up, contractors and in-house construction get hired by nearby regions until everyone is on.