This should be Obama’s Dukakis Tank moment, when pure bravado exposed the very perception of weakness the candidate hoped to overcome.

Is there anything worse than a candidate who tries so hard to be something he is not, to fake it so hard that it hurts to watch? 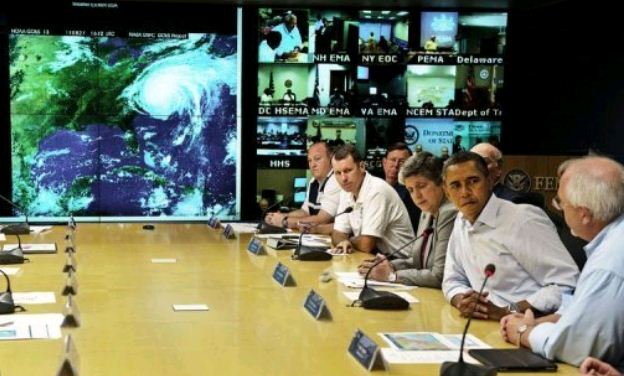 But it probably will not be, because Barack Obama is no Mike Dukakis. Obama has cheerleaders in the mainstream media far beyond Dukakis’s wildest dreams.:

He took charge? What exactly did he do in the few hours after he rushed back from vacation on Martha’s Vineyard, barely having time to scrape the grass off his golf cleats?

He did nothing, but he sure looked good doing it.

What cheerleaders? Oh, Those. via memeorandum.

New federal law just decreed today: Effective immediately, the Federal Emergency Management Office, FEMO, shall consist of President Obama, VP Biden, and others as designated by President Obama. In the event all appointed members of FEMO are engaged in managing concurrent events, a designated substitute, like FOTUS Michelle, may elect to serve temporarily until the event is over, mostly.

So, from now on, disaster events shall by controlled by FEMA, well managed by FEMO.

I say he’s every bit as much a meteorologist as Larry Hagman is an astronaut. Isn’t that Dr. Bellows he’s chatting with?

Obama looks a little taken aback in the picture. Perhaps it’s being gently explained to him that they’re not meteor scientists or like the Weathermen of his youth.

Your observation is a priceless classic, Alf Weedersane!

You nailed it professor…Never waste a crisis?

“I’m concerned about whether the naming of storms may be neglecting Islamic culture and creating feelings of exclusion among Muslim-American young people. Is NOAA making any efforts in that regard? Can the next storm be a Hurricane Jamal, for example?”

Norris: As soon as soon as we start naming storms after Arabic names, you’ll start seeing complaints that it was done to malign those people groups.

It’s the “before” and “after” that are so critical during hurricanes. “During,” not so much.

Before a hurricane hits you make preparations. After it hits you respond with rescue and repair operations. During a hurricane there isn’t much you can do except hunker down and wait it out.

Where was Obama before the hurricane?

I actually felt a little guilty on Friday saying that the White House political team was hoping Irene would be a major disaster so Obama could have the chance to look like a competent, “take charge” leader.

I hate being right all the time.

Delaware was pounded by Hurricane Irene on Saturday night, but Vice President Biden got in one last round of golf in his home state before the heavy stuff started coming down, Fox News has learned.

Biden played golf at a Wilmington-area course on Saturday morning, according to two sources familiar with his schedule.

Asked directly whether Biden played golf on Saturday, Biden’s office would not comment to Fox News.

At least Obama’s handlers were paying attention as Ogremann and his ilk committed media malpractice by blaming Bush (and stoking Bush hatred) after Katrina. Nevermind the mayor of New Orleans and the governor of LA were incompetent Democrat clods.

Of course, it’s preposterous to think they would consider treating Obama the way they treated Bush. They have invested way too much into building Obama up. They will continue to slobber all over themselves to prop him up while simultaneously trying to tear down his Republican opponents.

And the irony of all ironies…CBS has Mayor Ray Nagin of Katrina infammy as a hurricane “expert” discussing readiness. Nagin, literally threw his vulnerable citizens “under the bus”…and I mean that literally! Are these people making these decisions in media truly insane? There’s just no reasonable explanation for a choice like this…brain dead, just completely brain dead.

Cynics, the lot of ya!

Like a seawall of audacious hope … he’s all that stands between us and total destruction.

LukeHandCool (who heard the audio that accompanied the picture: President Obama: “So … we’re in the Northern Hemisphere … and that’s why it’s spinning this way, and not that way, like it would be in the Southern Hemisphere.”

[…] If you act unconcerned like Bush on Katrina, you are screwed. But not as screwed as if you act concerned. Unlike […]

They’re probably discussing how global warming has caused yet another disaster.

Never let a photo op go to waste. This is an administration that understands that perception can be more important than reality.

Save us Oh Great One! Tame the seas…or something like that from his styrofoam pillars speech? There is no end to the shameless carpetbeggaring behavior of the Progs. Entitlement mentality is not limited to entitlement to others treasury…they feel entitled to just make it up as they go, and entitled to our collective acceptance of whatever nonsense they send out for our consumption next.

Hey, how come Conqueress of Evil Jane’ Napoleano doesn’t have a microphone?

No talk, all action?

No hat, all cattle?

Got some very funny breaking news for you: Obama appoints Megazord Hurricane Czar!

Didn’t he already take care of those rising sea levels?

The thing that annoys me about this? These people are at work. During a time of potential crisis. They have jobs to do.

The last thing they need to be doing is setting aside their actual responsibilities in order to provide a photo-op for the President. Any President.

I am so tired of this show horse trying to be something he’s not.

What the h does he think he’s going to do? Tell the hurricane that he decreed that the sea levels would be going down this year?

What else does Obama have to do? The golf course would be closed with a storm coming. Otherwise, he would be stuck in the house with his wife, who would be carrying on about his diet. Or he would have to talk with his kids, who might want him to take care of oil leak again.

Funny how all of obama’s big, heroic efforts are on the backs of others that we don’t see or hear of and he seems to take the credit.

Adam Baldwin’s latest tweet sums up my feelings quite well: adamsbaldwin THIS! | RT @Borafil “The media was giving Obama a chance to be better than Bush on hurricanes.” ~ #Irene

[…] Jacobson manages to fault Obama both for being on vacation AND for cutting his vacation short: “He took charge? What exactly did he do in the fews hours after he rushed back from vacation […]

By the looks of that photo you would think they were performing some pretty major strategery with the subject being a world war or something…..

Can’t you people understand this was a strategy meeting? It’s purpose was to decide how to outwit this storm. Give the guy some credit. He tried his best and, like everything else he touches, it turned to dross. Make no mistake, this guy will use every tragedy, every disaster as an opportunity to beat his chest and proclaim himself a hero of the first order, way above everybody else. His fragile ego can accept nothing less. He has never stopped campaigning and will be in that mode until he is carried out the door kicking and screaming all the way.

“He did nothing, but he sure looked good doing it.”

Professor Jacobson! You have written the perfect slogan for the 2012 Obama run!

Better copyright it or they’ll run it and never give you credit!

The situation room… the vacation staged photos… the one above… Are there any photos in which Obama is doing the talking, leading a discussion, explaining anything, actually in possession of documentation, or uttering orders? He rarely looks like he’s in charge of anything…

Just noticed that the Obama campaign websites use those obnoxious flash cookies… http://www.informationweek.com/news/security/client/231500379 No wonder the FCC and courts won’t do anything. http://www.eweek.com/c/a/Security/Microsoft-Drops-Stealthy-Regenerating-Supercookies-from-MSN-218035/

My husband predicted Team Obama would attempt to gin up his numbers, by forcing comparisons between Irene and Katrina. In response, I surmised that this would backfire, as this reeks of bovine excrement. I am glad to see this is proceeding as I have foreseen.

[…] What a leader: This should be Obama’s Dukakis Tank moment, when pure bravado exposed the very perception of weakness the candidate hoped to overcome. […]