It’s nice to be needed

It’s nice to be needed

Thanks to frequent photographer Jason for this photo taken earlier this week in Greenville, NC: 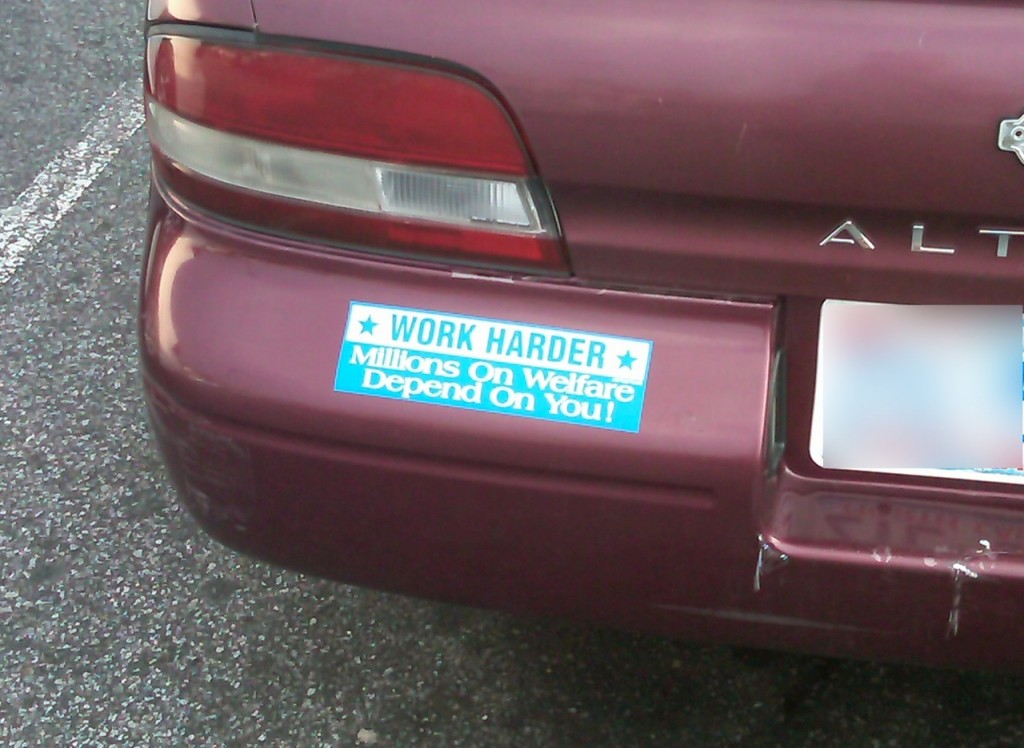 Show me a person is playing by the rules and trying to make it in this world, and I have absolutely no problem with my taxes helping them. Like most conservatives, I’m thrilled when I see my money going to a good and successful cause. There but for the grace of God …

Problem is, there are too many on welfare who deem it a way of life to which they are entitled.

The stubborn intergenerational cycle of poverty is not for lack of available opportunities in this great country. It is because of a poverty of values which lead to success. The recipe for moderate success is exceedingly simple and easy.

LukeHandCool (who thinks the only way to truly effect change on the horrible life-wasting values of our inner cities and break this cycle for good … is to institute a mandatory two-year stint in our armed forces. Tinkering with economic incentives and other bandaids will not work when dysfunction has reached this point).

Yeah, work harder! All those good for nothing Social Security recipients sucking at the government teat need their checks! And get your government hands off my Medicare while you’re at it! My grandma worked hard for that money, unlike all those lazy welfare people whose lifetime benefits are capped at five years thanks to the welfare reforms passed in the 1990s!

“…unlike all those lazy welfare people whose lifetime benefits are capped at five years thanks to the welfare reforms passed in the 1990s!”

I don’t know about you, but not working for five years would seem longer than a lifetime to me.

To be able to face my children, I wouldn’t be above leaving the house every morning to apply to every McDonalds around. If that failed, I’d go door to door looking for work mowing lawns. If that also failed, I’d be accosting you in your car, insisting you let me clean your windshield using a discarded newspaper as the rag. Then, after it was spotless, while dodging traffic, I’d insist you buy some of the fruit or flowers I offer.

LukeHandCool ( whose 10-year-old daughter and her friend made $22 in less than an hour selling lemonade and cookies. Come up with a good product and throw in some entertainment and you will succeed. I can’t remember who the journalist was, but a couple years ago he wrote of a homeless man who would sell his poems to motorist passing by. I knew exactly who he was talking about. He works on San Vicente Boulevard in Brentwood, holding a sign saying “Poems for sale.” I’ve pulled over and bought them a few times when I’ve had a couple dollars on me … lots of people pull over … I’m pretty sure he does pretty well … be positive and friendly and show you’re trying your best and most Americans will gladly help out).

A conservative in LA? I’m SHOCKED! I didn’t think there were any… well, since I moved.

Well, growing up here, I did grow up in a liberal Democratic household.

Funny thing is, my siblings and I never talked about politics growing up … then found as adults that we had all become conservative Republicans … all four of us without any of us mentioning our transition before we’d all switched over.

My older sister recently told me she secretly registered as a Republican when she became 18. Now that’s going a little too far, even for me. Shouldn’t we all go through some childish idealistic phase before becoming reality bitter clingers?