“Be a modern day Robin Hood” was the subject line of an e-mail received by reader redc1c4.

The body of the e-mail is below (red circle added).  It was hawking social work school, where one can specialize, among other things, in “welfare planning.”

The reaction from redc1c4 is that the e-mail reflects:

what’s wrong with this country in a nutshell … wtf? 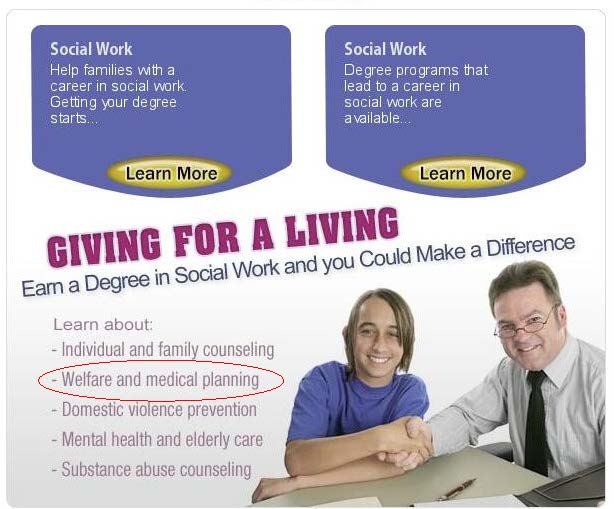 Added: I wonder if “welfare planning” includes planning to get off welfare?

I have two little sisters with degrees in social work. They talk about the satisfaction they get from helping crack addicted single mothers get on food stamps. They don’t think it is funny when I tell them that I’m glad they’re having fun with my money.

Seems as if the young man has the degree in social work and is counseling the out-of-work middle class insufficiently diverse and definitely not progressive working stiff who has been muscled out of the job market and maybe his house.

Or… the guy in the tie is the social worker and the kid is getting “substance abuse counseling”? These programs are largey inefficacious, and federal grants fund them. Ditto “domestic violence PREVENTION”. If you think that sounds good, and I’m a nasty one for being against this “worthy cause”, please consider that there is no way any social worker prevents domestic violence. (And apparently the VAWA doesn’t either: http://www.law.columbia.edu/null/download?&exclusive=filemgr.download&file_id=15677 ) Mental health counseling and treatment is another wasteful dump of taxpayer money, in multiple ways, such as grants to various organizations, Medicaid disability excesses, and Medicare and Medicaid waste.

I know this was a joke (and that part was funny), but in case someone reading is considering the field and seeking work:

There’s a lot of good social workers can do (I worked in an area of the field for some years), and one can maintain ethics in the process, but it is not a high-income or high-status field.

The degree isn’t necessary for all jobs if one wants to work for the State. In Texas, greatest demand at the moment is in direct client support (outpatient) for mental health consumers, and for families and children within the child protective services system (doing home visits, regular evaluation etc). There seem to always be openings in these areas.

Knock-knock-knock: “I’m from the government, and I’m here to help”? 🙂

good one…best 2 entry level positions I could find were Salt&Marlboro importer in NYC and Congressman.

I get emails like this all the time but I never thought of forwarding them.

My sister worked as a social worker for a state and had endless tales that were in many cases quite literally unbelievable.

She insisted that one welfare queen had listed the names of her daughters as Sy-PHI-lis and Go-NOR-rhea on one of her official documents.

I think I’d last about 15 minutes in most of the situations she recounted.

Welfare destroys lives and we have empirical proof of this after 50 years of the “War on Poverty.” Talk about quagmires…

Welfare planning includes teaching students to teach clients how to game the system.

A degree in Social Work (4 years ) has been available in Australia for 40 years . A start out position is to be based in a hospital . Social workers help the patient & family get back home & refer to follow up eg elderly in home care.

But it is the 4 year trained person at the top of the decision & planning level .They do triple majors & placement blocks.

The lower level intervention jobs are very difficult. It helps to be from that environment somewhat

If they’re trying to help society, why no coursework in climbing, posing for mag party pics, and what designer to wear where?

Ora -Don’t you ever help anyone?

I’ve given work, loans, clothing, food, hotels by the week, furniture, bicycles, rides, encouragement and any number of second, third and fourth chances to a number of homeless “underclass” individuals, most of whom had drinking, drugs, women by the hour, Lotto, and petty crime habits. Most have had criminal records, some were just in “down on their luck” situations which they truly thought incidental to their lifestyles. I’ve been stolen from, lied to, and most of those loans were never repaid.

That said, I wouldn’t have not tried for the world and I still am fond of most of these people, since out of my life. The system hasn’t been able to help them and their own families have given up. It’d be sadder had these men not wanted to work at all- they did seem to derive some genuine personal satisfaction from having done a day’s work to “help” someone else.

I’ve done the church thing and volunteer work in a few organizations. Please tell me what else you’d have me do. My comment was on the frustrating circular reinforcement of social work to social affliction: There will always be problems and dysfunction identified as coming under the purview of governmental programs and orgs as long as we have the credentialed profession of social worker, esp. in government bureaucracy. Jobs need a “market.”

Gov could more efficiently provide basic food, housing and nominal stipends were it to refer “other life needs” people to non-profit, charitable or privatized resource centers. Anyway, my idea isn’t so far off– why NOT teach mothers on public assistance how to get the father of her children to marry her and help raise the kids, money and love-wise??????????????????????????

Premature submission needs a pharma– Since I stand by this sentence and sentiment, allow me to get it right

I’ve seen welfare programs that look to get people back on their feet. But they are rare. Keene, NH had a program like this for a while: http://www.kha.org/housing/mtw.html

The person I knew that worked on this program said it was hard work, but fulfilling when the participant really wanted to improve their lives. But they also had many people just hang up when they called about housing and were told it was a welfare-to-work program.

Added: I wonder if “welfare planning” includes planning to get off welfare?——–Wash your mouth out with soap!

It seems like many (most) social workers start out as idealistic people who want to help and end up burned-out and bitter. There’s something sad and wrong about that.