Clarence Thomas on verge of victory

Clarence Thomas on verge of victory

That’s a theme in a very worthwhile article about Thomas written by Jeffrey Toobin in The New Yorker:

These tempests obscure a larger truth about Thomas: that this year has also  been, for him, a moment of triumph. In several of the most important areas of  constitutional law, Thomas has emerged as an intellectual leader of the Supreme  Court. Since the arrival of Chief Justice John G. Roberts, Jr., in 2005, and  Justice Samuel A. Alito, Jr., in 2006, the Court has moved to the right when it  comes to the free-speech rights of corporations, the rights of gun owners, and,  potentially, the powers of the federal government; in each of these areas, the  majority has followed where Thomas has been leading for a decade or more. Rarely  has a Supreme Court Justice enjoyed such broad or significant vindication….

The implications of Thomas’s leadership for the Court, and for the country, are  profound. Thomas is probably the most conservative Justice to serve on the Court  since the nineteen-thirties. More than virtually any of his colleagues, he has a  fully wrought judicial philosophy that, if realized, would transform much of  American government and society. Thomas’s views both reflect and inspire the Tea  Party movement, which his wife has helped lead almost since its inception. The  Tea Party is a diffuse operation, and it can be difficult to pin down its stand  on any given issue. Still, the Tea Party is unusual among American political  movements in its commitment to a specific view of the Constitution—one that  accords, with great precision, with Thomas’s own approach. For decades, various  branches of the conservative movement have called for a reduction in the size of  the federal government, but for the Tea Party, and for Thomas, small government  is a constitutional command.

If Toobin’s revionist take is correct, (and I defer to his knowledge of the direction of modern constitutional thought) it means that liberal America has spent a generation mocking a Black man as an ignorant fool, even as constitutional scholars stand in growing amazement at the intellectual audacity, philosophical coherence and historical reflection embedded in his judicial work.

Thomas always has stood as a mortal threat to liberal dogma enforcers not because of the content of his character, but because of the color of his skin.  It is not surprising that he has been subjected to a level of attack not seen on a Supreme Court Justice in a generation. 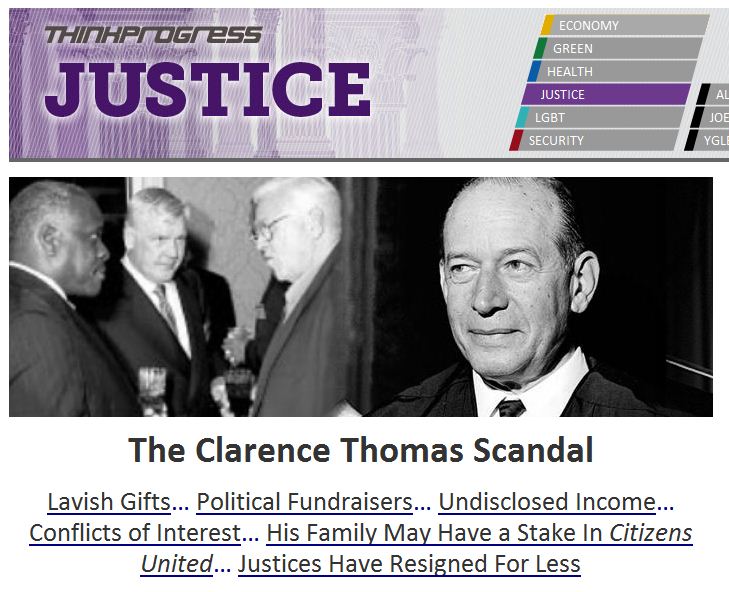 Thomas just keeps on keeping on, staying true to his intellectual foundations and refusing to be bullied.

And after almost two decades on the Supreme Court, he is on the verge of victory, for himself and for us.

Obama on Clarence Thomas
“…THE WALL STREET JOURNAL ^ | August 18, 2008 | Editors
Mr. Obama took a lower road, replying first that “that’s a good one,” and then adding that “I would not have nominated Clarence Thomas. I don’t think that he, I don’t think that he was a strong enough jurist or legal thinker at the time for that elevation. Setting aside the fact that I profoundly disagree with his interpretation of a lot of the Constitution.” The Democrat added that he also wouldn’t have appointed Antonin Scalia, and perhaps not John Roberts, though he assured the audience that at least they were smart enough for the job.

So let’s see. By the time he was nominated, Clarence Thomas had worked in the Missouri Attorney General’s office, served as an Assistant Secretary of Education, run the Equal Employment Opportunity Commission and sat for a year on the D.C. Circuit Court of Appeals, the nation’s second most prominent court. Since his “elevation” to the High Court in 1991, he has also shown himself to be a principled and scholarly jurist.

Meanwhile, as he bids to be America’s Commander-in-Chief, Mr. Obama isn’t yet four years out of the Illinois state Senate, has never held a hearing of note of his U.S. Senate subcommittee, and had an unremarkable record as both a “community organizer” and law school lecturer. Justice Thomas’s judicial credentials compare favorably to Mr. Obama’s Presidential résumé by any measure. And when it comes to rising from difficult circumstances, Justice Thomas’s rural Georgian upbringing makes Mr. Obama’s story look like easy street…”
You are right, professor,Justice Thomas has the content of character that Martin Luther King wrote about, the color of his skin is irrelevant. Where is Anita Hill these days? Has she or Obama repented of their disrespect toward Justice Thomas?

“Where is Anita Hill these days?”

From what I’ve read lately, Anita Hill is a liberal/Dem activist, and was at a fund raiser or other meeting on Martha’s Vineyard while the Obamas were on vacay. (I don’t have a link on where I read that, but will update if I find it.)

Also, she is briefly pictured in a documentary made back in 2006 called Indoctrinate U as a noted leftist.

She tried, but failed, to take down Justice Thomas. And today, we have to be thankful for that failure. It is our victory, to our nation’s benefit.

Here is a link about being at Martha’s Vineyard:

As to what she’s doing now, here is news….I just googled it:

I read lots of articles and essays that are enlightening and interesting, but few that I would characterize as “must read”. In fact, probably the last essay I read that I would classify as “must read” was Angelo Codevilla’s essay published over a year ago in the American Spectator titled “America’s Ruling Class”. And before that, it was Charles Krauthammer’s 2009 speech given at the Manhattan Institute titled, “Decline is a Choice”. So I’d estimate I run across a “must read” about once or twice a year, on average.

But these two taken together, Toobin’s New Yorker piece which inspired Walter Russell Mead’s essay, are “must reads”.

Thanks to Aggie95 for bringing them to your attention and to you for commenting on them.

WRM has become one of my daily reads who I agree with about 90% of the time. Which is odd since his Wiki entry indicates he is a lifelong Democrat – and I vehemently oppose nearly everything Democrats hold dear.

Rush is on now saying that this article is designed to alert Libs to step up their fight against Thomas.

Joy, you, and Rush, hit it right on the head. While reading Toobin’s article, and thank Professor for the link, the extensive detail regarding Ginny Thomas’ activities led me to the same conclusion. Toobin has decided Thomas must recuse himself regarding Obamacare consideration, and he has pointed out, in his mind, several reasons why that must happen.

When the case is argued next year, the MSM and all the Libs will be pressing for recusal and Toobin’s “proof” will be used constantly. There is no doubt about it!!!

And what about Kagan recusing herself regarding Obamacare?

The good Professor has already addressed this…

They really need to add a “like” button!!! Perfect reference. 😉

Ahhhh, now that is truly the relevant question. She of all people must recuse herself. However, as usual, Republicans are not organized and thinking ahead.

They will be on defense, without any media attack dogs on their side going after the true, blatant conflict(s) Kagan has. There are known emails which indicate she made comments, and contributed to strategy, regarding ObamaCare; because of this, she actually may have perjured herself during her confirmation hearings, but the Dem Senate won’t pursue that possibility, of course.

Time for Republicans to go on offense. And prepare: collect a HUGE pile of evidence negating the assertions, to effectively neuter the left when they do try to attack.

We can only hope they’ll be well prepared, but I’m not counting on it.

Is anyone else seeing the subliminal message “uppity” in Think Progress’s hit-piece?

I can see why the Liberals think Thomas is an intellectual dud. When he writes an opinion for the court, he tends to use down to earth language. With Antonin Scalia, the intelligence practically crackles off the page (as does the sarcasm. He’s a man after my own heart!). But with Thomas, you have to read the sentences in the order they are written and then think about them. His reasoning tends to be grounded in common sense, rather than high legal theory. He works in straight lines and (relatively) simple words.

It takes a very smart person to do what Thomas does (and he makes it look natural) but it’s exactly the opposite of the showy, self-important braying that Liberals prefer. God bless the man.