A headline only a Krugman could love

A headline only a Krugman could love

There is no evidence he wrote this headline, but he could have: 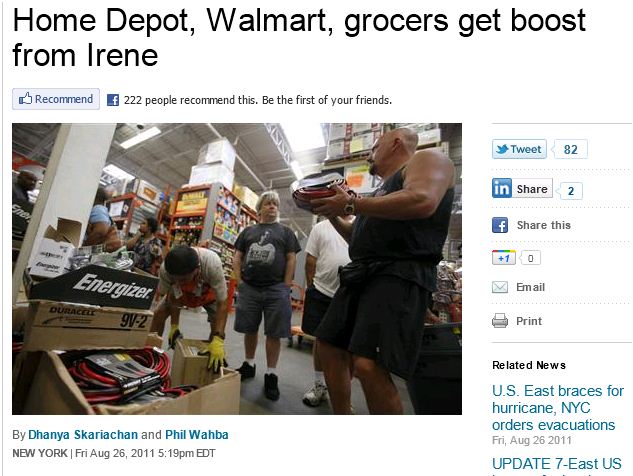 How dare they sell stuff that people want at a price they are willing to pay?

When I look at Obama and Krugman … nowadays if you tell me someone won a Nobel … if it isn’t in the hard sciences … it counts against their reputation.

Fun fact, the “Nobel Prize in Economics” isn’t even a real Nobel Prize, it was established some 70 years after Alfred Nobel’s will created the Nobel Prizes. Another fun fact, prize is a really weird looking word when you think about it.

Unless it is capitalism that succeeds. Then make it “crazy people” “panicking” about a hyped up hurricane.

Krugman could have written that headline because he is proof that one can win a Nobel prize in economics without ever reading or becoming familiar with Frederic Bastiat’s broken window story. Of course, one wouldn’t need to read Bastiat since the story is also told in Hazlitt’s Economics in One Lesson.

Well he’s got the “Nobel.” Let’s nominate Krugman for a Pulitzer in the Best Unintended Self-Parody category.

What else is new? Every time there is a big storm or other catastrophe all the grocery stores sell out of pretty much everything. Same for home improvement. It’s called fear you might not be able to eat for some time and/or regret you didn’t put plywood on your windows syndrome. My question is why the media thinks something like this is news. And why do they think that someone’s sworn enemy’s diatribe against said person is news worthy of any ink. That goes double for asking a Hollywood nut about world affairs and printing that opinion like it is gold.

Krugman is an idiot and has come out with more ridiculous opinions than this.

What was that hooha about in reporting Irene? This was a category 1 storm. Big, yes. Three deaths in NC. A tragedy for sure but one man died when a huge limb fell on him outside his house. What was he doing outside his house in a storm like that? A child was killed in a traffic accident because the traffic lights were out. Again, what was a child doing out in a storm like that and why wasn’t more caution used. The other death was unknown the last I saw about it. I live about 20 miles west of Charlotte and it got a very little windy with no rain but plenty of sunshine. Why all the hoopla about this thing? What were they trying to destract us from? Or was this an opportunity for Mr. Wonderful to beat his chest and show the peasants how great he is? To show he didn’t messup like Bush did in Katrina which, of course, makes him a better man. I saw where Ray Nagin was telling listeners on MSNBC what to do in a hurricane. This is akin to drafting a pack of foxes to look for some missing hens.

Former columnist John Tierney would not see such a headline as an indictment of WalMart, but of its success.

“This was the only place we could find water those first days,” said Rashan Smith, who was shopping with her three children at Wal-Mart on Saturday. “I still haven’t managed to get through to FEMA. It’s hard to say, but you get more justice at Wal-Mart.”

Shame Tierney’s no longer a columnist. Quality is not Job 1 at the New York Times.

The real tragedy is that the Keynesians like Krugman and Obama is that they really think that being inefficient helps the economy as does wasting resources (e.g. cash for klunkers). Most of the press corps is so economically ignorant they don’t know enough to even question this view.