Not the bumper sticker, you know what. 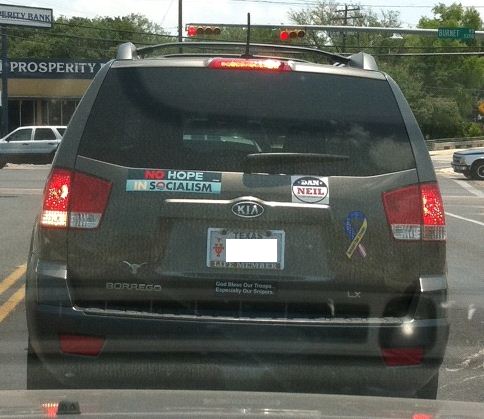 Guess even the liberals of the San Francisco of the Southwest (Austin) understand that their electric bills are necessarily skyrocketing.

Gee, and I thought it was the UT tag on the car.

I moved to Austin from DC, so I have seen my fair share of liberal bumper stickers. The other day, however, in Austin, I saw a kid about my age (22) with an “Obama-Biden” sticker right next to a bumper sticker that read “Fart Proudly”. Maturity about what I would expect from someone in my generation…

Remember, if the stickers are liberal, don’t snap that picture until you can read the “Objects in mirror are closer and perhaps more conservative than they appear” warning in the target’s mirror.

LukeHandCool (who gives extra credit if a green traffic light shows in the picture … photoshopped or not).

“Fart Proudly” is attributed to Ben Franklin, albeit in a dream, in a book of essays by and on Franklin by that name.

“It is a small gesture, but one that can be very effective – especially in a large crowd. So fart, and if you must, fart often. But always fart without apology.

“Fart for freedom, fart for liberty – and fart proudly”

So I would say that the person sporting the bumper sticker has a liberal (Classical liberal or libertarian if you prefer) streak in them.

I would also say that it is very appropriate these days.

BTW: I am a liberal. Most would qualify that as (Classical liberal, libertarian, minarchist or some such. I agree with Hayek and Friedman that we need to take the word back.

I supported Obama in 08. Not enough to put up any bumper stickers or vote for him (or McCain) and certainly not enough to give him any money.

I supported him in expectation that he would turn out pretty much the way he has. I am 62 and have seen the country gradually going to Hell. Under a McCain or a Clinton or pretty much anyone else, we would have just kept going down that path. Maybe slower, maybe faster but the same direction.

We needed someone to turn on the steam. Would we have gotten the Tea Party movement without Obama? Would we be having this discussion about raising the debt ceiling without Obama or would it have been automatic?

Obama has lit a fire under a bunch of butts. We needed that. Sometimes worse really is better, to paraphrase Lenin.

“Under a McCain or a Clinton or pretty much anyone else, we would have just kept going down that path.”

I hate to admit it, but I think you are right. A President McCain would not have given us ObamaCare, but almost certainly we would have had an unconditional amnesty for illegal aliens. McCain was always lukewarm towards tax cuts, so perhaps he would have scaled back (or eliminated) the Bush tax cuts. And Democrats likely would have gained huge majorities in both houses of Congress in 2010 – perhaps holding 70% or more of all seats.

I used to live in the Peoples Democratic Republic of Austin. An infamous bumper sticker that was popular at the time I was there was the one that read “No Vacancy”, and it summed up perfectly the progressive mindset of the city. All narrow-minded communities hate outsiders, but only in Austin did they advertise it proudly on a bumper sticker.

Sticker under the plate says:

Bet that drives the nuts in Austin batsh*t crazy.

That “God Bless our Troops, Especially our Snipers” bumper sticker is produced by LaRue Tactical, which makes sniper gear. LaRue located in Leander, TX, which is pretty much a suburb of Austin. It may drive the nuts in Austin crazy, but I’m sure the rest of them share the sentiment.

Hell, a lot share the sentiment here in Moscow on the Willamette, aka the People’s Republic of Eugene, which is in one of the bluest counties in Oregon. I’ve got the same bumper sticker on my Yukon. You’d be surprised at the number of positive comments I get. Heh!

Thanks for deciphering that sticker!! It was too blurry and I’d given up.