How do you square this with “original intent”?

How do you square this with “original intent”?

Spotted by reader Bob in Mountlake Terrace, WA.  If the drafters of the Bill of Rights had known, they would have worded the 1st Amendment to read as follows:

“Congress shall make no law respecting an establishment of religion, or prohibiting the free exercise thereof; or abridging the freedom of speech [fn], or of the press; or the right of the people peaceably to assemble, and to petition the government for a redress of grievances.

Warning:  Enlarge at your own risk. 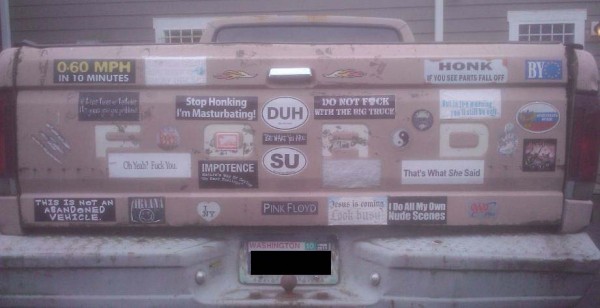 This guy is a walking ‘head case’. I don’t even think Dr. Phil could help. 🙂

Like a few. Shake my head at others. Still, if the guy wanted to be left alone, he couldn’t have chosen better.

Looks like someone just opened a new lead on D.B. Cooper’s whereabouts

Seems like the messages are directed at him who is one, but doesn’t have one.

Would it be vandalism or a free speech issue to spray that goo gone stuff over his tailgate.

Hm…. still not as bad as the subaru I was was behind yesterday… basically, anything that could be interpreted as “I am superior, you are an idiot who lives in flyover country” was there. WISH I’d had my camera!

If I was the owner of that truck, I would definitely not drive thru the state of Tennessee in light of their new law concerning bumper stickers that offend.

Looks like he needs the bumper stickers to hold the tailgate on.

OTOH, he has a Churchill quote, so he’s had some education outside of public schools…