How about he gives us his plan today?

How about he gives us his plan today?

Maybe he should stop issuing demands.  That would help.

How about he gives us his plan today?  Via Politico: 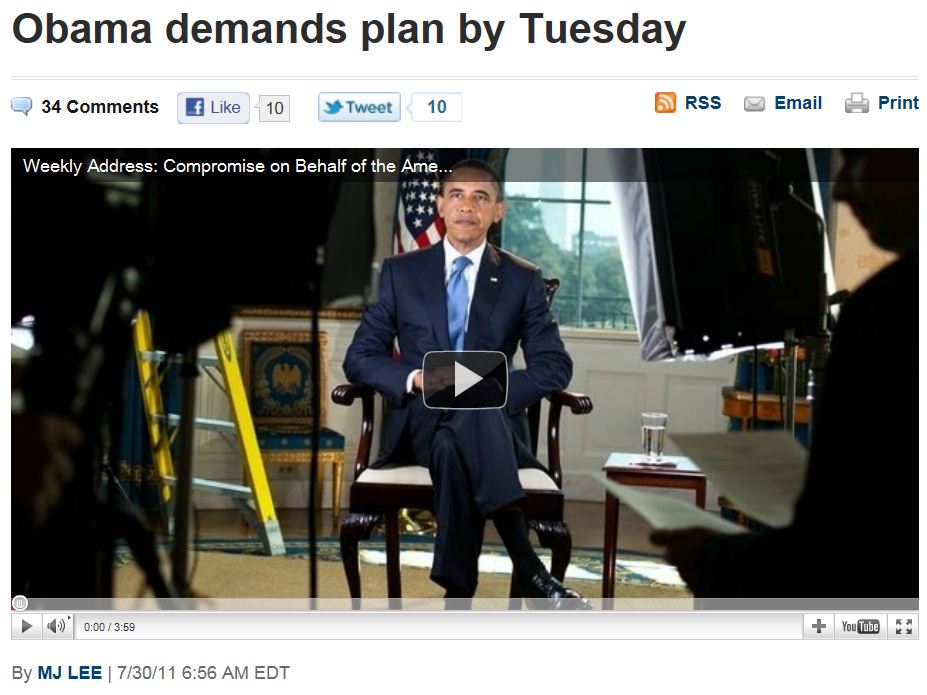 End This Crisis
by John Boehner

At moments like this, the arrogance of Washington is most evident not in its actions, but in its inaction.

“These are challenging days for our country and its people.

The U.S. House of Representatives has now sent to the Senate not one, but two bills that would bring the crisis to an immediate end.

Reflecting the will of the people, both bills passed by the House would cut trillions of dollars in spending, advance the cause of a constitutional amendment requiring the federal government to balance its budget, and impose caps on future spending to stop the expansion of government while we give our economy a chance to grow and create jobs.

Both bills also raise the debt ceiling for President Obama past the end of this year, averting the possibility of a damaging national default.

At moments like this, the arrogance of Washington is most evident not in its actions, but in its inaction.

In the face of a debt explosion that threatens the future of our country, the Senate has not passed a budget in more than 800 days. The House passed a historic one in April.

In the face of a government shutdown this past spring, the Senate produced no solution and initiated no bill. The House did.

And to date, faced with the possibility of a national default that could destabilize our already shaky economy, the Senate has sent the House nothing, while the new majority in the House has acted twice.

The House demonstrated not arrogance, but leadership last week when a bipartisan majority — including many who came to Washington opposed to raising the debt ceiling under any circumstance — passed the Cut, Cap, & Balance Act for the greater good.

The House demonstrated not arrogance, but leadership today by passing the Budget Control Act, bowing not just to the will of the American people and their desire for a timely and responsible end to this crisis, but also to the Constitution, which gave us the reality of a bicameral legislature.

The legislation passed by the House this evening is not perfect, but it is a positive step forward in the effort to cut spending, clamp down on the growth of government, and reduce our debt.

The bill was constructed on a commonsense framework that was pre-negotiated last weekend with the bipartisan leadership of the Senate, in an honest and sincere effort to bring the crisis to an end. Unfortunately, Senate Democrats walked away from that framework over the course of this week.

Senate Majority Leader Harry Reid is a good man. His character is not in question. But the fate of this legislation, and possibly our economy, hinges on his ability to reason with the president, and with his caucus.

The people’s House has spoken — not once, but twice — presenting the other chamber with legislation certified by the nonpartisan Congressional Budget Office as cutting trillions of dollars in spending over the next decade while providing an immediate increase in the national debt limit.

In contrast, in the six months since President Obama formally requested that the debt ceiling be raised, the Senate has passed nothing.

Time is now of the essence. The quickest way for Congress to eliminate the possibility of default and ease the growing turmoil in our economy is for the Senate to take up the House-passed bill and send it to the president today. As Senate Democrats themselves noted today, a House bill that has been sent to the Senate and then tabled is “still pending” — meaning it can be taken up and passed at any time.

Both parties have been entrusted with power in Congress. Neither party has been authorized to take risks with the full faith and credit of the United States.

For the sake of our country, and the sake of our economy, the House has passed a responsible bill that can pass the Senate. Now it’s time for our colleagues in the Senate to pass it, send it to the president, and bring this crisis to an end.”

— John Boehner is speaker of the House.
NRO

Harry Reid and the President have just been boxed into a political corner by John Boehner and the House Republicans.

It appears that they simply misjudged who they were attempting to bully, or they just never figured out the proper order of battle under the slightly changed circumstances — i.e., owing to the existence of the deadline — and as a result they are now scrambling for traction.

For his part, the President is actually attacking the House for wasting time legislating. Think about the absurdity of that!

The fact is, time is short and Harry has to act quickly — he can’t get away with just tabling measures that the House sends over. And the President can’t just demand a solution to his liking without ever putting on the table what his plan was, or is.

Only Boehner and the House Republicans seem to have appreciated that political reality, and they rose to the occasion by acting — twice. So, they can say Harry and the President actually have a choice.

The bottom line is that the Senate has been sent two resolutions to the problem, and the constitutional process is that they either have to take one or the other up by passing one, or by amending and sending one back to the House for further action.

There are no other choices.

Reid and the President wrongly assumed that Boehner would pass his bill only as a “face-saving” measure, and that he would eventually then pass a new and “clean” bill.

But that is not the way our system of government is intended to work, and John Boehner can now say, “Sorry fellas . . . but the ball is in your court. Man up, Harry! Take up what we sent you.”

If they do not, Harry Reid and Barack Obama will 100% own any ensuing financial disruption.

Even some Republicans are stupidly criticizing Boehner and implying that passing the bill was dumb.

You’re right, of course, except that, for many of us, it was imperative that the bill sent Reid be strong before any ensuing wrangling with the Dems, and also that it be not merely proof of the GOP’s intent to tackle our deficit and debt debacle but a banner to be waved in the upcoming election season. While not near ideal, 3.0 was brawnier than its predecessor, thanks to House Tea Party members and a Boehner who yielded and did the right and, I think, the politically astute thing for the important campaign ahead.

Obama may be the perfect combination of arrogance, incompetence, stupidity and narcissism.

It took Washington, Madison, Mason, Adams, and Jefferson to create our Republic but Obama may be able to destroy it on his own…

I can’t stand even looking at him any more; it makes me start to gag. I particularly couldn’t stand how he misrepresented the “get your house in order” comment. (By the way, he looks tired, and looked a little nerved up at the beginning of that video.)

Here’s how much in denial Harry Reid still remains . . . from the Washington Post story:

“Unless there is a compromise or they accept my bill, we’re headed for economic disaster,” Reid said.

Gee. why do I believe that Harry is bluffing?

Perhaps because at this point, the only political room Reid has left is to either pass one of the two House measures, or to amend one or the other of them, and send it back.

The House is NEVER going to pass a compromise bill first! The ball is in Harry’s court, and if he does nothing, then any ensuing fiscal crisis is his fault, as well as the fault of the President for his failure of leadership, including the fact that he had no plan!

So that’s it. The House should not budge from that position because it is now a political lock and the clock is ticking.

But hey, they wanted to be Senators, so sometimes you have to do some heavy lifting!

And, if it is amended, once it goes back to the House who is to say they won’t put it right back in, perhaps along with some additional language, huh?

This is our wonderful constitutional process at work, folks.

Isn’t it a beautiful thing?

And because of the potential far-reaching consequences of this measure, one is almost tempted to characterize it in some catchy way.

default’s coming…
what happens to the economy
…..and then to the democrats and 0bama afterwards in 2012
when they lose massively to conservatives

*LOL*
Either have the Senate Dems pass the cut cap and balance or the other boehner bill. or we default …and if we default it’s on harry reid, the Democrats, and 0bama: they will be held accountable when the economy goes to hell.

[…] addict or not, Obama does not want to have that discussion. That is the Barack Obama plan so many can’t seem to find. Stop looking for the plan, reelection is the plan. Sauron Obama will agree to just about anything […]