Thanks to reader Randy who writes:

No doubt where this guy stands. Just spotted in the Herndon/Reston area of northern VA, just outside a medical facility. 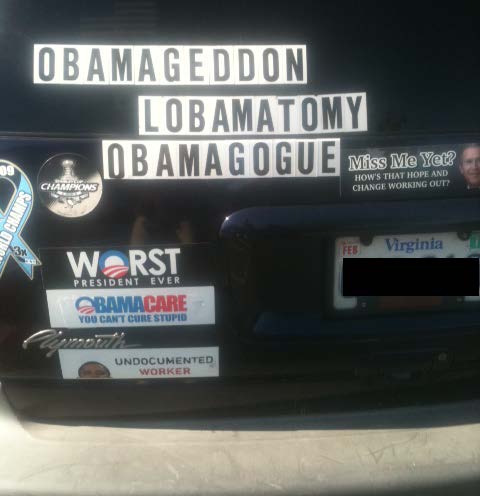 OT prediction: obama actually does have a financial plan. it will be over 2000 pages. he will unvail it and push a vote without people having adequate time to read said plan.

I hope that wasn’t a mental institution.

LOL. That made me smile.

“NASA satellite data from the years 2000 through 2011 show the Earth’s atmosphere is allowing far more heat to be released into space than alarmist computer models have predicted, reports a new study in the peer-reviewed science journal Remote Sensing. The study indicates far less future global warming will occur than United Nations computer models have predicted, and supports prior studies indicating increases in atmospheric carbon dioxide trap far less heat than alarmists have claimed.

Refudiation yes unfortunately the highly-educated Dr Krauthammer is fear-mongering the warning that if we do not give Obama what he wants then Obama will be re-elected.

Despite the fact that ‘The Polls’ indicate otherwise.

DEMOCRATS FOR BARACK
ING AMERICA’S BACK

Hehe…I saw a similar car here in WNY the other day…and gave the driver a big smile and a thumbs up.