You probably paid for this, one way or another. 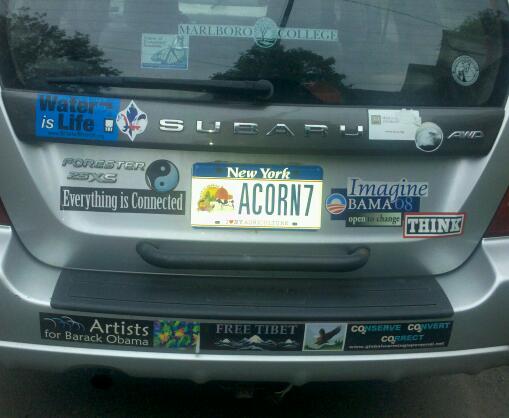 From the college’s site: “Marlboro College offers a student-centered approach to education that is structurally and culturally different from other colleges. Unfettered by generic course requirements, each student works with their faculty advisor to choose an individualized course of study.”

I’d be willing to bet that this person feels that the difference between choice and murder is about 9 months, too…

“I’d be willing to bet that this person feels that the difference between choice and murder is about 9 months, too…”

A variation on your line would make a GREAT bumper sticker.

Free Tibet eh? The One did not. Nor will he.

“Free Tibet” – and I don’t mean one of those ‘buy one get one free’ deals, either.

I’m always amused that the same people that think ‘China is Awesome!’ and want Obama to have dictatorial powers, at least for a day, to enact his agenda by bypassing Congress, sport ‘free Tibet’ bumper stickers.

I’d bet most of the people that have ‘free Tibet’ stickers also possess a Che T-shirt.

I dated a Chinese woman in grad school, she grew up in Beijing during the Cultural Revolution. We had a huge argument once over Tibet – apparently schools in China teach that Tibet has continuously been a part of China for over 2000 years. The notion that Tibet had ever been independent had never occured to her. Being told that China had invaded and conquered Tibet sent her into a rage. Being confronted with proof, Western Histories of the event and news stories about it, made no impact on her position at all.

How dare this concerned citizen drive a gas-guzzling AWD SUV from a company that isn’t even unionized! I hereby move his or her Whole Foods membership card be stripped, his Democrat voting cards be terminated, and let him be thrown into the Outer Darkness with such other vile polluters like Exon and Enron where he shall never again see the glorious light of Saint Al’s face.

Free Tibet! (with purchase of another Tibet of same or larger size. Limit one per customer, no credit cards please.)