Rachel Maddow is the superstar of the MSNBC stable and hero of the liberal Democratic base, called the smartest and best talk show host on television..

So what did she do Friday night in the segment about the Palin e-mails?  She highlighted an e-mail sent to Palin by someone else to which Palin did not respond, using the phrase “bring beef, tequila and condoms,” and kept that phrase the screen for the entire 11 minute segment.

Real mature Rachel, but then again, you are on MSNBC:

I pity David Corn of Mother Jones, who wanted to ride the Palin e-mails to stardom, but who has been reduced to appearing on Maddow with the phrase “bring beef, tequila and condoms” plastered under his image: 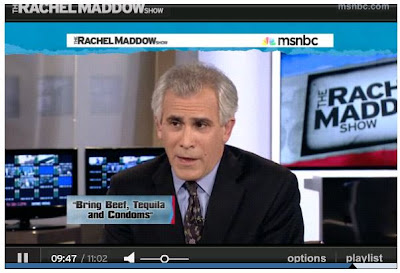 ——————————————–
Related Posts:
Headline AP Refuses To Write: “Sarah Palin Stood Up For Good Gov’t In E-mail”
Behold The Mainstream Media Eating Its Own Anti-Palin Bile – A Running List of Headlines

Ahh yes, Rachel. Were that directed at her, it would read..

NO! No pity for the evil doers.

LukeHandCool (who valiently tried to watch the video, but who finds Rachel's self-satisfied tone too annoying … and, who imagines that journolists couldn't get through a dozen of his emails without finding something salacious, like, "Honey … I'm too tired to stop by the supermarket on my way home!" and turn it into something flippinunbelievable).

This is classic Maddow, and is why MSLSD is such a laughing stock, along with "thrill up my leg" Matthews and disgraced, disavowed and disposed of Olberman. It's all about using something that shows up in the dump to try to paint the person into a corner. The fact that the person in question DIDN'T WRITE IT doesn't matter to them.

It's like all Liberals (with a deep, gravelly and grave delivery): "It's not the nature of the evidence; it's the seriousness of the charge."

That is so classless. Because the statement cannot be attributed directly to Palin herself, they leave it on the screen while talking about Palin, hoping that someone will hear what Maddow is talking about, and will unconsciously associate the statement with Palin. They think they are going to be able to pull off some MKUltra on people through the news agencies, and it might work for some people. When people who are not being paid to watch NBC realize what it is that they are doing are likely to be very turned off by these clumsy attempts at implanting ideas. They aren't even trying to make an actual point with this. Any leftist thrall trying to associate this statement with Palin at a later time is going to run headlong into the reality that they where manipulated. Anyway, times are tough for the leftists. We almost have the kitty scoop directly under them, and a trip to the trashcan is well underway.

Rachel 'The Snarl' Maddow is the 'superstar' of MSDNC?
Has anyone seen her latest ratings? Tied for dead last.

Gee, maybe Rachel Maddow should have waited a bit to pick up on the emerging European view.

For example, she could have posted the headline from Tony Harnden's blog for the Daily Telegraph:

And then her viewers could have furiously fired up their laptops to read the piece, beginning as follows:

"The trove of more than 13,000 emails detailing almost every aspect of Sarah Palin’s governorship of Alaska, released late on Friday, paints a picture of her as an idealistic, conscientious, humorous and humane woman slightly bemused by the world of politics.

One can only assume that the Left-leaning editors who dispatched teams of reporters to remote Juneau, the Alaskan capital, to pore over the emails in the hope of digging up a scandal are now viewing the result as a rather poor return on their considerable investment.
. . . ."

Sometimes you just need to be a lttle more patient.

Has anybody in the GOP leadership spoken out against this unprecedented media dumpster diving?
Did I miss it or is the GOP establishment in fact watching silently on the sidelines as this goes on?
Have any of the "serious candidates" offered any "serious thoughts" on this media overreach?
If Palin runs, it looks like she will be running against the WH, against the Dems, against the media, and against her own party. No wonder she hasn't made up her mind yet.

@John: they leave it on the screen while talking about Palin, hoping that someone will hear what Maddow is talking about, and will unconsciously associate the statement with Palin.

Most of the Democrats in my circle of acquaintances fall for this sort of thing every time.

If the media wants to be treated with respect, they are picking a darned funny way of going about it.