O kay, we get the point

O kay, we get the point 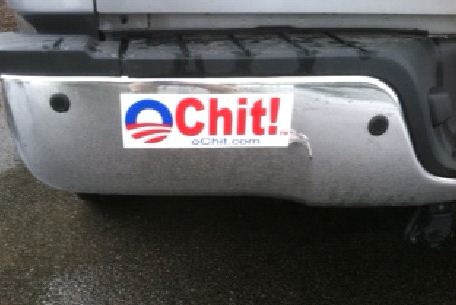 I should keep my camera with me, at least in the car, because I saw a KERRY/EDWARDS bs in Wegman’s parking lot the other day.

Kitty, you don’t need to carry a camera. I took this pic with my iPhone (a blackberry) phone will work, too.

Heh heh heh. That’s a good one. And @jakee called it. But I do believe there are a LOT of people who feel that way, Hispanics in particular. They were the target of the hard sell, and most are good Catholics who want to make money to support families, prosper and thrive here. But they believed the lies. Whether legal or not, there a many Hispanics who regret that vote for this Obamanation.

Vote buying also explains the recent Exec Order for amnesty (or close to it). More trying to shore up the Hispanic vote. Leftist Democrats are the epitome of raaaaacists. Divisive. Partisan. Marxist. Raaaaacist. Did I miss anything?

Jakee308, whip out the old tried and true baseless ‘race card’ accusation Typically shuts the accuser up, doesn’t it? Why don’t you try to justify your baseless accusation here? I’m all ears! Let the readership be the judge of your worn-old, trite “just cause I said so” irrationale.

People pulling the race card normally go on for several lines blathering like the idiots they are with little to say.

Believe it or not, I’m actually seeing pro-Obama bumper stickers when I go out. Amazing.

I thought just an exclamatory word would suffice to indicate that I was attempting to point out that that would be the exact thought of some who find the race card in every hand.

Glad to see you’re fired up about that sort of B.S.

Guess you found one word snark inadequate to the job at hand. Try again, if you dare, monosyllabist.

Inadequate for you. Try some thought and patience next time. Remember what happened to your namesake.