Kloppenburg Had No There There

Kloppenburg Had No There There

Despite weeks of her campaign suggesting that “ballot bag security” issues tainted the election, JoAnne Kloppenburg decided not to pursue a court challenge.

As described here many times, the ballot bag security issue never raised any serious concerns about either election fraud or mishandling of ballots.  Kloppenburg also raised other “anomalies,” such as votes changing in almost every district, but again, there never was any evidence of anything other than the routine sorts of small errors which can take place in any election.  Indeed, the reason there is a recount process is because a recount may result in small changes in vote totals, although never on the 7000+ vote scale Kloppenburg would have needed to win.

In lieu of a court challenge, Kloppenburg promised a detailed letter to the Wisconsin Government Accountability Board, setting forth the problems and solutions.

The letter Kloppenburg sent, however, simply listed issues, such as better ballot bags and better training, which hardly were unexpected or novel.

Most important, Kloppenburg admitted in her letter that there was no evidence of fraud:

It is important to note that in the minutes there is scant evidence of voter fraud, namely individuals trying to fraudulently cast a vote. However, there is ample evidence of the opportunity for malfeasance or mistakes in tabulating or reporting the election results, due to the lack of consistency and compliance with elections processes.

Kloppenburg submitted a chart with the letter which purported to document the vote changes as a result of anomalies, including ballot bag security issues:

My campaign has reviewed the thousands of pages of minutes generated by the recount. Attached to this letter is a chart that summarizes the nature and the scope of some of the irregularities, anomalies and mistakes that the recount process uncovered and the minutes reveal. To the extent that in some counties the minutes do not address the kinds of irregularities identified in this table, or that in other counties observers were not able to see the ballots being counted by machine, this table reflects the very minimum occurrence of issues that compromise the integrity of the way in which votes are counted across the state.

Here is the chart. It shows a total of 1060 votes statewide which were changed (it is unclear in whose favor) when the anomalies (including ballot bag security issues) were addressed: 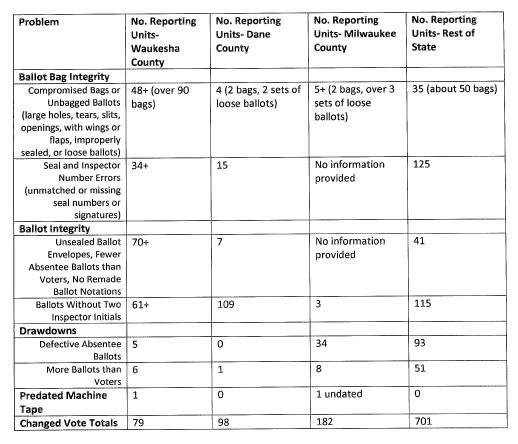 Despite spending hundreds of thousands of dollars of taxpayer money on a recount which had no possibility of changing the result, and despite spending weeks having her campaign cast aspersions on various election officials, the Prosser campaign, and the election process, Kloppenburg had nothing to show for it.

JoAnne Kloppenburg could have been gracious in her concession.  Instead, she sought to diminish David Prosser’s win, and failed to come to grips with the fact that there was no there there.

I tried to watch the full video, but it reminded me too much of listening to Mrs. Adams, my third grade teacher.

Why couldn't she just have said that the totals didn't materially change but that processes and procedures need to be tightened up for to ensure integrity in future elections. Droning on and on about situations in which procedure wasn't followed adds absolutely nothing to the debate.

At this point Kloppenburg HAS to attempt to diminish Prosser's win. It sets up the narrative in the near future for when the Union changes get to the Wisconsin Supreme Court.

That narrative will be that "Prosser is a illegitimate Justice, and because of the taint of his presence on the court even after so many irregularities were found, any decision coming from the Supreme Court that supports Gov. Walker must be opposed by the public."

It's a (sad) attempt to set up the political struggle in order to first generate turnout for any upcoming recall elections, and then to set up turnout for the 2012 election cycle, where the Liberal-Statists are hoping and praying they can get enough votes to retake the government and undo this legislation before it completely chokes off their Union support.

The taxpayers of Wisconsin should sue her for the costs of the recounts.

"Despite spending hundreds of thousands of dollars of taxpayer money on a recount which had no possibility of changing the result,"

That's bull. The recount could certanly have changed the result. If the 7000 found votes had been determined to be fraudulent that would have swung it right there.

What you are arguing is that knowing what we know now to be true the recount couldn't have changed things, but we didn't know those things until a recount was done. That was the whole point.

Tlaloc – (above) Your statement would be true IF AND ONLY IF the votes had actually been FOUND. We KNEW for a fact that they were NOT -found-, they simply weren't -reported to the PRESS- on election night (they were present in the official totals ALL ALONG).

Kloppenburg KNEW from the get-go that she didn't have a prayer (which is why she isn't challenging in COURT (see my previous comment on sanctionable attorney conduct under Wisconsin State Bar Association Procedure Rules).

The votes were reported on election night, but missed being reported in the county-level totals that the media accumulated to track the results on election night. You know this, having read this blog. And you also know that for these votes to be "found", the City of Brookfield would have had to have had zero people voting. You know that is not reasonable.

I'm not going to give Kloppenburg any credit for integrity. It wasn't that she did the right thing because she realized that she was in the wrong and couldn't possibly gain anything by appealing the decision. She threw in the towel because the issue was polling very, very badly, and pursuing the issue would have turned even more voters against her side.

Hmmm. If the politics of spite were in play, whatever state government department she works for should be defunded.