Former presidential candidate John Edwards was indicted Friday on criminal charges by a federal grand jury in Raleigh, N.C, for misusing campaign funds to cover up an affair.

Edwards faces six counts — four of illegal campaign contributions, one of conspiracy and one of false statements. 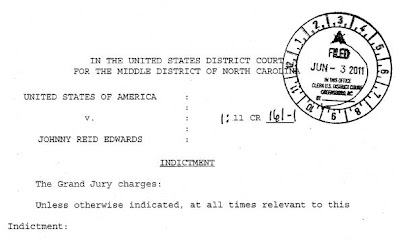 Here is the Arrest Warrant and here is the Indictment.

The Count One is for conspiracy to file false FEC reports:

15. The purpose of the conspiracy was to protect and advance EDWARDS’ candidacy for President of the United States by secretly obtaining and using hundreds of thousands of dollars in contributions from Person C and Person D, well in excess of the Election Act’s limit, to conceal EDWARDS’ extramarital affair with Person B and Person B’s pregnancy with his child. EDWARDS knew that public revelation of the affair and pregnancy would destroy his candidacy by, among other things, undermining EDWARDS’presentation of himself as a family man and by forcing his campaign to divert personnel and resources away from other campaign activities to respond to criticism and media scrutiny regarding the affair and pregnancy.

Counts Two – Five are for knowingly accepting illegal campaign contributions during 2007 and 2008 from two different sources:

35. During the calendar year 2007, in the Middle District of North Carolina and elsewhere, the defendant, JOHNNY REID EDWARDS, while a candidate for federal office, knowingly and willfully accepted and received contributions from Person C in excess of the l{mits of the Election Act, which aggregated $25,000 and more, and did aid and abet said offense.

Edwards is the kind of lawyer that gives ambulance chasers a bad name.

When, in his debate with Cheney, Edwards tried to demoralize and dampen the turnout of religious conservatives by declaring his phony admiration for Cheney's relationship with his "lesbian daughter" (I kept waiting for him to say, "Let me repeat that … lezzzzzz-beeee-an daughter!!"), I went from dismissing him as a lightweight pretty boy, to realizing that this was not a good man. Really, really not a good man.

How fast and far he has fallen … and how deserved.

P.S. Professor, knowing you're a great music fan like me, this is for you (with absolutely no apologies to Jimmy Buffett):

Sexting away again in TwitterWeinerville,

Searching for my most awesome crotch shot,

Some people claim that there's a coed to blame,

But I know it's some hacking teabagger's fault.

I am more than a little concerned the prosecution has over reached here. They are arguing that any gift or aid that could possible be construed as helping a campaign is now a campaign donation.

For example, if John Edwards car broke down on the way to a campaign appearance and I happened to have a spare fan belt, that would now be a campaign donation.

I don't think the campaign contribution limits were written with such things in mind.

This case is not one I'd be proud to have prosecuted.
http://pajamasmedia.com/tatler/2011/06/03/why-i-think-the-edwards-prosecution-is-a-bad-idea/

All I can say is it couldn't have happened to a nicer guy.

Rick Caird: if that fan belt cost 25,000usd then, yeah that might be a campaign donation.