When you sell your Subaru and take the bus, then we can talk

When you sell your Subaru and take the bus, then we can talk 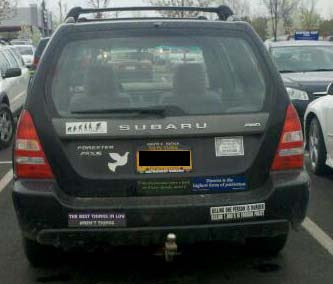 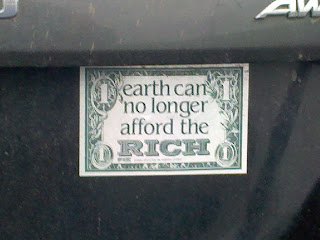 If it wasn't for the "Rich", this Subaru car owner wouldn't have a job nor a car.

"If it wasn't for the "Rich", this Subaru car owner wouldn't have a job nor a car."

And the owner also wouldn't have whatever gets attached to that hitch on this Sabaru – boat, camper, snowmobile trailer, or whatever.

"he finally noticed an incongruity between Brecht’s politics and his life. Although a cold-blooded—indeed bloody-minded—advocate for public ownership of the means of production and state confiscation of private wealth, he always took care to copyright his plays. More, he made sure the royalties were deposited in a Swiss bank account far from the clutches of East Germany, where he was nominally a citizen.

“His protestations [against capitalism] were not borne out by his actions, nor could they be,” Mamet writes. “Why, then, did he profess Communism? Because it sold. .  .  . The public’s endorsement of his plays kept him alive; as Marx was kept alive by the fortune Engels’s family had made selling furniture; as universities, established and funded by the Free Enterprise system .  .  . support and coddle generations of the young in their dissertations on the evils of America.”

As the accelerating sequence of that last sentence suggests—from Brecht to Marx to the entire system of American higher education—one wispy aha! leads the convert to a larger revelation and then to one even broader and more comprehensive. That’s the way it is with conversion experiences: The scales fall in a cascade. One light bulb tends to set off another, until it’s pop-pop-pop like paparazzi on Oscar night.

And then Mamet thought some more, and looked in the mirror.

“I never questioned my tribal assumption that Capitalism was bad,” he writes now, “although I, simultaneously, never acted upon these feelings.” He was always happy to cash a royalty check and made sure to insist on a licensing fee. “I supported myself, as do all those not on the government dole, through the operation of the Free Market.”

He saw he was Talking Left and Living Right, a condition common among American liberals, particularly the wealthy among them, who can, for instance, want to impose diversity requirements on private companies while living in monochromatic neighborhoods, or vote against school vouchers while sending their kids to prep school, or shelter their income while advocating higher tax rates. The widening gap between liberal politics and liberal life became real to him when, paradoxically enough, he decided at last to write a political play, or rather a play about politics. It was the first time he thought about partisan politics for any sustained period."

"Earth can no longer afford the Rich."

Doesn't this person realize that he/she is most likely a member of the richest 1 or 2 percent of the earth's population?

"The Earth can no longer afford the rich."

Thanks for the Mamet link! He lives here in my hometown of Santa Monica. If I ever bump into him, I'll turn him on to Legal Insurrection.

"For Mamet this bit of innate Chicago wisdom has only been reinforced in Santa Monica, the leftwing, paradisiacal community where he has lived since 2003. It’s the same game in Santa Monica as in Chicago, except with an unappetizing lacquer of self-regarding piety from the pols. Not long after moving to the city, Mamet undertook his first foray into civic activism, when the City Council revived a 60-year-old ordinance and tried to force Mamet and his neighbors to cut the hedges around their homes, in accordance with a newly articulated "public right to the viewership of private property."

Yep, that's my Santa Monica. I wonder what happened to that other ordinance they were pushing … requiring every house in the city to have a wheelchair ramp to its front door. Sure, for all those wheelchair-bound door-to-door salesmen who are just itching to get their wheel in the door to our house.

@ LukeHandCool. If you build them, they will come.

All: Are we certain the owner didn't simply misspell the last word? That seems more likely for a leftie with a weird taste in cars.

Professor: It seems Ithaca is a "target-rich environment". (No violent imagery intended)