Thanks to reader Dave, who sent this note accompanying the photo of a “Re-Elect President Carter 2004” bumper sticker:

“I took this while stopped at a light on MLK Blvd in Baltimore. Now, if it said “Re-elect Carter 2012″ I would have thought to myself ‘Oooh, clever commentary on the job the president is doing, I want one”. But it doesn’t, it says “Re-elect Carter 2004″. Huh? W=Carter?? Hoping for Jimmy to run instead of Kerry? What does it mean? I wonder if any of your readers get it, frankly, it’s right over my head.” 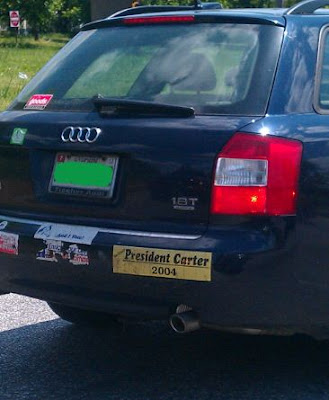 "In the Washington Post today, there's a blog published by Chris Cillizza, and it is obvious that both Republican Washington insiders, as well as Democrat power brokers want the nominee to be Mitch Daniels."

I recall seeing something like that around Los Angeles, then. It's a pretty straightforward joke equating a Kerry 1st term with a 2nd for Carter.

Daniels has been described as too bland to face the (pseudo-)charismatic Obama.

The beginning of the MSM reinvention of Sarah Palin?

The Tragedy of Sarah Palin

Lets face it, Carter was the biggest loser in the raid on Abottabad. Up until Bin Laden's sudden demise, Obama had been making Carter look good.