Obama: No Photo For You

Obama: No Photo For You

Will no mean no, or will it mean no until later?

Via Mark Knoller of CBS News: 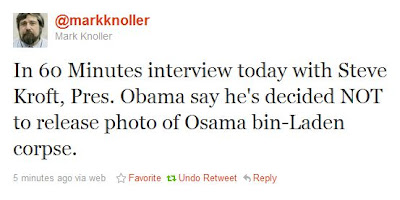 They'll have to release them. This is the same stupid move that they made with trying KSM in NYC, closing Gitmo, etc. And the photos will come out, and the WH, instead of controlling (however ineptly) the narrative, will instead look like the amateurs they are. Always reacting just a shade too late and just a smidge off base. Pathetic.

All BHO comments come with an expiration date.

Just call the photos "never before seen, horrific Abu Ghraib pictures," or "recently discovered pictures of coffins of American soldiers killed in Bush's Iraq War, circa 2005" and the lefty hordes and the media will be demanding they be released.

Actually I think this is pretty similar to the ploy of getting the birthers all frothed up and crazy then releasing the birth certificate to further marginalize them. And honestly I think it'll work on a decent number of GOP voters (say 25-30%).

@Tialoc – You have it backwards. I doubt many Republicans will think Osama is alive or doubt it, that will come from the far left (e.g. Cindy Sheehan) and the jihadis.

No Photo.
No Body.
DNA tests allegedly conducted on the spot with near instant results (I thought that stuff was highly sensitive to contamination and the results often take days to get back).

The only nuclear armed Muslim totalitarian state doesn't scramble jets after it's air space was violated and headed toward a territory where there's a high concentration of former military elites living.

It's almost as if they are intentionally fueling the conspiracy theorists.

The whole struggle over the release or non-release of photos seems really stupid on their part because it unquestionably telegraphs fear — NOT a concern over "sensibilities" as some have argued. It is the last thing the Administration wants or can afford at this point.

And, I suppose as long as there is at least one big-mouth boob kneading beads in the situation room, who knows what he or any one of them will likely say (or release) next!

Stories about in-fighting within the Administration leading up to the launch of the operation are also beginning to emerge, with at least one storyline suggesting that Valerie Jarrett had been acting as the gargoyle-in-chief, resisting calls by a relatively united national security team to move ahead with the raid, and (for a while) supposedly insulating the President from having to make a firm decision to move ahead.

To me, it sounds like typical D.C. rumors of infighting, and is not any more credible than dozens of other possible scenarios.

I do, however, suspect to some extent he was forced into going ahead with the raid in Abbottabad because it would have inevitably leaked out (most likely from one of the strong supporters of the mission) that he had passed up a solid opportunity to get OBL.

But I personally credit him with making the decision to go ahead. It was the right thing to do, and it had obvious risks associated with it.

The result of the action in Abbottabad as well as certain key elements of the plan itself (i.e., the burial at sea) were really solid as far as I was concerned.

But withholding photographic evidence now, after allowing one top official (Panetta) to announce at least one photo would be forthcoming, seems just plain stupid.

He just threw Panetta under the bus! And according to much of what I've read, it was Panetta's plan as much as anyone's!

Maybe you've seen the photo of Obama looking cool in sunglasses with the caption, "Sorry it took so long for me to get you a copy of my birth certificate … I was busy killing Osama bin Laden.

What a joke. I'd like to make a similar one with a picture of President Bush with a caption like, "Sorry I couldn't be bothered to acknowledge all the lefty 911 truthers and their wacky theories … that would be below the presidency … and I was too busy doing all the thankless grunt work and preparations under a neverending storm of lefty and media criticism to prepare for bringing Osama bin Laden to justice, so the president who follows me in office can take credit for it, even after Valerie Jarett has him dithering and he needs to finally take 16 hours to make up his mind … Wikileaks, Panetta, and Hillary finally making his mind up for him."

I'd like to make up a little image like that … but I've got better things to do.

So President O'Bonehead believes that releasing photos of OBL's carcass should not be done, in order to prevent Islamic extremists from getting all wee-wee'd up and outraged and apoplectic and so forth? I've got news for you, Mr. President: Being outraged and apoplectic is in the DNA of Islamic extremists. They believe they are justified in killing anyone who does not worship Allah, so a little thing like a photo of a dead guy is not likely to horrify them. They behead people for sport, so photos of OBL are not likely to make them say "Ewwww".

Yeah, sorry, I've gotta give POTUS the benefit of the doubt here too. There are big problems either way, but I'd imagine that those are REALLY gruesome photos. "Double-tap" might be a euphemism for something most people never see and never want to.

He might do well to seek some kind of independent verification short of public release.

"I'd like to make up a little image like that … but I've got better things to do. "

Probably for the best, that joke needs a lot of work.

I'm aware of the limitations of the Twitter medium, but whenever I read anything that replaces "are" with "r" and "you" with "u" I immediately think "illiterate moron". Which I am more than aware does not characterize you, but still…*shudder*