Spotted by reader Bob from Windsor, CO, while visiting in Irvine, CA.

But what does it mean?  The usual configuration has lower case “man” twice, and is taken to mean that there is no real difference between the political parties.

Deep meaning, or a case for The Most Expensive Proofreader in America? 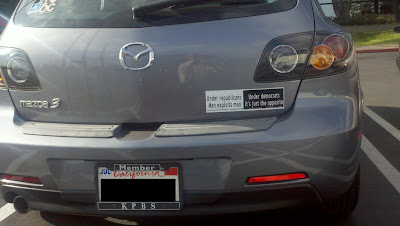 (I like this explanation of the difference between Republicans and Democrats somewhat better.)

Senator Dirksen's observations are as pertinent today (moreso!) as they were back in 1967.

Of course liberals ('labellers'), being the stubborn lot that they are, blame the ills of society on conservatives. Imagine that.

When I picture a liberal in my mind, I see an adolescent with fingers in both ears, eyes closed, mouth spewing 'lalalalalalalal'……

The answer might be in that find print under the slogan. All I could make out was "… for Understanding."

I believe the person was referring to "Man" as in G-d, or the Messiah, who the Bible calls "the son of man." The "man" is just the everyday person living his/her life day by day.

It somehow makes me think of Transcendental Meditation, New Age religion, and that once we all "evolve" to be a g-d (as Shirley MacClaine and her ilk believe), then the Utopian world will arrive, ending all this messy politics. Along the lines of John Lennon's Imagine "….and the world will be [or live] as one."

Or, it could be that expensive lack of proofreading….

I'm with Frank on this one. 'Man' refers to 'The Man,' whom the sticker considers Republicans to be in cahoots with. It's the typical liberal narrative of giant corporations, the wealthy, etc. being Republicans who then exploit the poor.

I think the sticker is also proud that man can then exploit 'Man' under Democratic rule. It fits their 'defenders of the poor(or any other list of people whom require help)' mentality.

However, along the lines of Dorothy Parker's four martinis and "under the host" quip… it could mean Republicans are more likely to be brutish gay males, and Democrats tender lesbians

for anybody who's taken "Sticker Heteronormative Oppression, Latency, and Deconstruction 101."

That's an old Soviet-union saying:
Under Capitalism, man oppresses man. In Communism, its exactly the opposite.

Tip O'Neill summed it up best:

With the high rate of single mothers who are depending on the [taxpaying] village to raise their children, with abortions decreasing the black population, with more and more people relying on the government largess and not their own ambition and personal responsibility, how's that working out for you, Democrats?

If "Man" represents the proper man, the individual, and "man" represents the generic man, then in all iterations this statement is false. In all cases, it is Man who exploits another Man. Obfuscating the role of Man in government (or other bodies of authority) does not reduce the culpability of individual civil servants, and should not provide a pass to individuals who benefit from redistributive change (i.e., recycled wealth).

While corruption is the rule of left-wing ideologies, it remains the exception for others, and, as such, it is imperative that competing interests curtail progressive corruption.

Since everyone is vulnerable to delusions of grandeur, it is necessary to consider that everyone must be held accountable for their actions, including individuals who first subscribe to a preferred ideology.

In order mitigate progressive corruption, we must resort sparingly to involuntary exploitation in order to fund individual or group welfare.

In the establishment and development of society, it is necessary to compromise individual dignity. Let's hope we avoid the pitfalls of regressive systems, and choose a proper balance. One that will optimally promote the general welfare while preserving individual dignity.

my interpretation is that it means that it doesn't matter who is in charge, both parties are corrupt.