How Much You Wanna Bet

How Much You Wanna Bet

that this person has an iPhone or iPad made at a factory in China, which she uses to read liberal blogs which object to outsourcing by big corporations.  And hurries into and out of Wal-Mart really quickly so as not to be spotted, with an excuse lined up just in case she bumps into another bumper-sticker wearing friend: 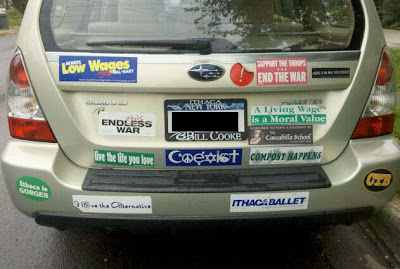 "But I can buy the same damn thing on a Wal-Mart shelf half price
And still look sexy, just as sexy as those models on TV
I don't need no designer tag to make my man want me
Well, you might think I'm trashy, a little too hardcore
But in my neck of the woods I'm just the girl next door"

Yesterday, Sarah Palin said this would be her choice of song for a ringtone. Makes me wonder who a surprising number of Walmart shoppers – of both parties – might vote for in 2012.

I used to work in at Dexter Shoe Outlet in Corning (NY). For decades, Dexter shoes were noted for their quality and comfort and being made in America. When I was hired in 1998, the company had 90+ outlet store across the country.

Then Berkshire-Hathaway bought the company and changed all that. They closed down the factories and outsourced to foreign countries. They began closing the outlet stores, too. (I heard Buffet didn't like outlets.) When they closed ours in October of 2003, there were just a handful of outlets left. The ones which remained became Super Shoes (or something like that).

We had customers who were livid, outraged!, when they noticed their favorite shoes were no longer made in America. The quality suffered as a result, too. But, it was either cost or country, and the company determined their customers would pay just so much for a pair of shoes, regardless of where they were made. Low-priced shoes made in America was no longer feasible.

I wanted to say: You can have low-priced shoes or shoes made in America, but you can't have both. Instead, I had to stand there and take their rants.

If it wasn't for Payless, I'd be shoe-less!

As for progs running into another proglodyte in Wal-Mart, I think it's time to update the old "Baptist" laugh-line about buying being caught in the liquor store:

Progressives never speak to each other in the Wal-Mart store.

Whenever I see the meme that Wal-Mart is a low wage employer taking advantage of it's employes, I "always" say, "it's really about the unions wanting to get into the pockets of 1+ Million employees so that they can funnel more money to Democrat campaigns. I mean really, the unions think they can improve the wages and benefits at one of the better paying employers in the retail sector?"

Being part of a union means that part of your wages automatically goes to support Democrats. That's what this is all about.

I've learned not to bet against sure things, so: No Bet.

Kitty – I miss Dexter Shoes too. They were the only place that I used to be able to get shoes that comfortably fit without 3 months of breaking in.

As for the plastered car above:
Whenever I get someone who says "Walmart is Evil" I always ask them, are you happy with your standard of living? Because it's Walmart that makes that possible." The price competition they bring to the market reduces the inflationary pressure that would otherwise be present from companies that have buckled to having a Union or that are situated in places prone to "living wage" debates (read: job killing; ex: Chicago, specifically the South Side's "food desert") where Walmart has determined the exact boundary of where the idiots who write the local laws have power and situate their stores immediately outside the boundaries.

Yes, the selection is somewhat limited at Walmart. However, the fact that I can pay less for what I GET at Walmart means that I still have SOMETHING left over to actually SPEND at another store, rather than just being entirely broke from filling up my car and buying groceries.

Under our current economic model, Kitty has got it right: You can have "made in America" or you can have lower prices (with an attendant increase in speed but generally a decrease in quality). It's an Iron Triangle: Quality, Speed and Price: Pick two, because you're going to get hammered on the third. From China, India, Africa or the Middle East, you can get something fast and cheap, but the quality is going to suffer.

I'd lay money that they're a pro-abort Catholic, from the emphasis on living wage.

alan markus –
They're still holding protests in front of the new grocery store for not being union, over a month and a half after opening.
Punchline: Winco is worker-owned.

This is hilarious. The Daily Show at its best. If only they had more segments like this.

And this is serious. From MSN Money columnist Jim Jubak, Let Wal-Mart fix US health care.

"Wal-Mart has decided it can make money by applying its always-low-prices strategy to drugs and medical services. For example, in 2006, the company first rolled out a program to sell a long list of about 300 generic drugs for $4 a prescription. It added 24 more drugs to the list in 2007.

… And Wal-Mart isn't stopping there. In April, it opened the first of its walk-in health clinics in stores in Atlanta, Dallas and Little Rock, Ark. This joint venture with local hospitals will build up the almost 80 clinics already in place in Wal-Mart stores. The goal is 400 co-branded clinics by 2010.

… And it gets even more attractive when you remember that it comes without all the paperwork so typical of the modern co-pay, deductible, delayed-reimbursement health insurance system. No appointment necessary, so harried consumers can get a kid vaccinated while shopping. No insurance necessary either. Got cash or a credit card? You can see a doctor.

And let me tell you, anyone who thinks this isn't an attractive way to deal with a minor problem — for customers in every demographic and with every kind of health insurance — hasn't tried to get an appointment to see an overworked doctor to check out what might be strep throat or an ear infection. I've got good health insurance, but I've used clinics like these in stores belonging to Wal-Mart competitors for exactly that kind of problem."

Since when did Subaru start hiring union workers? Or is this idiot too stupid to know that Subaru, a foreign owned company, is non-union at its American plants?

No one can ever accuse a liberal of being smart or informed.

LHC-
US HealthWorks is pretty awesome, too. Even with insurance, I couldn't really afford regular doctor's visits, and I didn't want them; I was able to walk in, get my sore throat that made everything taste like broccoli examined, and walk out with a prescription to clear it up in less than an hour. (Some sort of infection.) Clean, polite, made effective use of staffing. (ie, don't have doctors doing what a nurse can, etc)

Compare with my current OBGYN, in whose waiting room I have never spent less than an hour after my appointment is supposed to start, and who never use a nurse if a doctor can do it. (They also keep staff in the office while they're sick, and to lie about it– my entire household is still recovering from a sickness that I got there on the fifth.)

Guess which one makes a big deal about how well they treat their staff?

"LHC-
US HealthWorks is pretty awesome, too. Even with insurance, I couldn't really afford regular doctor's visits, and I didn't want them; I was able to walk in, get my sore throat that made everything taste like broccoli examined, and walk out with a prescription to clear it up in less than an hour."

Foxfier, I just googled US HealthWorks (I'd never heard of them before) and see there are a couple locations not too far away. Thanks for the tip! Wal-Mart is too far away. We always drop in CVS or Wallgreens to get our flu shots … would never go through the hassle of making a doctor's appointment for that again.

I personally like the "A Living Wage is a Moral Value", because it means that everyone working for less than a living wage is immoral.

Says the Forester was built in Japan.

Cant make this stuff up.

Assembly/Parts Content: While Subaru has a widely-acclaimed manufacturing plant in Indiana, the Forester is assembled in Ota Gunma, Japan. Both the engine and transmission are of Japanese origin. 0% of the parts are produced in North America.

Note the sticker which says, "Honored to have a student at the Cascadilla School".

The Cascadilla School (http://www.cascadillaschool.org/) is a private prep school. At least this person has the sense to take her child out of the Ithaca government school. I wonder if she supports school vouchers for people who can't afford expensive moving billboards.

Prof, was this taken at a Walmart?

They all drive Subarus, Hondas, Toyotas, VWs, Mercedes, etc, — people like this — without even realizing the irony.

And just incidentally, Subaru is a part of Fuji Heavy Industries, the lineal successor to the Nakajima Aircraft Company which along with Mitsubishi, made most of the aircraft with which the Japanese Empire sought to conquer East Asia.

These bumper stickers look SO GOOD on a foreign car made by non-union workers who've never heard of a 'living wage'.

And you're in a UNIVERSITY TOWN! Aren't people supposed to learn stuff there?

My son was sick with a fever on Thursday and a sore throat on Friday. Hubby took him to Walgreens Take Care Clinic on Friday, but it was closed due to an emergency. So Hubby called me to see where to take The Little Guy. I told him to go to Walmart. The Little Guy was seen, diagnosed with strep, and Hubby paid the $50 bill without using insurance. Worked out well all around.