In Wisconsin government, there seems to be a problem with pro-union politics interfering with job responsibilities as public servants.

First it was police union members urging protesters to defy the Governor and legislature when it came to the takeover of the State Capitol.  Then it was the Dane County Sheriff declaring that his officers would not act as “palace guards” at the Capitol.

Now it turns out that an Assistant Attorney General in the Wisconsin Department of Justice, who was considered an expert on the Open Meetings Law which is at issue in the lawsuit challenging the budget repair bill, secretly was offering legal advice to the 14 Democratic Senators who fled the state.

As reported at Wisconsin Politics:

State Representative Steve Nass (R-Whitewater) released an e-mail from Assistant Attorney General Thomas Bellavia that raises serious ethical and legal doubt on the Wisconsin Department of Justice’s ability to defend the enactment of the Budget Repair Bill and the Open Meetings Law Case in Dane County. The e-mail from a senior member of the Wisconsin Department Justice shared sensitive legal advice with fleeing Senate Democrats that he may have obtained as a part of his duties for the department.

Additionally, the opening line of Bellavia’s February 27, 2011, e-mail to Senator Erpenbach (D-Middleton) and Senator Mark Miller (D-Madison) reads: “I am a political supporter of your current efforts regarding the budget repair bill.”

“I have little faith the Wisconsin Department of Justice can be trusted to fairly and impartially represent the taxpayers on all matters relating to the Budget Repair Bill becoming law. In my view, this Assistant Attorney General has crossed the line and should do the honorable thing and resign immediately,” Nass said.

“I suspect that the Department of Justice will simply circle the wagons and attempt to cover up this matter. I believe there is no other choice left but obtaining outside legal counsel to defend the interests of the Legislature and the taxpayers,” Nass said.

Nass’s letter and the e-mail in question are here.  Here is the e-mail (click on image to enlarge): 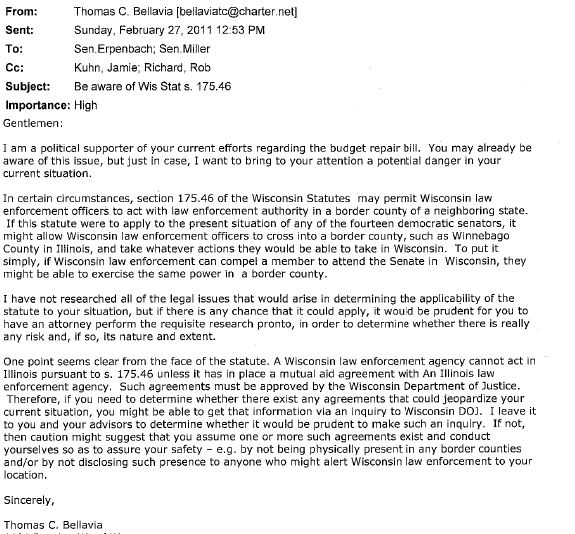 Bellavia apparently was the Department’s expert on the Open Meetings Law, as indicated in this video from 2007:

It is unclear whether and to what extent Bellavia has been involved in the actual defense of the budget lawsuit.

It would seem probable that he would be consulted since he is held out by the DOJ as an expert on the Open Meetings Law. If he did participate in rendering legal advice to the DOJ without disclosing he also had rendered legal advice to the Democratic Senators, that would raise serious ethical issues.

Sorry, OT Professor, but this just happened less than a mile from my house. Pipe bomb explodes outside synagogue in Santa Monica.

I can hear the police helicopters.

Actually, they are probably news helicopters.

Why not file an ethics complaint with the Wisconsin Br?

It certainly sounds to me like a a grievable ethics violation – of course, I'm the the Wisconsin Bar Grievance Committee is neutral and will deal with this fairly…NOT!

Question; if the Democrat reps had requested legal advice from this ass't AG, would that have been permissible?

From the email, it sounds like it was both an unsolicited email and a partisan supporter's contribution to the cause. Clearly questionable and probably a grave ethics violation. Definitely a conflict of interest for him to at all work on the cases, putting the WI DoJ at a disadvantage, as their "expert" would need to recuse himself or be removed from the state's team.

How did the memo surface? Kudos to the Republican rep who made it public – avoiding the typical cover-up of partisan hacks by the left.

The Federal DOJ has many political partisans in it. Why should a state DOJ be any different.

Bloody Republicans. If it wasn't for them we would not be exposed to this information. Republicans – Responsible for the publics loss of confidence in the justice sysytem.

Ethics — whatever advances the cause. Lenin would be proud.

Let us immediately fire Attorney Bellavia to reduce the potential for a conflict. How can the DOJ represent the people when it is riddled with political moles with their private agendas?