These Bumper Stickers Do Run

These Bumper Stickers Do Run

That was my initial reaction to this set of bumper stickers spotted by reader Jeff in Longmont, Colorado: 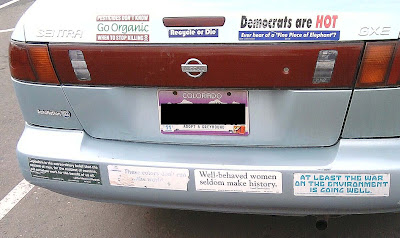 On the faded bumper sticker: these colors DON'T run the world, under Obama's regime. Time for his term to end. Come on 2012!!

About the Keynes bumper sticker: this statement is an exceptional example of the idiocy of Keynesian economic theory. Capitalism is not a person – it does not possess "benevolence" or a lack thereof; just as with a killer who shoots someone, it is the INDIVIDUAL who commits the crime, NOT the gun.

Capitalism is an economic system, an impersonal economic form of "survival of the fittest" – you would think atheists would embrace Capitalism for this reason alone. But no, they irrationally personify this economic system. They choose to believe, irrationally, that man is evolving upward ("getting better and better"); thus, Utopia is the final result – something history has proven over an over across the centuries to be flatly untrue.

Why do Democrat/libs (still!) cling bitterly to Keynesian economics after it has failed EVERY TIME it has been tried?!? Is that not the very definition of insanity?! Funny, I seem to recall saying that before, about some other liberal sacred cow….

Liberals. Irrational. Insanity. Hmmmm…… There seems to be a pattern here…..

Despite their lip service and false reverence of democracy (as *they* pervert the definition), these people aren't liberals in any sense of that word. They're fascists. They believe their ends justify any means, including violence.

Funny how Keynes got that bass ackwards. Really his economic visions lead to the nastiest of men having power and control. In a capitalist system at least everyone has potential opportunity and the system is based on voluntary transactions. In a Keynesian world, only those who make it into the calculations of the economic wizards have a chance. In the end it really just creates a redistribution of wealth from ordinary people to the political class and rent seeking interest groups and corporations. They just use the bread beggars to buy votes through coercive pseudocharity.

I kinda like the capitalism one.
I would put that on my car, only I subscribe to that "extraordinary" belief, don't find it unlikely on its face. I would phrase it slightly differently.
Maybe:
Capitalism is the belief that selfish men (and women!) can be tricked into working for the benefit of all.

We don't seem to be talking about the "kook" factor here with all these bumper stickers. Hasn't anyone else had the experience the more stickers, the kookier the humanoid sporting them?

And add to that the fade factor. Some serious mental shortcomings must be involved when one denies printed paper faces and they would rather contribute to an illegible collection than peel and replace with new.

Experience has taught me not to follow overly stickered vehicles too closely, lest something splatters back.

Ha, looks like someone took exception to either the word "Democrats" or to the idea of their wimmin being hot.

But "Well-behaved women seldom make history" is a saying to live by. Maybe I'll be famous and make a difference by flouting convention. Think I'll drive a gas guzzler and fast, take long showers on occasion, set the AC thermostat below 74!, eat meat, wear fur, use "inorganic" fertilizer on my genetically modified hybrids, own guns, donate to Koch causes, use "he" instead of "they", think Islam is tyranny, date insensitive guys, AND, most daring of all, use incandescent bulbs.

As if non- or anti-capitalists, in the form of the ideologically left, are not "nasty." They are some of the nastiest creatures on earth.

OMG! sort of runic rhyme … you're a girl !! Conservative girls are the coolest!!

How is capitalism the belief that anyone is working for the benefit of all or for a common good?

My non-economist understanding is that capitalism is about people working for the benefit of themselves and their interests, and that, in the aggregate, such a system produces some kind of emergent (tho' uneven up close) optimization of opportunity realized at the macro level.

I shouldn't think any theory of transaction should go for the "ideal," imo. Idealizing can only be an assertion of some one group's vision that imposes on all and oppresses at least some. Trying to top-down engineer Fairness beyond extending basic civil liberties to individuals and removing legal impediments to potential is to hold to the absurd conceit that basic human industry can be centrally controlled and with benign to productive results.

Capitalism in a relatively free society can result in some unfortunate conditions, to be sure, but not by any lack of legal opportunity or because magnates or state officials lock people up for selling a competitor's products or unPC services, or for using non-Union labor. We're getting uncomfortably close to such scenarios, though. May the Tea Party rave on!

LOL! Try to imagine a woman yelling, "Make love to me like Alan Alda!!"

Did you see this news item concerning the long arm of government? The regulatory authority involved would appear rife for political abuse and campaign money squeezes, since any CEO might feel tacitly pressured to do what it takes to remain in good partisan standing, despite any non-complicity on his or her part:

A government attempt to oust a longtime drug-company chief executive over his company's marketing violations is raising alarms in that industry and beyond about a potential expansion of federal involvement in the business world.

The Department of Health and Human Services this month notified Howard Solomon of Forest Laboratories Inc. that it intends to exclude him from doing business with the federal government. This, in turn, could prevent Forest from selling its drugs to Medicare, Medicaid and the Veterans Administration. If the government implements its ban, Forest would have to dump Mr. Solomon, now 83 years old, in order to protect its corporate revenue…

The agency said a chief executive or other leader can be banned even if he or she had no knowledge of a company's criminal actions. Retaining a banned executive can trigger a company's exclusion from government business.

The "action against the CEO of Forest Labs is a game changer," said Richard Westling, a corporate defense attorney in Nashville who has represented executives in different industries against the government.

According to Mr. Westling, "It would be a mistake to see this as solely a health-care industry issue. The use of sanctions such as exclusion and debarment to punish individuals where the government is unable to prove a direct legal or regulatory violation could have wide-ranging impact." An exclusion penalty could be more costly than a Justice Department prosecution.

He said that the Defense Department and the Environmental Protection Agency, for example, have debarment powers similar to the HHS exclusion authority…

I wish I could say I'm surprised, but I'm not. It's gangster government.

"Mr. Solomon became chief executive in 1977 and built Forest from a maker of vitamin tablets into a global company with more than $4 billion in annual sales.

His son is writer Andrew Solomon, who won a National Book Award in 2001 for his book about struggling with depression. Inspired by his son, Howard Solomon pushed Forest into the antidepressant market and turned Celexa and Lexapro into successes. In the year ending March 2004, the two drugs accounted for about 82% of the company's sales."

Depression and anxiety run in my family. Lexapro has done wonders for me. As Milton Friedman says in the video I posted up above, no bureaucrat has ever created something of immense value for society. But those "evil, nasty" capitalists sure do, again and again.

I'd love to ask the owner of that car if his/her iPOD, cellphone, laptop, desktop printer/copier/fax machine, GPS etc., were created and produced by government bureaucrats.

Want a laptop computer the size of a moonbounce? Want an iPOD that looks like a pull-along suitcase that's capable of holding up to three songs? …. have government design and produce them!

Well said, LukeHandCool. You always manage to bring a happy or at least passionate and incisive perspective to the discussion here. ;-]

Socialism is the extraordinary belief that someone else knows how to spend your money better than you do.