This buffet of bumper stickers was seen in Roanoke, VA, has some seen here before (Coexist, Bake Sale) and some new ones: 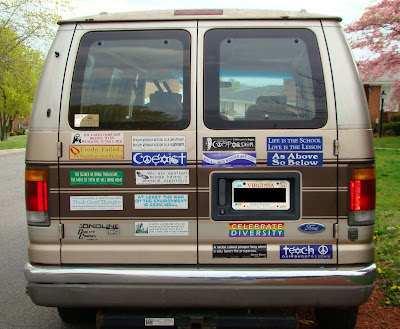 Thanks to reader Tim for the photo.

Education in the US is a bottomless money pit – there is NEVER enough money, according to educators! Students can't read? Throw more money at the problem. International test scores cratering? Throw more money into education.

Never worked before. Why would it work now?! It doesn't – yet we continue with this same liberal folly, expecting different results. Is that not insanity defined?

Roanoke is near the TN border in VA – you would think it's a conservative area. But there are several colleges and universities there, not to mention the heavy union influence (coal mining, other manual industries).

There are times I feel deep despair. Then I watch as people like Sarah Palin stand up and speak out, saying more in 15 minutes than most say in a year. Or Allen West, who leads by example, pulls no punches, and stands against liberalism.

I hope you have some more encouraging bumper stickers to share – soon!

Memo to the Media: Obama Is Not Popular!

"President Obama is not popular. He has not been popular for a very long time. Why should a single speech be expected to move a needle that hasn’t budged in a year?"

"Who does Obama look like right today? I’d say Carter. Economic growth is slowing down, inflation is on the rise, the deficit is out of control, swing voters have gone away, and the guy in the Oval Office doesn’t seem to have the foggiest idea what to do about any of it."

Okay, when the Leftists preempt Lord of the Rings … it's personal.

Saw an old VW van years ago with the back covered with these sort of bumper stickers, except for one spot..
I happened to have a Go Guard bumper sticker… I'm pretty sure they never noticed.