So Tell Me About Paul Ryan

So Tell Me About Paul Ryan

Specifically, tell me about Paul Ryan as a presidential candidate, now that there are murmurings that he may jump in.

Why not?  Republicans are going to have to defend the Ryan plan, who better to do it than Ryan.

Someone who conveys a seriousness about policy without being a Washington, D.C. insider, who would make mincemeat of a teleprompterless Barack Obama, someone who is willing to face down even the astroturfed crowds sent by Americans United for Change for videotaping by Think Progress.

When Jim Newell of Gawker, formerly of Wonkette, is baiting Ryan to run, maybe we’re onto something.  Bring on the Gawker and Wonkette crowd, and let’s have at it.

(h/t to Fuzzy Slippers for the idea, and reader Dan for the video link)

Update:  A Gallup poll just released shows strong support for Ryan’s plan among all age groups except 18-29, and the support gets stronger the higher the age bracket: 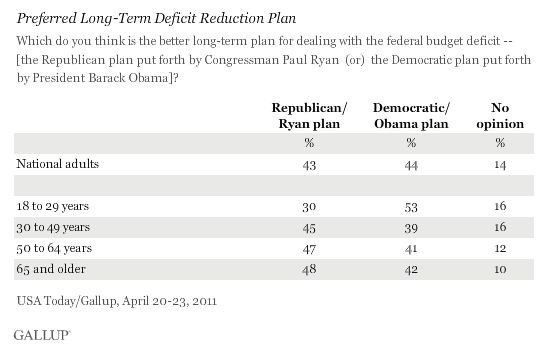 And the disruption at Ryan’s event yesterday, it was caused by SEIU and Teamster officials.

Ryan will be excoriated for submitting a budget that wants to reform Medicare after he voted for a huge expansion of the program without raising taxes to pay for it when Republicans controlled the House, Senate and Presidency.

I like Ryan, but that's a huge vote to have to explain.

He's got an imperfect voting record, but that's easily overcome (none of the candidates in the running or even with the outside chance of running is anywhere close to it). I don't think Paul Ryan ever wants to be President, Majority Leader? Yeah. Speaker of the House? Yeah… But President of the United States? Ryan likes being a Congressman & doing what he does (Being a complete policy wonk & investing himself deeply in the budget & health care issues).

I love that he can take a stance & explain it in great detail- even if I don't agree with him I find comfort in knowing that he took each vote & each issue seriously.

The guy is smart, competent, confident, & in his own way charismatic. Depending on the list of candidates on the ballot he may not be my first choice, but he'd be very very high up on my list if he did run (Probably #2 or #3 with the current crop of meh nice guys)

I find all of the "known" candidates real snoozers. Can't get excited about one of them. I can't imagine voting for Trump in a primary, though. I can't see why Ryan's votes for prescription drug benefits and TARP should disqualify him. He voted against all of the Pelosi outrages and that's what really brought on the crisis to the point where it was feasible to take the risk Ryan took with his budget proposal. If he's on the primary ballot, I'll probably vote for him

Paul Ryan is a "young gun" who wants to remain in the House, loves doing what he's doing. He has pretty clearly stated he does not want to run for president. I believe his comment was, "My ego isn't big enough, and my children aren't old enough."

That said, he would be one of the first, if not the first, House representative elected to be POTUS. Governors, senators, other military leaders, admin. executives all have won, but not a sitting member of the House of Representatives. But there is always a first!! (I personally would prefer Allen West, but he also is stating unequivocally that he is not running.)

Regardless, Paul Ryan would be an excellent candidate, an excellent POTUS. He is truly an anti-Obama. He's a true Conservative, social, fiscal, and Constitutional.

I would gladly vote for Paul Ryan, if he chose to run and was nominated.

Not making any hyperbolic comparisons, but, if memory serves me correctly, wasn't Abraham Lincoln's only elected office prior to being elected POTUS one term in the House of Representatives? (I can't remember if AL had any state wide electoral positions.)

I would be thrilled to vote for Ryan as President. At the Deficit Reduction Bipartisan White House Summit, Ryan had the cajones to quote the Senate Budget Committee Chairman, and say directly to Obama in front of the cameras, "This is a Ponzi scheme that would make Bernie Madoff proud." Ryan isn't afraid to "take it" to Obama.

Better than any known alternative of (R) or (D) persuasion except the Governor of Texas.

As far as I can tell, the only president to have been elected while serving in the House of Representatives was James Garfield. Plenty of presidents have served in the house at some point prior to becoming president, and one even served afterwards (JQ Adams). U.S. Congressmen normally do not have the national profile to win a national election. That being said, I would vote for Ryan in a heartbeat, if he were to show up in the GOP Primary.