Via The Muqata comes the video below of the Israeli Iron Dome system taking down a Kassam rocket fired from Gaza.

The technology is not perfect, but it has taken down numerous Hamas rockets in the past few days:

The success of the Iron Dome missile defense system so far – eight interceptions including the system’s first one on Thursday night – has surprised even the air defense troops who have been training to operate the device for several months. Two batteries have been deployed thus far, one north of Be’er Sheva two weeks ago and one near Ashkelon last week.

While most of the media attention has been given to the visible interceptions made over Gaza, the system actually clicks into action automatically when any projectile is launched from Gaza toward Israel. The commanders of the Iron Dome batteries were therefore faced with making dozens of real-time decisions on whether or not to fire an intercepting missile.

And us? Missile defense is a fool’s errand, right?  Star Wars, and all that, right?

Update: Via Yaakov Lozowick comes this photo of a missile being fired from a built up area of Gaza: 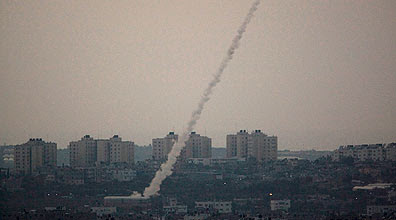 If Israel were to return fire to the source using the same type of inaccurate rockets fired by Hamas, Israel would be accused of a war crime by the U.N. Human Rights Council and a wide range of “human rights” NGOs and academics.  In fact it is Hamas (just like Hezbollah in Lebanon) which commits the war crime by using civilians as human shields.

There is no effective remedy other than airstrikes which are more precise than return artillery fire.

So, of course, the Arab League wants the U.N. to impose a no-fly zone over Gaza.

It's only a fool's errand if we keep listening to the fools that say it is —i.e. Liberal/Leftist/Communist Pre-Dhimmi Anti-American self-loathing cowards.

This goes double for those that keep saying that drilling won't help high gas pump prices.

Since they've been saying that and preventing drilling for twenty years, we've allowed their words to come true.

Now that is deserving of a Peace Prize.

Reagan used to be mocked as a fool for believing that it was possible to "hit a fired bullet out of the air with another bullet". It was never impossible. It's just another engineering challenge that can be solved by trying, analyzing, recalibrating, re-trying, re-analyzing, recalibrating over and over again until you can hit the target consistently. It was mostly an issue of cost and time.

Now we are considering sharing the "red button" to our missile defense shield with our enemies the Russians? Who is handling THAT negotiation? John Boehner?

Eight? Since Thursday? We take so much for granted here in the States.

To give even more context – Iron Dome has intercepted 8 missiles since Thursday (possibly more by now). But over 120 missiles in all have actually been shot at Israel over the weekend – again, more have been fired today (Sunday).

I love the way the Israelis don't muck about when it comes to their own survival. So many western societies seem intent on suicide. Better dead than offensively self-preserving, eh?

The question now is the next step Hamas takes. If their rockets are rendered obsolete, will they go nuclear? Yes, that's right … I'm talking about the ultimate weapon in their arsenal. It's beyond chemical weapons of the dirtiest kind in inducing incapacitating nausea:

Its agents are sinister. Its men make Richard Simmons doing calisthenics in dolphin shorts look like an exercise in atomic macho masculinity. Its women … well, all the allure of Phil Spector on a bad rug day.

Carol: "Eight? Since Thursday?"
I'm with Sarah Palin on this one. Stop apologizing. When there are incoming rockets then respond with outgoing artillery or bombs.

Why we (and the UN and NATO) intervened in Libya

"So, of course, the Arab League wants the U.N. to impose a no-fly zone over Gaza."

No need to worry. With the accuracy displayed by those Israeli missiles, it shouldn't be a problem clearing the skies of those pesky flies. Of course, it would be better if they just washed their camels once in a while. Bathing would help too.

That picture is worth a thousand words. I had a lefty tell me one time that these rockets were no big deal … that there were seldom any fatalities.

He wouldn't be aiming, it wouldn't be accurate, the guy across the street probably wouldn't be out in his front yard walking to his car at the time. 99/100 or 999/1,000 times no problem.

But how would you want to live with that inaccurate threat every time you ventured out into your front yard? Would you be all that surprised if you or your children were hit one day?

Speaking of danger, it can be a little dangerous coming up with an analogy on the spot … but it did the trick. He couldn't really answer.

It's obvious from the picture these are not just little more than large skyrockets or something a hobbyist would shoot off on the weekend. That picture shows just how serious these things are.

Unfortunately, it is quite possible Israel will run out of rockets before the ratbags. Especially, if a UN arms embargo is enacted.

"So, of course, the Arab League wants the U.N. to impose a no-fly zone over Gaza."

The Palestinians have US friends at the UN and the White House. This could get through with a US abstension before Congress has a chance to prevent it.

As can a vote to recognize Palestine and Gaza.