According to the Wisconsin GAB website, an “estimated” 18,300 signatures were filed, far in excess of the 13,537 needed to require a recall election.

As reported by JSOnline, Democrats already are attacking the Recall Wirch petitions and those filed today against two other Democratic Senators:

And the Democratic Party has already issued a response to those filings, casting doubt on the signatures being offered today.

In a conference call with reporters Thursday morning, Democratic Party of Wisconsin Chair Mike Tate ripped what he called the “sloppy, disorganized, dispirited and fraudulent efforts of the Republican recall racket,” and he and party counsel Jeremy Levinson said they’d challenge signatures after they’ve been filed. Tate claimed one person offered shots at a tavern in return for signatures to recall Wirch, and Tate repeated the story of a paid canvasser in Green Bay — a Colorado man with a felony record — who was accused of theft while he was gathering signatures against Hansen at Lambeau Field.

(In the interest of balance, Republicans have been complaining recently of a break-in at Hansen recall headquarters, in which petitions with 150 signatures were stolen. Tate condemned the breakin in an interview Wednesday.)

The three Democratic senators will have 10 days to challenge the petitions after they’re filed. The GAB has 31 days to certify the signatures and schedule elections, though officials there are saying they plan to ask the courts for an extension of that time.

Updates:  Here are photos of Recall Wirch packing and then filing its petitions this morning: 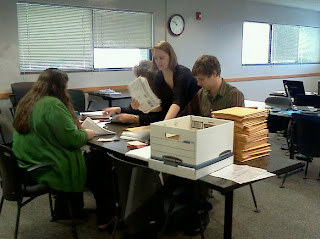 Has there been any news about the stolen 15,000 signatures collected to recall fleebagger Senator Dave Hansen (WI)?

@kitty – the stolen Hansen sigs were not that many, low 100s. Hansen recall group filed about 5k more signatures than needed this morning, http://gab.wi.gov/node/1669

I'm made of rubber and you're made of glue:
Everything you say to me bounces off and sticks to you.

That is about how intelligent this bickering is. Although, somebody did break into an office collecting signatures to recall a Democrat. I did look at the first 100 pages of the recall petition for one Republican Senator. Very few of the pages had 10 signatures with addresses. So, not only do the signatures need to be challenged, but they need to be counted. This is the sort of thing that could be farmed out across the Internet. Organized groups could divide up the pages, and check names to see if there is information matching them to the given address. Or, if their name is on a database for government employee.

I don't live in Wisconsin and maybe there are, but I should think, and hope, that there would be recall petitions against ALL the Democratic senators who fled the state. I can't think of a better reason to unseat a legislator.

Capn, officeholders have to have been in office at least one year before a recall can be held, so, for example, Walker can't be recalled at this time. That may well hold for some of the fleebaggers as well. I understand there are petitions out for 8 of the 14.

I'm uploading video from the Recall Presser today. In the meantime, here are a few fun pics of some rejected recall petitions.

"Keep your Koch crap out of my mailbox" http://twitpic.com/4nv3hb

I have no idea why the video is rotated. My apologies. I'll try and fix it later. This is just a small segment from the Presser. I do not have the entirety.