Prosser Now In The Lead

Prosser Now In The Lead

A tally compiled by The Associated Press Wednesday and used by news organizations statewide, including the Journal Sentinel, indicated Kloppenburg was leading the race by 204 votes. Figures on Winnebago County’s website are now different from those collected by the AP.

The new numbers would give Prosser 244 more votes, or a 40-vote lead statewide.

AP is trying to confirm with the county clerk.

(h/t to reader Robert for the link)
Update:  It is way, way, way too early for us to celebrate, and there will be a recount regardless, but how good would it be if this became the Dewey Defeats Truman of our time? 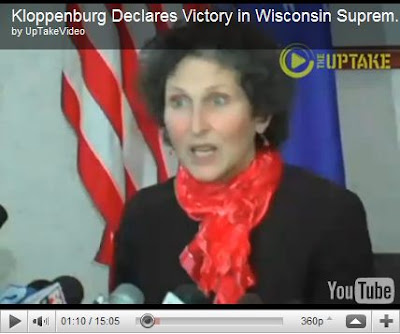 More Updates:  WisPolitics.com Election Blog is following the clerks tallies, as of now (4:04 CT) Prosser still is in the lead.  He was up over 100 at one point, but both sides have gained/lost votes in various counties.

Go to Lakeshore Laments for the latest.  I will not be able to update until later (unless I can figure out how to do it from a PDA).  “Round 2” tonight.

Readers are emailing that there will be a game changing announcement that Prosser picked up over 7000 votes due to a computer error that was discovered.

A post on the election, many Wisconsinites amongst the commenters.
http://althouse.blogspot.com/2011/04/dont-talk-about-fraud-fraud-there-is-no.html

No thanks, Dewey defeats Truman is easier on the eyes.

i just can't help but laugh at the fact that all of this is in Winnebago county.

RV's to the rescue!

"RVs to the rescue!" Republican votes.

When we get done with the Mamas and Papas, perhaps consider some vids for the group Love.
They were on the scene so early that they copped the name….think about that!
And the music is terrific, for example basically anything from the album "Forever Changes" can be recommended without reservation.
http://www.youtube.com/results?search_query=love+arthur+lee&aq;=f

I'm becoming weary of and aggravated by this dem strategy of declaring something to be true before it is. Obama does this constantly, most recently by announcing a deal with the GOP when there was none, but he does this as a matter of foreign "policy," as well. He says it, and then whomever he's boxing in (Boehner's term) is expected to comply to make it true . . . retroactively. Grrr.

Doyle Lonnegan recently showed up at the WI Democrat HQs, "Whadda we suppos' to do, accuse them of cheatin' better than us!"

1. That image of Kloppenburg looks familiar!

2. Hopefully Prosser will squeak through. I still maintain that the Right did not take this election seriously enough, and that Walker failed to sound the alarm.

3. To repeat, who oversees the recount is critical.

Quietly hoping that Prosser prevails, and the Cheeseheads answer to Tammany Hall does not.

That said, via Lew Rockwell's blog, this is next up on my reading list:

"Plunder: How Public Employee Unions are Raiding Treasuries, Controlling Our Lives and Bankrupting the Nation", by Steven Greenhut, (former editor and columnist for the Orange County Register for over a decade).

Twitter is abuzz with the news that due to a computer error, Prosser is gaining 7,381 votes. http://www.nationalreview.com/corner/264209/breaking-computer-error-could-give-prosser-7381-more-votes-victory-christian-schneider
A press conference is coming soon.

Apparently, I do live in the country I thought I did.

Oh the sweet, sweet liberal tears are flowing. I hope it lasts. I'll enjoy it for now, just in case.

I appreciate all the commenters who have been keeping up with this and letting us know what they find.

If I might add, from the press conference: The Waukesha County canvassing was observed and vouched for by representatives from both political parties. The error was discovered yesterday morning when the votes were being entered into the state system. Yesterday and today were spent canvassing the county to confirm all votes cast in Waukesha County. The Democrat representative spoke at the press conference and validated the final results. Beyond the numbers I posted above there were also some other minor deductions in votes for both candidates discovered during the canvassing, but they did not state the actual deduction number during the press conference. They seemed to indicate it was a matter of about 100 votes deduction each or so. These new totals are now officially entered into the Wisconsin state system and cannot be changed except by the State of Wisconsin. I thought the people at the press conference seemed to display both strength and integrity in what must be a very difficult situation.

So after the ad nauseum comments about the assumed (with no proof) vote fraud by the left the right now finds 7000 votes on a personal computer? I have to wonder if it had been 7000 found votes for the lefty candidate if you wouldn't all be howling with indignation right now about how obviously fake they were. ActuallyIi don't have to wonder since there was lots of preemptive outrage at the ballots that were going to be found.

The only thing to wonder about is if a few of you don;t have enough moral fiber to be a little ashamed of yourselves right now.

I'm not surprised at all (see my comments posted yesterday). What is constantly annoying is the way that election night reported numbers are taken to be some sort of gospel once "100 percent of precincts reporting," when election night numbers ARE NEVER ACCURATE, much less "final" as even the Professor labelled them. They always change when official counting starts, although it almost never matters unless the race is extremely close so we never even notice that nearly every county or city winds up with official certified numbers that differ from the election night numbers. The latter are, after all, swept up by polling officials who all want to get home and who realize that their "counting" is NOT an official canvass but merely a way to let the news media report. People at polling places tote ballots up and usually phone the info to other people the next step up who aggregate them with others and pass them the next step up the chain, again usually by telephone. At the top, people like this hapless city clerk phone AP with their totals.

This case is a perfecf example of what is bound to happen. It was not a "computer error" but the clerk's error in simply not including one set if numbers in the totals she passed along to the AP. What is less usual — but far from rare — is that she left out a big chunk.

Tiolac — votes were not "found on a personal computer." The county clerk failed to include ANY results from a whole city in the total she gave to AP. The election night totalling is purely preliminary, non-official and conducted solely to satisfy the media. Mistakes of this kind happen all the time, but you never notice them days or weeks after an election because few elections are so close. It is not in any way the same as ballots disputed by candidates locked in a recount fight. There will not even be a recount in this case.

I think you should put away your faux indignation and accept the reality of an error committed by an imcompetent government employee with a track record of slipshod work.

Sorry it didn't break your way. Should I cry a little more for ya?

Hey, Tlaloc, you don't read to well. The Democratic Party already validated this outcome during the canvas. They were observers at the canvas and the deliberations and voiced support for this outcome at the press conference.

Meanwhile Tlaloc ignores this paragraph in the article:

Would you like some brie with that whine, Tlaloc?

Tlaloc – if the ballots are in question, recount them. Or are you suggesting that a city should be disenfranchised because its votes were not included in an unofficial tally?

At the press conference with Nickolaus, Ramona Kitzinger, the Democrat on the Waukesha County board of canvass said: "We went over everything and made sure all the numbers jibed up and they did. Those numbers jibed up and we're satisfied they're correct."
http://www.jsonline.com/news/statepolitics/119410124.html

As far as "moral fiber" goes, I'll admit that part of me kind of would like to hear that these numbers were not reported in an effort to mislead Democrats as to the number of votes they'd have to manufacture to steal the election… but NO part of me supports falsifying votes.

And silly me, I thought we were toast last night. I forget to listen for the fat lady singing.

Did any of you even rad what I wrote? I never contested the found votes. So far I've seen no indication they were anything but real votes that should be included int he final (regardless of which candidate that helps).

What I did do was point out what huge hypocrits you are for all your asinine claims that the left would cheat (without proof) and meanwhile when a strange event comes up that you would crucify the left for you accept it without pause because it helps your preferred candidate.

Your regard for democracy is a mile wide and a nanometer deep. As before you should be ashamed of yourselves.

And congratulations to Prosser on his apparent victory.

I lived in Waukesha County for eight years and attended a primary school back in the last century in Brookfield, so I feel personal participation in the joy of seeing the corrupt unions and their mendacious skank Kloppenburg overcome in and by my old stomping grounds.

This is all the sweeter because the female in the race vaunted her victory before the final count was in!

tlaloc,
"asinine claims that the left would cheat"
The best indicator of future behavior is past behavior and the history of cheating is legendary in the democrat party. Have you never heard of Acorn? Cook County, Illinois, 5,000 illegal alien votes in Colorado, more votes cast in Milwqukee than voters at the poles, new York students voting im Wisconsin for Obama, Democrat relatives in Milwaukee slashing tires to prevent companies from taking people to the polls, The New Black Panther party intimidating voters, Missouri Dems convicted of voter fraud, and on and on. I'd say your statement was the one that was asinine.

I was in Waukesha County two years ago and even though i i am not there anymore, i feel really good for Prosser.