MSM Doesn’t Have Haley Barbour To Kick Around Anymore

MSM Doesn’t Have Haley Barbour To Kick Around Anymore

Impecable timing and sources, that’s what makes Newsweek a powerhouse in the news business: 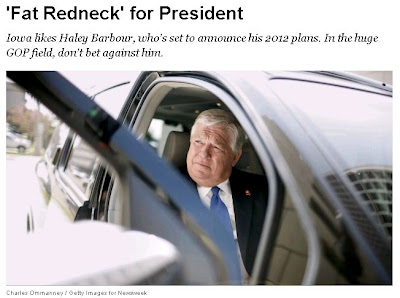 But all jokes aside, this was a bad day for the MSM.  Oh how they wanted Republicans to nominate someone from Mississippi with a heavy southern accent.

Sorry, you’ll have to find some other Republilcan to kick around.  I don’t think you’ll have much trouble finding one.

I like the Governor, he did a reasonable good job after Katrina. I think he could have done more but compared to our own Governor Blanco he was a symbol of someone who was in control.

There's no way a white man from Mississippi can ever win as POTUS.

The MSM had already geared up for the oh-so-predictable Southern White Male (read: raaacist) vs. First Black President (read: the Immaculated One, who plays the race card early and often). Too bad for you, MSM – I feel so sorry for you (not!).

That would have been an easy propaganda campaign for the OFA Democrats. Too bad that is the Democrats' history…..oh, yeah, they erased that by 1972. After all that flower power and anti-war stuff, Nixon, etc. they began the co-opting of the Dem party and re-writing its dirty, racist past.

There are lots of governors who could do a great job as president. There are lots of leaders who are ready, willing, and able to take on the seemingly insurmountable challenge of taking on the Obama-Chicago machine.

But who would survive such a fight? Who could endure all the vileness they will spew, and fire back with integrity, truth, and Conservative principles? Is there anyone who could beat Obama, and his well-oiled machine?

I hope so. I believe there is. And I will support whoever is nominated, in order to ensure that this ObaMination is a 1-term president.

Oh, and BTW – when I first saw the picture I thought it was William Shatner! "Captain Kirk" would be a better president than Obama, hands down!! No question!!

(Of course, I know Shatner is from Canada, not eligible or interested, and not even under consideration…….)

Just sayin' – it looks like him, with white hair.

It's unfortunate that bigotry against fat rednecks is considered acceptable.

I couldn't believe a responsible news organization would headline a story about a respected Governor "Fat Redneck". I had to check the link for myself.

Then I saw it was Newsweak, which lost the responsible news organization tag quite some time ago.

Newsweek, so predictable, so Jon Meachum, so Fareed Zakaria. So out of money and readership.

The 'Fat Redneck' tag is something initiated by Gov. Barbour himself.

"There's no way a white man from Mississippi can ever win as POTUS."

Such is the bigotry of the self-proclaimed "elite".

I resent the fact that we tend to allow dems and their media friends to influence our nominee selection. Pretend for a moment that Barbour was right on all the issues and was aggressive enough to fight for what we conservatives believe in (a rare enough quality in Washington these days). I would expect these attacks from the media on him. What would depress and demoralize me would be other conservatives saying "No, we can't run this Fat Redneck, that's just what they want us to do!". We let the media select our 2008 nominee, see how far that got us.

In the end, they'll trash us to no end, either way. That's the perfect reason to ignore their attacks and do what we know is right.