Fortunately We Have Not Yet Hit $4 per Gallon Gas

Fortunately We Have Not Yet Hit $4 per Gallon Gas 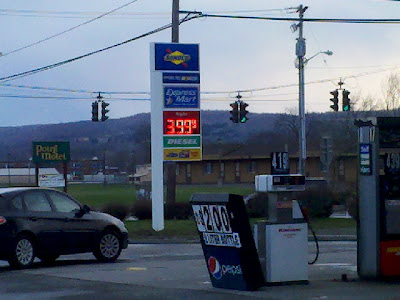 And we we should give further thanks that the current President of the United States understands the forces which come together in what we sometimes call “markets.”

Because if we had as President someone less highly credentialed, less schooled in economic theory, someone who moved from college to college before getting a degree from a state school, we might not have the benefit of Obama’s wisdom that limiting domestic drilling was the answer to our energy needs.  That, and windmills.

Instead, we’d get the absurd view that we should increase domestic supply while testing as yet unproven technologies and alternatives:

What's to understand? Why would we possibly want to increase our own plentiful domestic energy? I mean, the unproven benefits of solar and wind power are as certain as, oh…the "proven fact" (you know how I hate that term) that there will be hundreds of millions of "climate refugees" by 2010. What? 2010 is passed and there is no indication there are climate refugees? Oh. Never mind.

I think I topped off my tank there the last time I was home for Christmas. No where close to $4 then. We're at $3.60 ish where I live and I'm going to get my bike tuned up and start riding at $3.75. I can use the exercise.

I live in Los Angeles County (San Fernando Valley) and we've long since hit way over 4 dollars per gallon.

This is especially sad since so very many people must commute long distances to their jobs (on freeways that double as parking lots).

The first time I noticed the beginning of this obscene traffic was on a Saturday in 1984 when I thought: "Wow! This is just like rush hour." Little did I know that I had not seen anything compared to what it is now…

(As for wind farms keeping the price of gas low, we have four huge wind farms twelve to twenty miles to our south. They have not helped us with gas prices, but the landowners love the rent that they generate.) See

Seattle's had $4 gas for a while. (can find cheaper, if you know how, but there's more that have all grades well into $4.)

I typically don’t believe the energy market can be manipulated, however, I’m beginning to wonder, to the extent that it can be done, if gas prices may not kept artificially high until AFTER the next presidential election.

Think about it. Obama and the Democrats have truly been sticking it to the oil industry, in every possible underhanded way they could, since they got into the Whitehouse. Energy independence is not a bad concept and phasing out fossil fuel is not a bad idea, but we cannot run our vehicles on concepts and ideas. We need fossil fuels for energy, pharmaceuticals and plastics for the foreseeable future. When we have something else, THEN we can phase out what we have now, NOT before.

So, think about this for a minute – how can the oil industry stick it back to Obama? If they can keep gas prices artificially high, Obama will surely be toast in 2012. If you were in their shoes, what would you do?

Just to join the choir, we in NorCal have greater-than-$4 gas.
I filled up this week for $4.23/gal.
Regular.
At CostCo.

Otherwise, it would've been more.

Well, if the oil companies are the only people who can get this asshole out of office, then more power to them because, as much pain as it causes now, nothing would compare to what's coming under a soviet-style dictatorship (and one of Obama's most recent 'executive orders' regarding his Czars simply thumbs his nose at our consitution which tells you what his intentions towards our country are). David Limbaugh's Crimes Against Liberty already documented hundreds of such activities.

Well, for starters, Obama is probably going to accuse them of that no matter what– and will use the new political inJustice Department to "investigate."

So they'd have to be incredibly stupid to actually try to fix the market.

Additionally, most of the oil companies probably don't give a flying flip– it's the Americans drilling that care. (Pretty sure that South American company Soros invested in is just delighted to have less competition.)

When Sarah Palin said in WI this past weekend that gas prices climbing to $4 and $5 a gallon, along with increased food prices, were fueling American's against Obama's agenda, she was spot-on!

I remember when she said in a speech that inflation was on the rise……and the Regime (using the MSM propaganda arm) tried the stupid meme: "Hahaha, there's no rising infation!" She, of course, was right – again. How will they try to smear her speech this time – stupid-meme, misquote, or just ignore her…..? News to the clueless – it's not working!

You see, the more she speaks, the more facts and truth she states – and the public hears, the better Americans and America will be.

Palin for President! If she runs – whether she wins or not – the debate and dialog will stay on point as to what REALLY matters.

She is one smart lady. Brave, bold, brassy. With cojones, and a steel spine.

I don't believe anyone in the oil and gas industry is currently shaking in their boots worrying about Holder’s DOJ initiating an investigation. First, that would require a great deal of competence and diligence and neither of those attributes seem to be very abundant at the DOJ. By the time they got to the point of taking depositions, Obama would be long gone. Second, if you know about the oil and gas industry, people there aren’t exactly prone to holding formal meetings and then subsequently publishing the minutes.

As much as the high price of gas is hurting our economy, I concur with the above sentiment which in effect says, if that’s what it takes to get them out – then I’ll gladly pay it. I would rather give my money to the oil and gas industry then to the RNC.

to repeat a bad joke, that is less funny by the day:

He will require it to be sold in quarts.