For Those Who Love The Stimulus, Let Them Come to Warren, Rhode Island

For Those Who Love The Stimulus, Let Them Come to Warren, Rhode Island 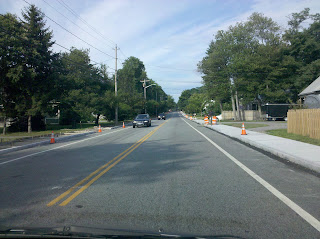 Last July I reported on the absurdity of federal Stimulus Plan money going to building miles of new sidewalks in Warren, Rhode Island, in areas where few people walked.

Last November, I reported on the fact that the unnecessary new sidewalks were built improperly.

Now I can report that fixing the unnecessary improperly built sidewalks has created a budget problem with various entities fighting over who should pay to fix the problem:

Seven months after the completion of a botched $1.99 million road re-paving job on Child Street, DOT officials still haven’t determined the best way to repair the busy stretch of road. There’s also no clear determination yet as to who will pay for the work.

On Monday, DOT’s deputy chief engineer, Frank Corrao, said he hopes DOT will put repairs to sections of the roadway, curbs and sidewalks on the construction schedule for 2011. He expects that will happen, he said, but can’t guarantee it.

Those improvements are sorely needed, say some town officials, legislators and business owners along the busy road. The sidewalks are six inches tall in some spots and less than an inch in others, especially around Cutler Street to Arlington Avenue.

I’m still waiting for a politician to stand on the sidewalk in Warren, Rhode Island, and deliver this speech:

There are many people in the world who really don’t understand, or say they don’t, what is the great issue between the free market world and the Stimulus world.  Let them come to Warren, Rhode Island.

There are some who say that Stimulus is the wave of the future.  Let them come to Warren, Rhode Island.

And there are some who say in Washington, D.C. and elsewhere we can create work with the Stimulus. Let them come to Warren, Rhode Island.

I'm going to guess these sidewalks were never needed to start with, were installed to use up our tax money and keep union labor and some cement companies busy, right? If my private company put in the things wrong, wouldn't I have to fix them and eat the profit.

I just don't see what the problem is here, aren't they willing to correct their mistake? Don't they need to keep the customers satisfied? What kind of business would walk away from shoddy work, isn't the union PROUD of their job?