The Citizens United case weighs very, very heavily on their minds and their bumpers. 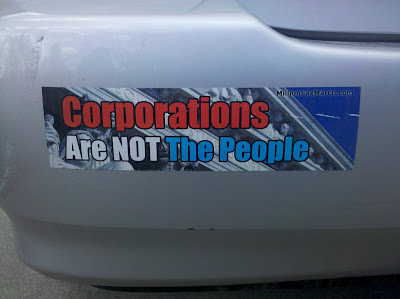 I got one bumper sticker printing press churning out "Corporations Are People, Too!"

I'm just about to put the "Have you hugged a job-providing corporation yet today??" plate on the other press.

I'll have Joe crank up the speed a bit.

Do a 'whois' on 'peaceteam_dot_net' and you will _not_ get any specific contact info for whoever is behind this bumpersticker?   I.e., the address listed in the 'whois' results is for the Domain Registrar in Florida.   Cowards!
.

Why, they're groups of the people.

Having said that, look how big Pharma, the AMA and AARP keep giving CPR to Obamacare, and how Obama's WH is repainted in Wall St red and powered by GE. Are anti-corporate left-libs grossly uninformed or just corrupt?

'Groups of people' with amassed resources for the purpose of increasing return on investment isn't the same thing as a group of people with shared political interest. Obviously.

If you post links to information that makes you conclude the WH is a corporate tool… I'll read it. I am very interested.

Politics often are about securing personal benefit/s, breaks, subsidies, relief, welfare and profit for individuals and groups of The People. Obviously.

Equally obvious is that policy is often formulated to discourage some industrial sectors over favored business interests, such as US offshore drilling permits being inhibited while American dollars get loaned to Soros- invested Petrobras in Brazil and Federal funds allocated to universities and corporations doing the green thing.

And, yeah, Obama is a corporatist (and socialist- both statist.) There are numerous accounts of the unhealthy monies flowing from major corps and Wall Street to Obama and other Dem campaign coffers, reciprocated with access, influence and concessions. Here's one:

The recent White House personnel shifts signal the kickoff of President Obama’s 2012 re-election bid. Of the many changes, the selection of Bill Daley as White House chief of staff and General Electric CEO Jeff Immelt as the head of the President's Council on Jobs and Competitiveness are the most important because they will play a key fundraising role in the upcoming presidential campaign.

Choosing Daley and Immelt are not signs of political moderation by President Obama, as some have suggested, but is the stone cold political realization that the president needs big-business cash to fuel his 2012 campaign.

Taken straight up, no spin, the bumper sticker is factually correct.

1/ People do not live in perpetuity like a corporation can.
2/ People are taxed on the basis of domicile. Corporations of the Fortune 50k, generally incorporate in Del and are treated and taxed accordingly regardless of where they are headquartered.
3/ Corporations generally collect sales taxes, people pay them. Not to say corps don't pay sales taxes, they do.

The list of the differences is long. I am sure that the vehicle owner has a different political intent in mind. But at one level the bumper sticker is right.

And what about taxation for non-profits, PACs, NGOs, teacher and other unions, special interest advocacy groups, and even churches?

runic– I'll read the stuff you linked to. Your point re: industries is correct. I wonder if anyone has come up with a model that would direct public funds to the places that are in the greatest national interest. I don't believe engaging more of corporate coffers is going to do this– I do believe it will corrupt a corrupt system even further. And let's face it, the Citizen's United (extended) decision was a slap in the face to every American citizen. But that said, I will read the stuff you linked to and find out what I can about the other.

RE: the sales tax? I think there should be one sales tax– across the board, every institution and person pays it. It's just part of the cost of doing business. And here in Iowa, I was actually emailed by at least one church that was OPENLY campaigning against the judges who had decided in favor of gay marriage. I went to the IRS site to see if there was a place to report something like this. 20-30 minutes and I couldn't find anything. An aside.

OK Laurie, I'm curious. What exactly did the Citizen's United decision say? Tell me, please, so I can understand how it was a "slap in my face".

WasDave–Justice Stevens dissent was based in law, and made all kinds of sense to me, but my fundamental objection is common sense.

Corporations are legal constructs that are not directly accountable to the people who own it or the people employed by it. Because of this, rights bestowed on the construct are not an extension acknowledgement of the rights of the citizens who might own stock (and run the obvious risk of overriding the will of these actual citizens to protect the only-monetary interests of non-citizens, the holdings of other corporate entities, and so on). Unlike persons, the corporation is a construct with a narrowly defined purpose and the potential for perpetual being. It will never be burdened or wizened by the knowledge of its own mortality.
That last is the slap in the face.

When has /Separation of Church and State/ meant /Separation of Observable Reality and State/. To date, mortality is the one thing every human being has had in common. It is our fundamental and shared context. And it's been the ground upon which all
meaning and civil agreements have been forged. If you'll never die, who cares if you make a U-turn in front of on-coming cars. If you don't die, who cares if you destroy the gulf coast because it gives you a short term competitive advantage. Building civilization has been in the shared interest of human beings because they shared this one thing– mortality.

This very physical vulnerability is the ground on which life, liberty, and the pursuit of happiness and all the rest has meaning. No matter how you acknowledge it and whatever you think does or doesn't come next, it's the human bottom line. Corporate constructs have another… bottom line. It's as simple as that. To call them persons is an insult to those of us who bleed and have evolved empathy on account of this.

And yet "The People" form Corporations!

(Isn't there something about the right to peaceably assemble?)

"'Groups of people' with amassed resources for the purpose of increasing return on investment isn't the same thing as a group of people with shared political interest. Obviously."

Not obvious at all. Explain it.

If my condominium association petitions the township for something — say a new stop sign, or a traffic light at the entrance to our development, or even to be handed ownership of our roads so we can "gate" the community — are we a group of people united for a financial interest or for a political interest?

If a group of publishers petition against a law they feel would amount to prior restraint and an undue burden on their business, are they a group of people united for financial interest or for a political interest?

Is there really a difference? I'd say not, particularly when so many people insist on using the government to enforce/create financial advantages for themselves.

"Unlike persons, the corporation is a construct with a narrowly defined purpose and the potential for perpetual being. It will never be burdened or wizened by the knowledge of its own mortality.
That last is the slap in the face. "

That makes absolutely no sense. A corporation doesn't "know" anything, as it's simply a collection of people.

I think you're babbling nonsense, Laurie, not common sense. Corporations are made of people. Citizens United simply extends political rights to groups that happen to be PRIMARILY organized around a business interest.

You didn't answer the question. Corporate personhood is a concept that goes at least as far back as 1886 with Santa Clara County v. Southern Pacific Railroad Company. It's a fair topic for discussion, but it's established legal precedent.What is it about this case that is a slap in my face. You haven't answered that, you've just demagogued corporations.

How was it a slap in the face? The Court 'revisited' precedent to establish that corporate identity is irrelevant. But, corporations are not 'associations of people,' anymore than people who drink Diet Coke is an association of people. Stockholders buy a risk/benefit position. They don't participate in decision making except whether or not to buy. A stockholder is not consulted on how ROI is applied to support a candidate and their election unless the stockholder is on the Board of Directors or has the Board's ear.

So what we are really talking about is the freedom of a profit-making entity to affect policy for greater profit making, uninformed by conscience or human vulnerability except perhaps that of the Directors and large holders. And the latter express their human view in the formation of speech bankrolled by the ROI on the holdings of smaller, speech-less, stockholders. This corporate speech may or may not reflect the speech preferences of these small holders. A gay investor with money in Target would unlikely choose to support Michelle Bachmann, for example; and yet, Target directed money to a fund that supports Bachmann. Most, if not all, candidates have social as well as economic agendas, making it impossible for a corporation to fully and accurately speak for all stockholders. Stockholders would have to be consulted. That doesn't happen. Except in the case of large stockholders or directors.

Because corporate identity is irrelevant, so in effect is the national allegiance motivating the political speech. The nationality, national allegiance, etc. of influential large investor is behind a corporate veil: C corp is funded by Y corp. And who knows who owns Y corp. Or, perhaps we are talking about a DE corp that keeps profits out of the US to avoid taxes. As with the largest "American" corporation, General Electric. Be assured, their speech is protected.

Corporate speech, motivated by agendas that run contrary or even threaten our national interest or (far worse) by human-indifferent interests, is now able to weigh in to the last minute and with a flood of money. And, at the expense of that gay American with Target stock. Why? Because we are protected as market actors first and as citizens second. Finally, it is official: The protections of the United States are first in the service of capitalism and consumerism.

The slap: I'd be taught and even believed that American citizenship was a stake in something more sublime. Maybe you didn't have that to lose.