Another Day, Another Nonsense PPP Poll

Another Day, Another Nonsense PPP Poll

If you have not realized it by now, Public Policy Polling — which works for DailyKos — has become an important part of the left-wing messaging machine, with a relentless series of polls spun as bad news for Republicans since the November 2010 elections, and gimmicks (such as polling Charlie Sheen, or only Republicans in Mississippi) designed to generate headlines.

In early March 2011, PPP predicted the demise of Republicans in Wisconsin, purporting to show that Gov. Scott Walker would lose by seven points if the election were held again, based on data which was skewed in favor of Democrats relative to the actual vote in 2010.  The Prosser-Kloppenburg Wisconsin Supreme Court election, which served as a proxy for Gov. Walker’s popularity, was evenly split, proving PPP was far off the mark in measuring a large shift in Wisconsin.

Now PPP is up to it again, with a new poll which is generating a lot of attention, purporting to show that Republicans likely would lose the House and had dropped in popularity.  Here is how PPP spins the poll, Bad News For Congressional Republicans:

PPP’s newest national poll finds that after a little more than 3 months in charge House Republicans have fallen so far out of favor with the American public that it’s entirely possible Democrats could take control of the House back next year.

But once again, PPP uses a seriously skewed sample weighted in favor of Democrats. 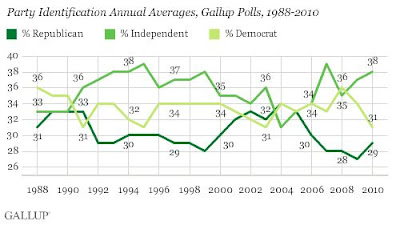 Gallup’s recent party identification analysis by state shows an even worse situation for Democrats, with the number of solidly Democratic states declining from 2008 (30) to 2010 (14).

The PPP poll which purports to show a shift away from Republicans uses a sample which overweights Democrats both relative to Republicans and relative to the total voting population.

Keep an eye on PPP.

This is good advice.
Note the projection: Leftists says Rasmussen skews polls for political purposes. Actually, PPP does this and Rasmussen has an excellent track record in terms of results.
Also, note the skew for independents. Perhaps a lot of IND voters are ill-informed American Idol viewers but a lot of them are ex-Repubs who have given up on support for RINOs.

The sad thing? I only declare myself Republican to spare Democrats the comfort of saying "Independent." But at this point I would gladly vote third party if the candidate was strong enough.

Well, the Kraken needs to pick up a friend at the airport, but here is a quick look.

The partisan breakdown shows 7 points more Dems and 5 points more GOPs than the year-end Gallup numbers, with these losses coming from indies. This 2 point difference, assuming similar party loyalty and indies who don't skew significantly GOP, won't chance the poll's substantive result that the Dems are leading the generic congressional ballot. The generic ballot question was asked first, so there is no possibility of priming or other question-order contamination.

The party skew also does not explain the fact that the Dems are leading by 9 among indies. However, the sample size, at 532 (including 149 or so independents), is small, so it is possible that this number is bad. The handy ARG calculators show that the MOE for indies is 8%, and the probability of the Dems leading the generic ballot among indies is 87%.

There are a couple questionable aspects to the poll, however. The better off question is odd, and while I don't know exactly what bias it might introduce, skepticism is always warranted when partisan firms include odd questions. Also, one should avoid comparing presidents to Congress, because Congress is always unpopular. Instead, one should compare them to challengers (either specific people, a generic opponent, or a party opponent) or to the opposing party. The way they worded that question risks bias in Obama's favor.

The poll was also timed very well for Democrats. It was done on Thursday through Sunday. Thursday and Friday, the GOP lost control of the message on the budget and the narrative became about shutting down the government to limit abortion. With that in the news, the GOP would be expected to take a temporary dive. Furthermore, the conventional wisdom is that Dems do better on weekends, although I'm not sure that is backed by science. Even still, news takes a few days to fully hit the people, so this poll will be significantly influenced by government shutdown thought and probably coincides reasonably well with the brief period during which the Dems controlled the narrative.

I cant rule out that there is other shadiness going on, but there is no evidence for it either. The best course of action is to keep an eye out for other generic ballot polls to see if their results are solid or a fluke of the sample or the days polled. If true, however, they are in fact bad news.

But… but… figures don't lie!

Liars, however, DO figure.

Polls schmoles…the Dhimmicrats are toast. The word is out that the country is bankrupt because President Snow Job and his Fat Wookie Wife and Val "Dont Call me Dat" Jarret have spent more money in twenty four months than all presidential admins since George Washington through GWB combined. It is over. The sleeping giant is awakening. Sharia is next! Hold onto your hat Mohammed.