Court proceedings in Madison before Judge Maryann Sumi center on whether the budget repair bill has become law.  This is, as I posted before, a sideshow unnecessarily created by a TRO which interfered in the legislative process.

I’ll be posting updates about the court proceedings in Wisconsin throughout the day, based on various news reports, in reverse chronological order (with commentary from time to time by me):

Per tweet, Sumi says bill not published.  Clearly wrong, as discussed in prior posts. [see new post for details.]

Per tweet, Sumi says dismayed since an “easy” solution – revote and renotice.

As I suspected, the day was not done.  Per tweet, Sumi enjoined further implementation of bill.

Not clear as day ended in court whether there would be modifications to the TRO to stop implementatino of the law.  Per in-court tweets, session has ended, but some directive to attorneys to work on the form of Order.

Local TV station reports there will be no decision today, and hearings resume Friday.
Per tweet, looks like done with witnesses, at least for the day, and Sumi now going to hear arguments on alterning the TRO.  Not sure if this means she’s expanding the scope.

Showing video in court of committee meeting.  So?

Per tweet, looks like case will continue today, after State requested recess because legislators immune, but then will continue Friday.  Does this mean two days off from hearings?  Not clear.

Bob Lang, Director of Legislative Fiscal Bureau testifying about process by which bill was rewritten to take out fiscal matters and pass committee — per tweet no single place in Capitol in which committees held.

After lunch break, per tweets, discussion of who can represent Sec. of State.  Apparently new lawyer showed up and Judge expressed surprise that meeting client for first time.  Well what did she expect, it was only a couple of hours ago that she told the State to get him a lawyer.  Another example of how today’s hearing has turned into a sideshow over whether the bill is law.

Miller said he had independently concluded he had a duty to publish the law, and [Deputy Attorney General Kevin] St. John agreed with that….

Miller said he concluded he was required to publish the law, but he did not believe that it would go into effect until the secretary of state acted. Fitzgerald and the Department of Justice disagree, saying the law is now in effect because the bureau published the law.”

ACLU Wisconsin also live tweeting – while much will be made of the fact that LRB was asked to publish the bill, I don’t think that makes any legal difference.  The issue is whether publication was effective, not why they did it.  Per tweet, head of LRB says that comfortable that publishing was correct: 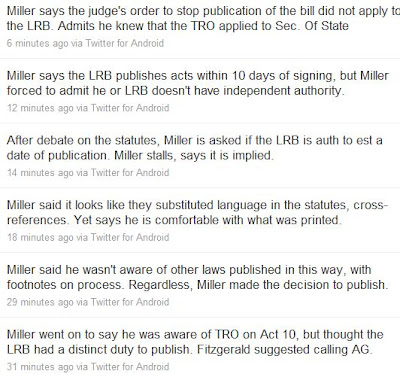 For those keeping score at home, we haven’t even touched the open meetings issue yet today. Only publication procedure from last week.

JSOnline – Testimony by a witness from the Legislative Reference Bureau (LRB) to the effect that the LRB was directed by Scott Fitzgerald, the Republican Senate leader, to publish the budget repair bill.

JSOnline – Judge Sumi ordered the State to get a separate attorney for the Secretary of State, since the Dept. of Justice position on the law (that it was in effect) differed from the position of the Sec. of State.

JSOnline – hearings today before Judge Sumi to continue on the issue of whether the budget repair bill has become law.

This is why the US Supreme Court DEFERS to the legislature on separation of powers grounds — if the legislative clerks confirm that the law is passed, then it is passed. This circus in Wisconsin is what puts lawyers and judges in such low regard. The anointed judicial elites dictate the outcome they want, and presume to tell the supposedly independent legislative branch how and when they are to conduct their affairs. A more admirable judiciary would realize that this is beyond their domain — this judiciary prefers the circus.

defendants should have asked Sue Me to recuse herself for her obvious conflicts. her bias is evident.

"New order adds in any further implementation, to issue declaration that act has not been published, says act is not in effect". Judge Sumi

I cannot believe judge Sumi has tightened her grip and seems to be unable to turn loose.

Like someone on some post said; "Sumi is on the national stage now and refuses to leave".

About time for someone to get out the shepherds crook and give her a good yank.

Reminds me of the issue of lighting at Wrigley Field (was this in the 80's or the 90's, I forget?). But a local judge ruled in favor of the neighborhood, prohibiting the light installation, and it was obvious this was going to be overturned, and it was, but that aspect of a local judge playing to the hometown audience is about the only thing I see explaining Sumi's injunction. It may work in Dane County, but not in the reality that surrounds it. Bravo to the GOP and the LRB for seizing the opportunity left open by Sumi's narrowly targeted TRO.