Wake Up and Hold Your Nose

Wake Up and Hold Your Nose 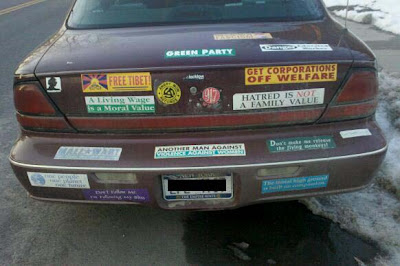 And the bumper sticker on top of the trunk which is barely visible in the photo above:

Of course, if there really were fascism here, the driver would be in prison by now.

Hey Bill you might find this one amusing considering your legal back ground ….how ya think this one is going to work out

You know, I always see those stickers and no one can ever tell me where I can get my free Tibets. Usually they just glare and walk the other way. Maybe there aren't any more free Tibets.

Actually, I agree with the one about corporate welfare. It goes well with the one sentence tax code that I'd like to see.

My ideal? Each year all of us (and I mean everyone) gets a one page form from the IRS that says,
"Determine how much money you made last year and send us a check for 15% of that amount."

I agree with getting corporations off welfare too, the gov needs toget out of the business of picking winners and losers… how about no more handouts to the unions too.

> if there really were fascism here, the driver would be in prison by now.

It reminds me of an exchange i had one time. i was chatting online and i went to a liberal chatroom and said awful things like, 9-11 wasn't an inside job. So they are arguing with me, right…

And finally i said to them something like this: "but you don't really believe it. because if you really believed it, you wouldn't be just talking about it, you would be doing something. if i believed that my government killed 3,000 innocent civilians to drag us into a war, i wouldn't be whining about it. I would be getting my gun and calling for revolution. The fact you guys aren't is proof you know this is BS."

They then decided i was an FBI informant trying to goad them into incriminating themselves. heh. they just say this kind of crap because it allows them to build of the fantasy of brave opposition to evil.

As far as a living wage being a moral value, check out some of the research done by this Princeton economist:

He has done a thorough investigation of the early progressive eugenics movement. Some of the progressives considered a minimum wage to be a way to eliminate the unfit from the workforce, social eugenics.

So really is it a moral value or a way to eliminate the Scabs?

Sorry that link did not show up.

"Of course, if there really were fascism here, the driver would be in prison by now."

Judging by the left's behavior the last few years, I wouldn't bet on that.

And not one of those 'buy-one-get-one-free' deals, either.

Why is it never "Free North Korea"? Are some oppressed, starved and tortured people less cool than others?

i remember chatting once with a girl in some third world country, going, "my sister has lived below the living wage for 9 years."

and i replied, "and the living wage, in your opinion, is just enough to survive, right?"

"So how did she live 9 years without it?"

Sort of runic rhyme asks why is it never "Free North Korea". Related questions: why don't those stickers ever address the "Free Tibet" concept in more concrete terms as to what freeing Tibet would require – something like "USMC into Tibet"?

I can just see the owner approaching his car with a few new bumper stickers … cut to Roy Scheider in "Jaws" … "You're gonna need a bigger car."