Strange What Gets Them Excited In Wisconsin

Strange What Gets Them Excited In Wisconsin

Democratic protesters chasing down and cornering a Republican state Senator outside the State House? Snooze.

A Democratic blogger engaging in possible identity theft in order to embarrass the Governor? Snooze.

Democratic Senators fleeing to another state to prevent the duly elected Senate from voting, thereby nullifying the vote of the People? Snooze.

Democratic supporting police and other union chiefs sending shakedown letters to businesses demanding they come out against the Governor and legislature? Snooze.

Democrats widely comparing the elected representatives and Governor to Hitler and Mubarak? Snooze.

Republicans lawfully using the state Open Records Law to obtain e-mails of a Democratic supporter who may have used the state e-mail system in connection with actions supporting Democrats in violation of state policy?  OUTRAGE, HAVE YOU NO DECENCY SIR: 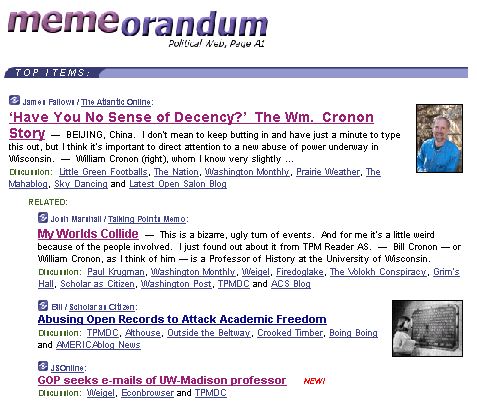 I actually agree that just because you can do something, doesn’t mean you should.  And in this case, it does seem that fishing through a Professor’s e-mails just because the law allows you to do it is bad form.

But so too is running away to another state to use the technicalities of the quorum rules to nullify the vote of millions of Wisconsin citizens.  And so too is invoking the technicalities of the Open Meetings Law to claim inadequate notice to Democratic Senators who had fled the state and had announced they would not return anyway even with notice.  And so too is exploiting the technical distinctions between police acting in an official capacity and police acting in a union capacity to abuse the power of the police for political purposes.  And so too was the takeover of the State House, though technically legal.

You see, in a political battle there are plenty of legal technicalities which the parties use to gain advantage.  Democrats have not hesitated to invoke such technicalities to their advantage, even though some of the results were atrocious.

So if the Professor did not follow state rules on use of the state e-mail system, and if Republicans exploit that legal technicality to obtain the e-mails under the Open Records Law, it’s hard to get very excited.

Correction:  I originally used the term Freedom of Information Act, but in Wisconsin it is called the Open Records Law.  I have corrected the text above.  It is the same law under which tens of thousands of e-mails sent to the Govenor were obtained.

Update:  Ann Althouse, who is subject to the same Wisconsin e-mail rules as the Professor at issue, notes that she avoids using state e-mail for political purposes:

With hindsight, it’s easy to see what a mistake it is to use your wisc email account for anything other than class email lists and responding to email that UW people sent to your wisc address. I’ve known for years and years that there is Open Records vulnerability here. I use gmail myself to keep my notes and personal interactions out of this potentially public realm.

Related:  Loks like there may be another technicality which works to the advantage of Republicans, as the Legislative Reference Bureau, an non-partisan entity arguably not subject to the TRO, has published the budget repair bill this afternoon.

They are now running ads claiming Prosser was soft on prosecuting a child molesting priest in '79.

– Tennessee Man shoots up Unitarian Church killing 2. Cops say he "left a four-page letter that detailed his frustration at being unemployed [and] his hatred of gays and liberals." American right yawns.

– Minuteman leader and tea party activist Shawna Forde helps organize and takes part in the murder of a Hispanic father and his nine year old daughter in a home invasion. American right yawns.

– Glenn Beck fan Byron Williams attempts to shoot up the Tides Foundation but fails after getting into a shootout with the police on the way there. He is successful in wounding two policemen. American right yawns.

If a sunshine in government supporting professor is not sufficiently savvy as to realize his publicly funded job and email account are, and should be, subject to public review, then he should be fired for being a hypocritical nuisance and mental deficient.

Live by technicalities and political latitude, then be prepared to go down by them.

Andrew: and your brother beats up geeks for lunch money. So?

It may even be that if you check your gmail account from your work computer, the employer (1) may have a record of what you saw, and (2) may be able to use it. In employment disputes, counsel often advise clients to (1) to call only from personal cell or landline phones, and (2) to use only personal e-mail accounts on personally owned compters.

Actually, Andrew, in each of those cases, the American right's response is to point out that the victims and would-be victims should have the right to defend themselves *AND* the perpetrators should be prosecuted to the full extent of the law.

Up to and including being executed for their crimes.

Now, how about you lefties and Mumia?

I remember hearing a little bit about Shawna Forde. A very quick Google search casts doubt on Andrew's assertion. It seems she was not a member of the Minutemen and leaders of the movement and her family were suspicious of her motives and state of mind.

Actually, some unions might expect their political campaigning to be hidden should they use educational servers. Until recently my college union did all kinds of lobbying/organizing on the college servers. See 'Republican Party of Wisconsin Seeks E-Mails From UW-Madison Professor William Cronon'. You're linked there.

Andrew: You can't really be serious in attemtping to go "tit for tat" in comparing the right and left when it comes to violence and how it is portrayed in the media (or even reported)and who has the moral highground in that battle.

Luke, Copperheads like Andrew are Liars, and dogs bite men….