Andrew Sullivan loves to accuse conservatives and Republicans of blowing various racial and other dog whistles:

But Sullivan hates it when others accuse him of blowing dog whistles, particularly when it comes to Israel and the line between legitimate criticism of Israeli policies and pandering to the anti-Semitic instincts of the anti-Israeli “Street“.

So why did Sullivan run a photo of Mike Huckabee standing in front of an Israeli flag for Sullivan’s post regarding Huckabee’s comment about where Obama grew up, which had absolutely nothing to do with Israel? 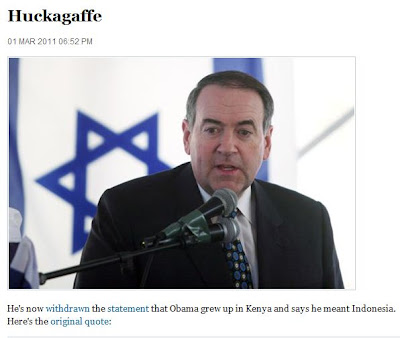 Of all the photos of Huckabee, why that one?

The only hint is the last sentence of Sullivan’s post, “Huckabee always seems a pleasant fellow. But then you hear him on gays or on Israel/Palestine or on this kind of issue, and you realize just how extreme this affable man actually is.”

Now I get it, even issues having nothing to do with Israel need to be turned into an issue about Israel.

That wasn’t a dog whistle, because everyone could hear it.

Andrew should know that I only respond to dog whistles manufactured by the Protocols of the Elders of Zion Manufacturing Co. When a PEZ whistle goes off, I'll be jumping up licking your face faster than you can say, "Here Jew-hating boy!"

He is one sick puppy.

The very idea of Zionist homosexuals would shortcircuit Sullivan's brain, like Twisted Logic.

I can just picture Andrew Sullivan opening up the file on his computer of saved pictures of Huckabee. It has a total of two pictures.

"Let's see. I need a photo to help illustrate Huck's verbal gaffe yesterday. Hmmm … I've got this funny picture from Huck's TV show when he was clowning around with a guest, trying to show how agile he is. He's got his foot in his mouth. Great picture! And then I've got this other picture of Huck standing in front of an Israeli flag.

No contest, is it? I have to go with the Israeli flag. It's just perfect."

Any homosexual who is choosing sides in the Arab-Israel conflict (note I do not say "the Palestinian-Israel conflict") and does not enthusiastically choose Israel is either not thinking clearly or has other values that are more important to him.

And apparently wholehearted support for Israel is "extreme." Perhaps Sullivan prefers J Street's "pro-Israel" stance which is not very pro-Israel.