AARP – But You Knew That

AARP – But You Knew That 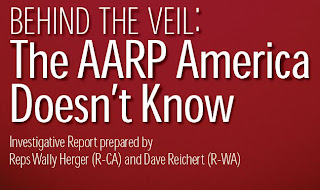 Washington, D.C. is shocked to find that AARP may have had a financial incentive to push Obamacare:

“The report also details the Democrats’ health care law’s significant cuts to Medicare Advantage (MA) and how the interplay in the marketplace between MA and Medigap will increase Medigap sales. This will have a direct, significant, and positive impact on future profits at AARP. Also troubling is the report’s central finding: The Democrats’ health care law, which AARP strongly endorsed, could result in a windfall for AARP that exceeds over $1 billion during the next 10 years.”

But you knew that, because I posted about it on September 30, 2009, AARP Shills for Kennedy:

The role of AARP in supporting Democratic party proposals has received some attention, but not nearly enough. AARP presents itself as a neutral organization interested in the welfare of seniors, but in fact, AARP has extensive financial interests in promoting its affiliate insurance plans.

And again on November 4, 2009, AARP Prepares To Sell Out Seniors:

ARP only nominally is a senior citizen interest group. In fact, it is a product-selling machine, and among the many products it offers through marketing deals are insurance plans. Much like Consumers Union, which has shilled for the Democratic Party’s proposals, AARP is a financial conglomerate which misuses its purported non-partisan stature to its own financial benefit.

And again on November 5, 2009, Alphabet Soup of Health Care Delusions:

The AARP and AMA statements are political statements, divorced from any reality as to what is in these bills. The AARP and AMA have made Democratic friends on Capitol Hill, but at the cost of selling out their own members and the American people.

And again on December 2, 2009, AARP Rides To Obamacare’s Rescue, Again:

Congratulations Senior Citizens. Your self-appointed advocate, AARP, has intervened again in favor of Democratic health care restructuring proposals … In the meantime, read my prior posts on the insidious roles played by tax-exempt organizations, such as AARP and Consumers Union, in raising taxes on the rest of us.

And one last lament on November 27, 2010, When Will AARP, Consumers Union and AMA Be Held To Account for Obamacare?:

It is time to hold all institutions — not just for-profit corporations — which helped pass Obamacare to account for what they did. AARP, Consumers Union, and the AMA would be a good start.

I need a bigger megaphone.

I like their mailers. They make a great fire starters in my fire place.

Having been a card carrying senior citizen for almost two decades, and living in an area resplendent with geriatric peers who too easily recall the WWII and Vietnam eras, I've taken to separating my wizened friends into two groups: those smart enough to know AARP is not their friend, and all other senior dunderheads who are both boring and stupid.

Other than nescient drooling, it's the surest way I've discovered to determine when an OAP is finally over the hill.

I've heard radio commercials that this organization is the conservative answer to AARP. I can't vouch for them … just relaying the information:

"I need a bigger megaphone."

No, it wouldn't matter if it was screamed in their collective ear. They don't care; they won't listen.

AARP got what they wanted – lobbying for their cut and forcing Obamacare down our throats, while sacrificing their members – the elderly. "Evil" insurance companies in on the deal will get rich, before they go all out of business, including the AARP sleaze-ball liars.

Now, if Republicans can get organized and smart enough (and courageous enough!) to call out the Dems – especially Obama – on all their lying, lies and [email protected] lies, then 2012 might be the beginning of a beautiful turnaround.

I guess they figured National Health Care is such a good idea it's no surprise anyone would support it? There only shock was that there were people opposed to the magical conjuring of free healthcare for all.

So much for ethical concern. My step-father always flashed his AARP card for discounts on everything. He didn't care about their other activities. Now that I qualify for AARP membership (which I declined) I find that I can get a room for $404 per night at a very nice resort in the Florida Keys in which we can celebrate my wife's birthday. Without the AARP card the price goes up dramatically. My step-father and others join AARP for a simple reason. They are bribed. I still will not join and I will still fight them.

My wife takes the AARP return envelope and fills it with as much junk mail as she can, includes a little note about how they can screw themselves and mails it back…at their expense.