As I reported last September, TeaPartyTracker.org was formed by the NAACP, Think Progress, Media Matters and NewLeft Media to “monitor racism and other forms of extremism within the Tea Party movement.”

In fact, TeaPartyTracker.org never really served a monitoring function; it merely served as another outlet for Think Progress and Media Matters to continue their campaigns to paint the Tea Party movement as extremist.

NAACP jumped on board the agenda with both feet in July 2010, and TeaPartyTracker.org served as the vehicle through which these groups would go after the Tea Party movement.

But an interesting thing happened.  TeaPartyTracker.org has gone dormant, with no new entries since October 20, 2010: 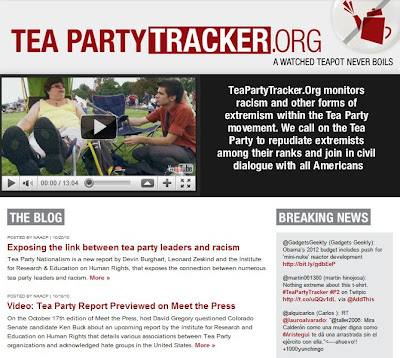 As I noted when TeaPartyTrack.org was formed, the purpose never really was to monitor the Tea Party movement.  The public relations blitz regarding the formation of the website was what mattered in the run-up to the November elections.  Merely forming such a website was the point, so as to create the appearance that Tea Parties needed monitoring, and to draw attention away from the Glenn Beck rally in Washington.

Once the Democrats took a shellacking in November, TeaPartyTracker.org served no useful purpose.

Considering all the violent and extremist rhetoric used by union protesters in Wisconsin, I doubt we’ll be hearing much more from TeaPartyTracker.org.

A crappy slogan makes you shiver.

Noting the propensity of progressives in our midst to ceaselessly "TRAK" opponents, maybe it's time for an "SEIU Tracker.Org" to be formed.

Oh, wait. They are so predictably greedy it's not really necessary. Look for the avaricious bullies, look for the purple shirts. Got it.

Who is tracking the Coffee Party?

Paid a visit to the site. It's interesting to watch their slideshow of Tea Party extremism. There are a few photos of slogans involving the word "socialism" and a couple Nazi references. Mostly, though, it's people holding signs the organizers of the site simply disagree with — pretty weak tea, so to speak. The evidence seems to suggest there's been a lot more extremism in a few days of Labor protests in WI than there was in *months* of Tea Party events. Is anyone really surprised?

Kind of hard to track what isn't there.
Perhaps they should go track down Nessie, Yheti, Bigfoot, or even Champ? Odds will rise exponentially that they are doing something more productive with their time.