Despite threats by some police union members to stop the evacuation of the Madison Capitol, and some wishful thinking by supporters of the protesters, the Capitol has in fact been closed as of 4 p.m. (CT) today, with “peaceful resistance” by some protesters.

As reported a little after closing by The Journal Sentinal:

At a little after 4 p.m. Sunday a call went out over the loudspeaker: “The Capitol is now closed.”

But just because authorities made the announcement, that doesn’t mean the protesters have left the building, scene of protests against Gov. Scott Walker’s budget-repair bill.

Authorities are working with protesters to make sure the state Capitol closure goes smoothly. It could take at least 90 minutes to accomplish the task. Those who plan to be “peacefully arrested” have assembled on the first floor, while those who plan to leave remain on the ground floor of the Capitol Rotunda.

Based on television coverage as of 5 p.m. (CT), the rotunda still is pretty full, with the police taking a soft approach to removing people.  All of the protesters have moved to the first floor.

Update 6 p.m. (CT) — per television reports, most people have left the building, but a few dozen still remain.  (Watching FoxNews, someone just threatened to “break the neck” of reporter Mike Tobin as the reporter was giving his presentation.)

Update 8:15 p.m. (CT) — based on a live cell phone feed, it appears that there still are some protesters in the building, but it doesn’t look like that many.  A couple of hours ago, the floor was covered with people sitting down and chanting, but now there are far fewer people just milling around.  Apparently there is a no re-entry policy but the remaining protesters will be allowed to stay overnight without sleeping bags or mattresses, or much in the way of new food supplies. 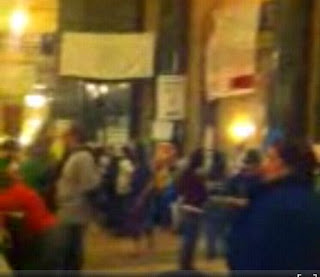 Update 2-28-2011:  The Capitol Police have reversed course, and now say protesters will be allowed to stay overnight in the Capitol.  I’ll have more on this later.

In the 60's they'd have been greeted with billy clubs.

And if I gotta hear "Show me what democracy looks like" one more time, I'll scream. This isn't about "democracy", at least not the Representative Democracy under which we live. It is about mob rule.

Is there a link for streaming coverage of this?

There's only one active live stream for now.
http://qik.com/Brandzel It's pretty poor quality.

This has long since been a simple protest. This is a battle to keep the public sector union members feeding at the public trough, i.e. the taxpayers.

But I guess being in a public sector union means you can go to work when you want to (since the schools are closed) and still expect to have a job. Cushy gig if you can get it.

But at least I have to give the CWA guy who appeared on Judge Jeanine's show last night credit; he said this was really all about Democrats vs. Republicans and that even though the Republicans won, and now have control of both Wisconsin Houses, and the governor's office, the unions are not going to let the Republicans nip their backing for Democrats in the bud by allowing people to decide if they want to pay union dues, or not.

For two years we hear "I won" and that "elections have consequences" and the Dems were perfectly happy with that policy until they were so badly tromped last November. Now, true to Democratic tactics, it's all about "democracy".

Who do these clowns think they are fooling?

Thank goodness they are finally kicking the riff-raff out. Ideally, Chris Christie would show up unannounced in some superhero outfit and insist to help physically remove people from the building.

AP is reporting that as of about 10 minutes ago (about 10:00 p.m. Sunday night eastern) police are allowing the protestors to stay:

Time for a new Capitol Police staff, obviously Doyle holdovers. That is why the unions must go, THEY control instead of the people we elect.

It is shameful that the police decided to let anyone stay. Back in the '60s heyday, that was called a sit-in, and the sit-in protesters were hauled away to jail. But the unions own this police force (and probably most of the nation's, sadly).

I propose a plan of action: WI Assembly and Senate pass a bill allowing for a right to work state (i.e. union membership is optional); the Governor signs it; he announces that all police who will not sign a paper stating their allegience is to do their sworn civic duty over supporting the union will be fired, and replaced (a la Reagan with the ATC incident).

Maybe it is over-reach. But it is time for Republicans to stand up and make the needed changes while they have the seats, the governorship, and the people's support (and a majority of the nation's, too, after all the thug violence and mob rule).