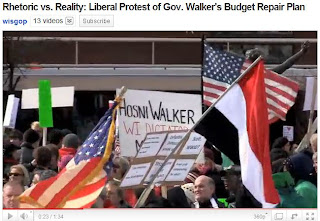 The video below is getting a fair amount of attention for the comparison of Wisconsin Governor Scott Walker to Adolf Hitler, and the hypocrisy of senior Democratic politicians on the subject of Hitler comparisons and overblown rhetoric.

We should all strive for a government just like the current military council in Egypt …  (perhaps they need to think through the analogy a little better).

It’s a good thing they are not carrying the Gadsden Flag, because that would be uncivil.

Update:  A commenter mentioned a “join or die” flag being used by protesters, I believe this is it (via Ann Althouse, who notes that “Sic Semper Tyrannis” is what John Wilkes Booth yelled when he shot Abraham Lincoln): 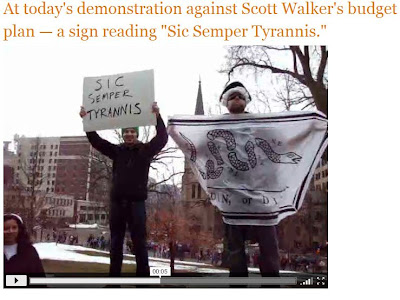 And, even Joe Klein gets the irony (h/t @benpolitico):

Revolutions everywhere–in the middle east, in the middle west. But there is a difference: in the middle east, the protesters are marching for democracy; in the middle west, they’re protesting against it. I mean, Isn’t it, well, a bit ironic that the protesters in Madison, blocking the state senate chamber, are chanting “Freedom, Democracy, Union” while trying to prevent a vote? Isn’t it ironic that the Democratic Senators have fled the democratic process? Isn’t it interesting that some of those who–rightly–protest the assorted Republican efforts to stymie majority rule in the U.S. Senate are celebrating the Democratic efforts to stymie the same in the Wisconsin Senate?

And Professor Bainbridge makes the case against public employee unions:

… public sector unionism lacks the economic justifications for private sector unionism. It results in significant distortions of the political process, which have real adverse consequences for the taxpayers. What’s happening in Wisconsin … thus is quite heartening. The efforts by the Governor and the republican legislative caucus to reform public sector collective bargaining rights is an essential step towards fiscal sanity and political democracy.

——————————————–
Related Posts:
First They Came For The Right To Retire After 30 Years On Full Salary With COLAs
NY Times Editors Endorse Mob Rule

For 8 years the mainstream media, either through commission or omission, hid from the general public the vile over-the-top anti-Bush signs and speeches that came from the left (Zombie cataloged the Bay area protests rather well).

It was so well kept below the radar that even the few honest, conscientious liberals in my midst were unaware of it. When they were outraged at the original Obama-as-Hitler signs I happily showed them some of the Bush era vitriol.

Now, however, the unhinged left is in full flower on national TV. I'm already enjoying the blow-back as normally left-leaning co-workers are suggesting that the anti-Walker protesters are over the line.

I'm sure they'll return to the ranch once things die down…but for the moment it appears as if the unions and their lackeys are overplaying their hand. I hope they keep it up.

Speaking of flags, in the picture circulating of the person calling for the Wisconsin Governor's assassination – for what else can echo the cry of Booth imply? – did you notice the Join or Die flag with the chopped up snake?

Does that imply a threat to Tea party members of violence? I think next to the Booth quote it is.

technogypsy — I was trying to figure out what that juxtaposition meant myself.

What — so I don't have to contribute to my retirement but I can fork over money to a union which promotes violent rhetoric against legally and democratically elected representatrives who serve the public?

Thankfully, nobody will get raped in this crowd.

technogypsy, what the presence of Revolutionary-era slogans and signs at a union rally suggests to me is that they're trying desperately to delude audiences into believing they're showing that same spirit.

Tea Partyers are now planning to charge in like the Riders of Rohan. I will leave it to you to pick Obama's character in my Lord of the Rings analogy.

The threat of global debting is settled science among the voting community and these people are deniars.

"Tea Partyers are now planning to charge in like the Riders of Rohan. I will leave it to you to pick Obama's character in my Lord of the Rings analogy."

technogypsy: That particular image, with the chopped-up snake and the slogan "Join or Die", dates from the Revolutionary era; it was a political cartoon urging the then-colonies to work together lest Britain abolish their autonomy one by one. If you look more closely, you see the bits of the snake labelled with the names of the original colonies. I don't think that particular sign is advocating violence against anyone, at least not in the sense that the slogan "Join or Die" without context might be taken to.

Re-posted here with a link back to you.

May it go VIRAL!

One of your many fans, Ronbo

"… Isn't it ironic that the Democratic Senators have fled the democratic process? …"

At some point, these proudly-rebellious Democrats can be considered to committing (aargh, what? MISfeasance? or MALfeasance?), and can be impeached or recalled or in some way removed from their jobs, right?

As somebody-famous once said, "The first rule for success is – SHOW UP".

And it ain't just flags . . . welcome to the new civility!

Yep! It must be the fault of Mark DeMoss for dissolving the "Civility Project" because only three Members of Congress signed up to take the pledge.

I think one of the greater observations that we have to keep in mind in regards to the events in Egypt is that whatever happens, the result will not be an isolated event within the country. Instead, precedents (as explained here: http://www.pressdisplay.com/pressdisplay/showlink.aspx?bookmarkid=RIK3MJA1P6U7&preview;=article&linkid;=d5d8c2a4-7ecd-4a0d-b521-97a7f1d5b402&pdaffid;=ZVFwBG5jk4Kvl9OaBJc5%2bg%3d%3d) seem to indicate a very strong impact within the Middle East in general.

Well I hope this little bit is something to also keep in mind.