One Of These Days I’ll Follow My Own Advice

One Of These Days I’ll Follow My Own Advice

Posted by William A. Jacobson Saturday, January 8, 2011 at 09:21am 7 Comments
More Sharing Options

I have warned you, but I don’t take my own advice.  Damn Operation Demoralize, it’s like the wreck at the side of the road and I can’t drive by without looking.

It’s been fewer than three full business days, and Republicans control only the House, yet this: 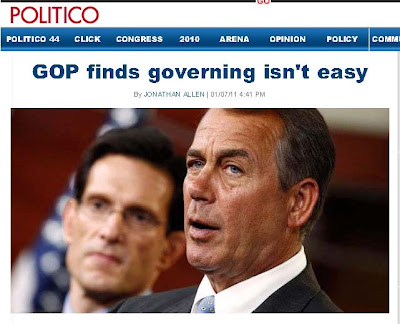 Professor, don't let it get to you. The problem is you keep forgetting that all Tea Party members, me included, suffer from paramnesia which complicates the fact that perception is everything. We also have a hard time with reality because we have so many things like this rattling around between our ears…

"Here's a good rule of thumb: Too clever is dumb."
– Ogden Nash

Three whole days and no quagmire yet? I'd say that's good.

Really you do need to stop reading this nonsense if it is going to just upset you. Truthfully hold it up to the ridicule it deserves and stop giving yourself aggravation.

I'm not sure I get your point professor but the GOP is finding itself flailing this quickly because they make declare promises and make dramatic pledges without and then make excuses the very next day. That is why Tea Partiers like me are refusing to cut the GOP even an inch of slack.

1) Why didn't they make the logical gesture of introducing a few Tea Party leaders like Michelle Bachmann into party leadership? That was a brutal slap in the face and yet "heard us".

2) Why did they promise to slash $100 billion of spending days ago only to now learn that they just "discovered" that they can't do it? We are the ones who are being unreasonable for criticizing them? It isn't the MSM that will doom the GOP, it the GOP itself and its enablers. I am already hearing REPUBLICAN pundits like Ann Coulter criticizing the Tea Party and defending the GOP.

3) Why did they take that "Pledge" to honor the Constitution when they all took the following oath:

"I do solemnly swear (or affirm) that I will support the Constitution of the United States."

Be careful professor, you may one day regret that you succumbed to the RINO campaign to demonize the Tea Party by reattributing the Tea Party criticisms to the MSM and then delegitimizing those issues. That would then put the Tea Party in the phony position that they are just tools for the MSM.

The GOP doesn't deserve to be cut any slack. We are already facing another 2008-like RINO stampede for president, an ordeal we would be better without, and now many in the "conservative" blogosphere are calling for cutting these lying weasels slack.

That's how we are going to lose in 2012. If we don't get 2011 right, there will be no 2012 for the GOP. We don't have time for this little exercise of "give them a chance". It's not like this is a new leadership. They've been there forever. If they don't have their act together already, that is all we need to know.

@phil: I have seen much of the same. "Mainstream" GOP has forgotten what got them back in the majority. We need to keep whacking them…hard. We need to make their stupidity hurt.

Exactly. These RINOs are trying to persuade us that they had no choice but to lie to us because we insisted on it and now they are trying to be "reasonable" by pointing out to the squishes on the sideline that they are being picked on. And the enablers in the blogosphere and doing the MSM switcheroo.

All of the 2008 RINOs are already on the prowl and threatening to ruin everything. Yesterday, even neocon William Kristol was arguing that maybe we ought to just endorse a Ryan/Bachmann ticket right now and skip the RINO stampede (my term, not his) altogether. Amen to that!

correction: as the professor reported yesterday, it's a Ryan/Rubio ticket not Ryan/Bachmann (which would work too). It's not just my typos that are annoying.