Mr. President, Make Him An Offer

Mr. President, Make Him An Offer

President Obama took his State of the Union message on the road Wednesday afternoon in a state that he won easily in 2008 but that shifted sharply to the GOP in the 2010 midterm elections.

“In this new and challenging time, when America is facing tougher competition from countries around the world than ever before, we’ve got to up our game,” he said on the factory floor at Orion Energy Systems, a high-efficiency-lighting company based here. “We’re going to need to go all in. We’re going to need to get serious about winning the future.”

Obama’s stop at Orion was the first of three he made at companies in this eastern Wisconsin town of about 34,000. He is the first sitting president to visit Manitowoc.

A reader lives in Manitowoc, and e-mailed me this note and the photo below:

After suffering through 45 minutes and 2 detours to make a trip to my local Subway for lunch yesterday (a trip which normally takes 3 minutes, thanks Mr. President.) I spotted this sign in front of one of the many homes for sale in Manitowoc.

Ironically, the sign is across the street and 1 block north of where the piece of Sputnik landed in Manitowoc. [my note – yes, it did happen.] 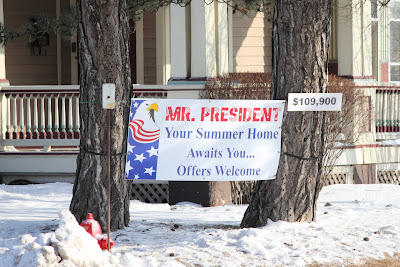 Somehow, I think the owner still is waiting, along with the rest of the economy.

Palin summed it up brilliantly,

Why is it that the man the left claims to be the most brilliant President this nation has ever had can only speak in sports terminology? Or am I the only one that has noticed that?

"tough competition, up our game, go all in, winning" He might as well be taking about the Super Bowl and his favorite team.

Then we have such intellectual comments such as "we have to make stuff and sell stuff".

I am sick to death of the street jargon coming from The Won. Perhaps it is time he learns to talk like a President, and not a coach because so far, he seems to be leading a losing team.