You Can’t Take Away This Bumper Sticker’s Dreams

You Can’t Take Away This Bumper Sticker’s Dreams

Posted by William A. Jacobson Saturday, December 4, 2010 at 07:00am 5 Comments
More Sharing Options

Taken by reader Rich at a Wal-Mart parking lot near Tampa in late October: 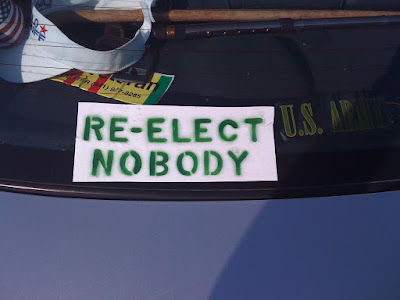 I agree! I think we should enact another Constitutional amendment simmilar to the 22nd to impose term limits on both houses of Congress. Perhaps 2 terms for Senators and 4 or 5 terms for Representatives? Just a thought

And Charles Rangel should be an easy poster boy for an 'Anti-Incumbency Insurrection' (credit to Bill).

I'm not all that fired up about term limits. There are enough democrat ex-congress-critters around now (southern blue-dogs especially) that were elected in 2008 and did plenty of damage in their single term.

On the flip side, term limits can hurt, i.e. I would've loved to see a third Reagan term, though he would not have been able to complete it.

I just wonder about whether any elected official remains accountable to the electorate once he begins his final term. Once he loses that accountability, does he become like a tenured professor, beholden to other 'special interests', such as amassing his own power, featherbedding, etc…

In the end, I see term-limits as not the particular hill I wish to die on. In fact, limits may take some power away from the electorate who in the end should be the ultimate term-limiter.

I have found what I consider one of the best bumper stickers to date. How can I send it to you.
I don't use Facebook, Twitter, et al and I don't see an E-mail address on your blog.

@gus. Click on my photo and it will take you to a link for my email.