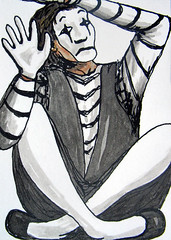 Not the right-wingers, the left-wing “base” of the Democratic Party.

Dick Durbin is threatening that a bloc of Democrats may “walk out” on Obama by voting against his tax deal.  Mary Landrieu calls the deal “almost morally corrupt.” The left-blogosphere is alive with the sound of boo-sic.

Not going to happen.

The Democrats — particularly the left-wing “base” — never will walk out on Obama.

Like the mime in the box, deep down they believe that they have no place to go.

C'mon, ya'll expect the KGB to walk away from Putin? Bad analogy cuz Putin has balls and Obama's still got his hands in his pockets searching.

Nice picture of President Obama! Also, the senior Senator from Illinois's surname has an 'i' as the fifth letter. Changing it to an 'a' makes it a city in South Africa. I think that that's an understandable mistake, myself.

Walking away from Obama would be raaaaacist. Don't they know he's the first black president (TM)?

Like the mime in the box, deep down they believe that they have no place to go.

Precisely. Once past the Sturm and Drang, they'll go along with the program.

After all, sheep are in their nature. If it wasn't, they wouldn't BE democrats.

If they don't walk away, George Soros might take his money elsewhere and start a progressive party just on principle. The Dems have spent too long playing the class war/bush tax cut game that I don't see how they COULD vote for it.

My prediction: Pelosi will refuse to schedule a vote on it at all and engage in a full PR battle to blame the Republicans for holding them "hostage" for a few millionaires and billionaires. She (and the left dems) WANT the tax rates to go up on income, capital gains and the estate tax. She'll have a separate vote for unemployment benefits and left the Reps kill that too. She's already shown she doesn't care about independent voters…and I don't think she has any love for the President.

I gotta agree with ThreeSheets. But I think this is all planned. Make Obama look like he's moving to the center and use Pelosi/Reid et al to make the GOP look like they are renegging on the deal.

Faux rage is all they know.
Since they can't win on ideas, it's all they've got.

I think Obama looked too angry in his last 2 appearances for this to be kabuki theater. You've got 5 (D)'s that voted with (R)'s, and won't likely change. Nan can rant all she wants, but, her gavel at this point might as well have been made by Lego.

Mary Landrieu is the scioness of the most corrupt family in NOLA corrupt Democratic machine politics, and her daddy Moon and his cronies were the ones who for sixty years before the Hurricane of '05 hit had been telling the US Corps of Engineers where to subcontract out the strengthening and maintenance of the dikes and levees that collapsed during the big blow. The Landrieu family is more responsible for Katrina and its aftermath than any other of the corrupt entities in the Bayou State, including poor GWB, who got caught holding the bag by the corrupt lamestream MSM.

So when Mary says 'almost' corrupt, you're hearing from a real aficionado of corruption…!

And Prof. Jacobson is correct, although Hurricane Katrina van den H and her marxist Alinsky colleagues defection from the Won's programs might last for a while, they have no place else to go, unless she's willing to help like-minded leftists like Hugo Chavez and Ortega take over the commanding heights of New York's Upper West Side, where she and her crony marxist coven-sisters dwell and plan our wrack and ruin.

I wonder if Obama will suffer the same fate of another failed president — John F. Kennedy — gunned down by an extreme leftist for lowering taxes and standing up for America.

Around 10:45 PM after I posted the comment above, I happened to switch momentarily to Larry O'Donnell [former Dem Finance Cte. Honcho] who was delivering a scathing attack much more pointed and sharp than mine against Mary Landrieu. Without calling her a silly whore, he implied as much, since her hypocritical remarks today come after he noted that nine years ago, Mary the Streetwalker Landrieu STRONGLY SUPPORTED the Bush Tax Cuts for everybody.

I wonder why this third-rate specimen of Senatorial silliness has shifted her opinion so strongly? I suspect money, her family's only claim to fame, might be behind her stance, but her use of the words 'almost corrupt' startled even a staunch self-proclaimed socialist like O'Donnell.