What Kind Of Sick Person Would Do This To A Cat?

What Kind Of Sick Person Would Do This To A Cat?

Spotted by a reader in Raleigh, NC, last week: 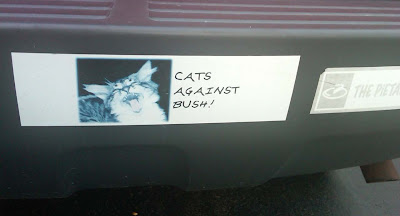 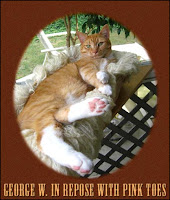 “I thought I’d refudiate that awful bumper sticker you currently have on your blog. Below is a picture of our beloved cat whose full name was George W. Bush Leader of the Free World. I insisted his complete name be recorded at our vet’s office in Marietta, GA. Interestingly, we adopted him in the summer of 2000 and my vet told me then that our George was the fourth or fifth cat/patient with a variation of the same name. We lost GWB two years ago on the Fourth of July, 2007. The photo below is my favorite picture of him, capturing his blasé yet totally in-control personality. He weighed 15 pounds had big bright green eyes and a very sexy swagger, plus those terribly cute pink toes.”

Cats have standards. Mine enjoy sitting on my lap and watching figure skating on TV or old time movie musicals (Oklahoma! is a favorite). My cats have been known to hiss when they hear La Pelosi's voice on the TV.

Of course, Rusty also purrs when he hears Bill Clinton's voice so I don't think his reactions are reliable!

LOL Gayle! You know some lefty hound dog is driving that car. Cryin' all the time now, no doubt.

As to "the enemy of my enemy is my friend," the "Mr. Boffo" comic strip some years ago had one captioned "Why philosophical rabbits have short life spans." It showed a lynx chasing a fox, the rabbit bounding happily behind the lynx thinking, "My enemy's enemy is my friend."

As to cats: If any animal is the leftist's caricature of a self-interested, self-absorbed conservative, it's cats.