Nancy Pelosi has been elected to lead House Democrats in the new Congress despite presiding over the loss of more than 60 House seats in the midterm elections.

The 70-year-old Californian was opposed by Rep. Heath Shuler of North Carolina in her bid to become minority leader in the new Congress. Shuler argued that Pelosi needed to go after presiding over the loss of the chamber earlier this month.

“There was a lot of unrest in the room for several hours,” Shuler said following the vote, arguing the strength of his challenge “sends a message” that the party needs to change direction.

Pelosi ultimately had little trouble repelling the challenge from Shuler, one of the relatively-conservative Blue Dog Democrats who saw their numbers decimated in the midterms. The secret ballot vote was 150 for Pelosi to 43 for Shuler.

Time to bring out the team photo, which remains the same.  It’s like waving a red cape in front of the American voter: 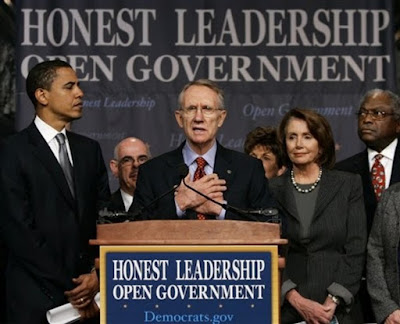 Hi! We are students at Smith College in Massachusetts taking a Research Seminar. We invite you to take a survey assessing gender attitudes and behavior. The survey should take between 30-45 minutes to complete and is completely anonymous. To thank you for your participation, you will be entered into a raffle for a $50 gift card on Amazon.com. Thank you in advance for your participation!

Hmm… the vote was taken by secret ballot. Need to keep this in mind when they want to talk about the card check option for labor unionization.

I completely disagree that this is a good thing for conservatives. Yes, it helps the GOP in 2012 but it pulls the Dems to the left and we know what Republicans do when the Dems drift to the left, they follow. This is the very lesser-of-two-evils status quo.

It would be so much better for the Democratic party to suddenly become a centrist party. At least the evil that the GOP is talking about wouldn't be so bad that they could get away with the evil alternatives they keep offering. They would have to be "less evil" than ever.

Do we want good government or just a socialist government run by Republicans?

pasadenaphil, I would agree we would be better off with a more centrist Democrat party. Unfortunately, there was no way that was going to happen. And, given that the blue dogs were the ones that gave them the majority (and made ObamaCare and all that other miserable crap possible) getting rid of them at least had the positive effect of destroying their majority in the House and bringing about some balance between the branches. But I wish we could be rid of the likes of Pelosi, Waxman, Stark, etc. Maybe California will secede and join North Korea….

I don't know if a bot posted that questionnaire or what. In a fit of pique, I went and tried to take it, but I found the quiz unfinishable. Most of the questions were either predicated on faulty premises and assumptions, or were flat-out loaded questions.

Now that we've done pretty much what we expected in 2010, the real work comes to the fore, which is making absolutely plain to our elected officials that they are our employees.

It's a long-term thing. For example, I have to watch my new Senator Mark Kirk like a hawk these next couple of years and keep track of everything he does. That way if he tacks left during now and then tries to run as a "centrist" again when his term is up, we can primary him out.

He might, though, surprise me and vote as a true centrist. He has shown flashes of backbone and frankly a reliable centrist might be as much as we can hope for here in Illinois. But I digress.

It's time now to lather, rinse and repeat. Any Republican who even looks like they might wobble to port needs to get primaried out. Get involved at the committee level and make sure we get rid of RINOs every election cycle. If they realize they have to actually vote the way they campaign, we'll see a different political landscape.

It's unfortunate that we have a country where honor is a rare commodity and lying is rewarded, but that's really our fault, isn't it? Time to take out the trash.

I do think, that in the short-term, it is a good thing. As Pelosi continues to act as if she's in la-la land, and drives her party further off the cliff, it gives us the opportunity to show the contrasts between left and right, and have an even better shot in 2012.

We do have to remind the GOP who put them in place, as well as that they can be replaced.

Either the Dems define success differently than the rest of the world, or everything is working perfectly according to their plan.

They also keep Sheila Jackson Lee, but the Republicans can't abide a bit of O'Donnell?