What a whack job.  What kind of idiot would use Grey Poupon to prove a point?  Are you suggesting that only fancy, foreign, John Kerryish types use it?  No real American would use that stuff, right Alan?

Sure, sure, you were just joking around to make a point, a little sarcasm here, a little parody there, with a smidgen of satire thrown in.

Yet, we are not amused.

And neither was MSNBC, which curiously didn’t broadcast your speech.  Hmmmm…..

You have a great future as a blogger, my friend.  Maybe some of those leftie blogs which loooove you will defend you, because they get the joke. 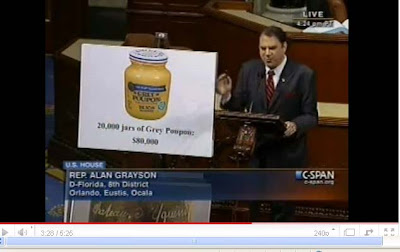 (Comments will be carefully moderated on this post.  Only comments which disagree with me, and think there was nothing wrong with Grayson’s jocularity and use of The Great Yellow Metaphor, will be allowed through.)

"They can buy a her-meez bag"? haha

He is SUCH a dork. Did he consider that maybe these rich peeps might use that money to hire more employees? Or that spending that money stimulates the economy, and keeps people working?

I don't know how rich people and large employer taxes work, but are there incentives for employers like if they hire more people, they get more tax breaks, or something like that? They should do something like every year if you add to your work force, you can pay less taxes. Something that gives employers incentive to hire more people. And tax breaks for employers to bring jobs back to America, and to keep jobs in America.

Gawd, Grayson is a tool.

OK. I can't agree that his use of the "Great Yellow Metaphor" was offensive — at least not any more offensive than the stupidity of his whole statement. He had a lot of fun with math, but failed to make his point. His false dichotomy of jobs vs tax cuts was nothing more than an insult to his audience, with nothing in his comments to even show how he derives this stance. His stance that 'the poor would buy things to help them live, like haircuts' which would produce jobs, while 'the rich would buy things like mustard' which somehow doesn't produce jobs, was weird.

However, like the original commercial that made the image famous, his inclusion of Grey Poupon on the list of things rich people could buy, reminded me that using Grey Poupon could make me feel a little richer, too.

He's a Job creator.
We could hire the unemployed to live with the rich to make sure they're laughing at the not so rich, while they spend their money like the horrible pigs we know they are.

Grayson has Grey Poupon his shoe.

Thou shall not mock Republican's mustard.
http://legalinsurrection.blogspot.com/2009/05/thou-shall-not-mock-obamas-mustard.html

I have to give it to him, though. He is living it up in his last few days. Bucket list.

The more he runs his yap, the worse he looks. His days are numbered.

At $2/box, if Congress uses its monopoly on coersion to confiscate more money from millionaires as proposed by Grayson, then the jobs to produce 40,000 boxes of macaroni per millionaire will no longer be needed. Why Alan? Why the class warfare against the average worker who has devoted his life to making macaroni?

(rough translation of the above):

I would declare and affirm, in accordance with your bi-conditional "commentarious" limiting statement, above, that:

1) I disagree with you and your views on this subject, and

2) I agree completely and unreservedly with representative Alan Grayson (D-Rebuke) a powerful man, and his playful and metaphorically-correct use of the Grey Poupon mustard demo card.

The only reservation I would have is that he made no effort to correctly pronounce this wonderfully elegant condiment – moutarde de Dijon – it was so simple and yet so . . . how do you say. . . triumphant a performance on his part!

Um, wasn't it Obama who famously asked for dijon mustard while out trying to show how he was one of the people?